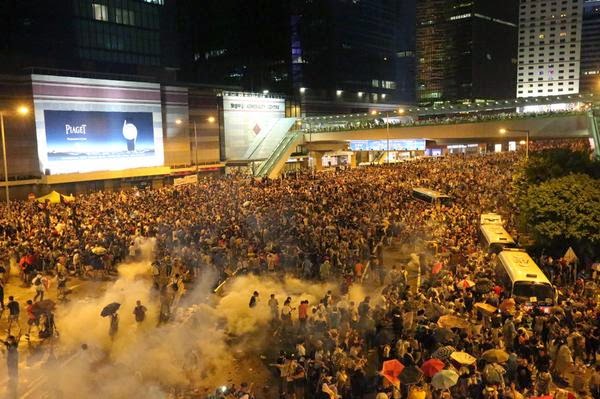 Thousands have taken to the streets in Hong Kong, with clashes between pro-democracy protesters and the authorities escalating. The police used tear gas and pepper spray to disperse the crowds that have besieged the city government headquarters since Friday. The protesters oppose the planned electoral changes introduced by Beijing, which would set up a committee dominated by functionaries loyal to the Chinese government to screen out candidates for the post the city’s chief executive. Pro-democracy groups call the proposal a mockery of the election.

The South China Morning Post reported today that the authorities were struggling to cope with sheer number of protesters, with some of the city’s busiest thoroughfares paralyzed. The Occupy Central, the most prominent groups fighting against the planned electoral changes, said additional protesters are pushing their way to join the main protest site at Tamar Park. The police have arrested nearly 100 protesters since Friday.

Occupy organizer Benny Tai Yiu-ting told the Morning Post “no one would be able to stop the campaign now… It would only end when the current chief executive steps down and the Beijing government retracts it decision.” (South China Morning Post, 28 September) 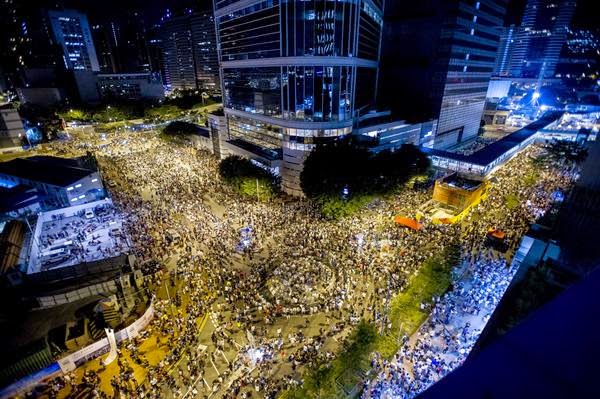 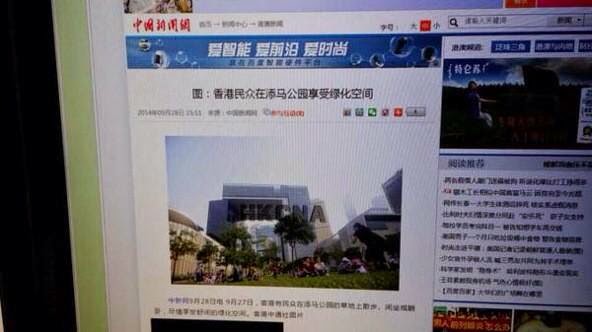 The main issue in Hong Kong protests is Beijing's plan to set up a committee to screen candidates for the city's leadership positions, which will end up screening out those whose view are not the same as Beijing’s leadership. Not unlike Iran’s Guardian Council, dominated by the hard right, who screens out candidates with reformist or moderate political tendencies. As protesters in Hong Kong say today this is a mockery of elections.

Basically this has been happing in Iran by screening candidates who are not against the fascist islamic tyranny.
Well done the people of Hong Kong.

This aspect of the electoral system in Iran isn't that simple. Obviously Rouhani and Aref possessed "moderate" and "reformist" tendencies, with the winner Rouhani winning the presidential election based on his publicly declared "moderate" platform. On the other hand, a potential candidate in the form of Mashei that really defies labeling as "reformist or moderate" was rejected.

Here in the United States we also had an Occupy movement (note the Hong Kong movement uses the same name) with sit-in protests that were eventually broken up by law enforcement at the direction of city officials in New York, Atlanta, Oakland, here in San Francisco and elsewhere. I expect the same to take place in Hong Kong.

The Guardian Council, a non-elected body of hard-right clerics, can disqualify and did disqualify Ayatollah Hashemi Rafsanjani from running for president in 2013. Rafsanjani is a former president, acting commander-in-chief of armed forces during the eight-year Iran-Iraq war, and speaker of Majlis, aside from being a founder of the Islamic Republic. And this Guardian Council does not have to explain its action to the public, or even the candidates. Now if they can disqualify someone at Rafsanjani caliber because they did not like his politics, then you can imagine what they can do with regular candidates. The Guardian Council is a disgrace representing the worst face of the Islamic Republic, and should be abolished once and for all.

-no offense but what HAS China politics to do with Iranian issues ? basically no connections- remember your words -"THIS SITE lowly site is dedicated to Iranian politics if someone have issues with the politics of others Nations then let him visit those site dealing with the issues of that particular country"-