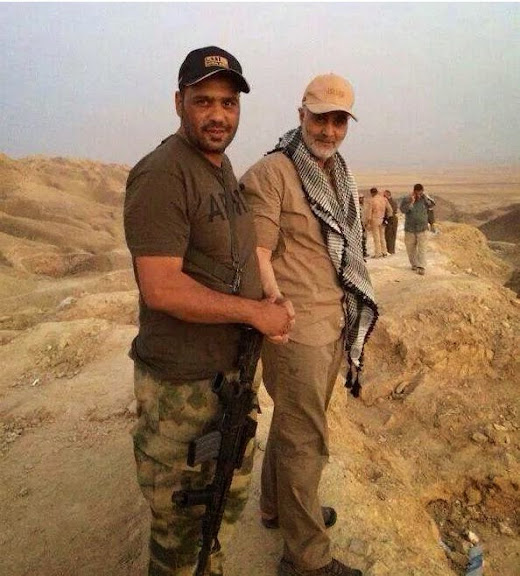 Above: photo depicting IRGC-QF Maj. Gen. Soleimani has emerged on social media claiming to have been taken near Amerli, Iraq. Unidentified person of interest at his side appears equipped with American-type M4 carbine; outfitted in American-style "ARMY" T-shirt and possibly MultiCam trousers.

There have been numerous reports that during the Battle of Amerli, Iranian military advisors provided coordinated assistance to ISF, Peshmerga and Shia militia forces, in a manner consistent with their advisory role in the adjoining Syrian theater of war.
Posted by Mark Pyruz at 1:56 AM

Is the guy on the left wearing a US Army shirt? :-)

Body language appears to suggest the two are being photographed and shaking hands at request of cameraman.

It appears to be an old 90's style U.S Ar,y "PT" uniform T-shirt...Expect it's the wrong color. It should be light grey instead of dark brown. Maybe they dyed it?

An ingenious commander and a true hero of the Iran-Iraq war. We are all Qasem Suleimani!

AnonymousSeptember 7, 2014 at 3:55 PM
Without irans weapons,ammo,military advisers and the shia militias,in short without the boots on the ground and iranian support and logistics us airpower wouldnt amount to much against a mobile and hard hitting enemy like isis,as for us "intervention" this is only because its own frankenstein monster now threatens us interests in the region rather than just syria