Twitter CEO Dick Costolo on Thursday tweeted at Iranian President Hassan Rouhani, who is in New York attending the UN General Assembly, with a Twitter burn for the ages. (Time, 26 September) 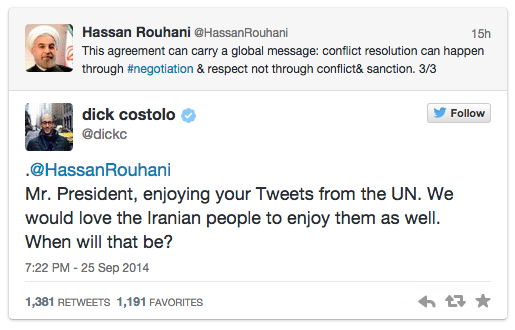 I've noticed all the fanboys of Rouhani are really peddling hard on places like twitter and facebook.Meanwhile more people than ever are being executed back in Iran.Did you also know ayatollah Boroujerdi is facing execution by this maffia theocracy? Rouhani is even worse than that Ahmadi and both are the same as the rest of the tyranny that is occupying Iranzamin.

It's an odd situation. The blockage of Google, Facebook and Twitter in Iran isn't that sophisticated, and many average Iranians inside Iran continue to use these types of social media through the use of proxy servers, even on sensitive topics pertaining to national defense and construction..

This leads me to believe the Iranian strategy is not so much a total blockage. Instead it's a strategy of making it cumbersome to access. I also think the motive for "blockage" is based on the fact that servers for these types of social media are located in what Iranian security officials regard as hostile countries.

I'm of the opinion that with improved relations with the West, this sort of "blockage" would be eased.

Are you saying they don't mind people accessing Twitter and Facebook, just want to make their use cumbersome? You might have a point here. At times I wonder if psychiatrists are better suited to understand the behavior of this regime than political scientists.