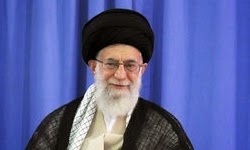 Iran’s Supreme Leader Ayatollah Ali Khamenei today told a group of organizers of the upcoming Hajj that the “defeat” of Israel in the 50-day Gaza war was a manifestation of Muslim power.

“The defeat of the Zionist regime (Israel) in the 50-day war was the defeat of the symbol of Western power in the region at the hands of Gazan people,” Khamenei said. “The Gaza victory proved that Muslims are strong and have many capabilities, can defend themselves and challenge all enemies.” (Fars News Agency, 7 September)

“In the Palestinian issue, the Muslim fortunately have the upper hand,” Khamenei said, without any further explanations.

This guy is in cloud cuckoo land.

Meanwhile the regime (Khameini) approves of "Western power" being used against ISIS in Iraq and Syria.And Israel is still there and will be around as long as mankind exists. Enough of this propaganda coming out of this mans mouth to hoodwick the masses with.

In reference to his anti-West remarks, it's possible Khamenei is engaged in the sort of thing Mao spoke of privately to Nixon in1972, along the lines of "we'll still have to say negative things about you, publicly." Perhaps.

Khamenei was discussing the Gaza conflict in the context of military operations, not popularity or information operations. Hence his pronouncement that the Muslims now have upper hand in Israeli-Palestinian conflict is suspect at best.

Interesting observation on Khamenei's anti-West remarks. But I do not agree with that. Khamenei still considers himself, as head of the Islamic Republic, the strongest anti-Western "revolutionary" in the Muslim world. He has always been vocal about those sets of beliefs and has repeated them in almost every occasion for more than 20 years. It's much safer for us to believe what he says, so there would be no surprises.

Another example of why the Iranian culture's fatal flaw -- its fundamental dishonesty (tarof etc.) -- will lead to its downfall. Iran's culture needs a fundamental change, and a focus on the truth.

why is it difficult to understand that Khamenei is a liar and is lying for what he believes to be a good cause?

So Nader deletes my post, simply because I point out that Khamenei speaks for a "united Muslim world," when he himself isn't even considered Muslim by a huge swath of the world's Muslims?

Take about quashing a difference of opinion.