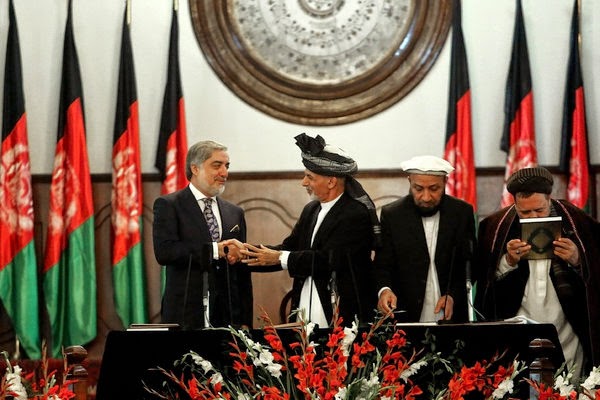 Ashraf Ghani was inaugurated as president of Afghanistan today. He quickly appointed his rival in the bitterly contested runoff election, Abdullah Abdullah, as government’s chief executive officer, a Prime Minister-type position created as part of a compromise brokered by U.S. Secretary of State John Kerry.

President Ghani declared a halt to the degeneration of relations with the United States under the departing president, Hamid Karzai, who refused to sign a long-term deal to keep American troops in Afghanistan.

“Now it’s time that we enter a new era of our relationship with the United States, Europe and other countries of the world,” Ghani said.

Ghani, 65, is an anthropologist by training, and has worked for the World Bank for many years. He is the co-author, along with Ms. Claire Lockhart, of a book on problems facing the developing countries, “Fixing Failed States: A Framework for Rebuilding a Fractured World.”

“Within these countries, vicious networks of criminality, violence and drugs feed on disenfranchised populations and uncontrolled territory,” Ghani and Lockhart wrote, describing how the people in countries from Latin America to Africa and Central Asia are “locked into lives of misery, without a stake in their countries or any certainty about or control over their own futures.” (The New York Times, 29 September)