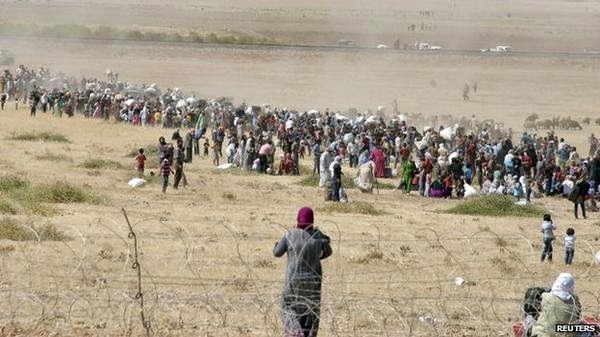 Some 45,000 mainly Syrian Kurds have crossed into Turkey in the past 24 hours as the Islamic State militants advanced in northern Syria. Most fled the Kurdish town of Kobane. (BBC, 20 September)

ISIL has seized 60 villages around the town this week, and were expected to move into Kobane, Syria’s major Kurdish population center. The head of Syria’s Kurdish Democratic Union, Mohammad Saleh Muslim, has appeared for international assistance in the battle against the militants.

“Kobane is facing the fiercest and most barbaric attack in its history,” Muslim said. “the coming hours are decisive.” (Reuters, 20 September)

The capture of the town would give Islamic State control of a large strip of Syria’s northern border with Turkey.

Iran must help them, and deliver them heavy arm