Reported U.S. Proposal on Centrifuges Runs into Trouble in Tehran 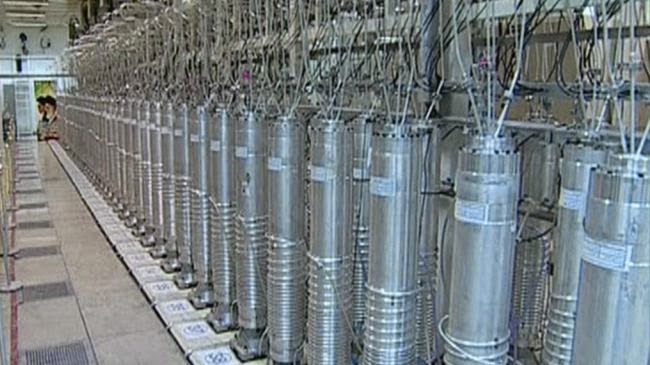 On Saturday, the New York Times reported that the U.S. has offered a new proposal aimed at resolving the disputed issue of the numbers of uranium enrichment centrifuges Iran would be allowed to maintain under a comprehensive nuclear agreement. The proposal calls for Iran to “disconnect” rather than “dismantle” most of its existing centrifuges, literally taking away many of the pipes that connect the machines in a maze that allows uranium fuel to move from one to another, getting enriched along the way.

The U.S. proposal would allow Iran to save face and claim that it wasn’t dismantling the centrifuges.

But the plumber solution to Iran’s uranium enrichment capacity is apparently running into trouble in Tehran. The Los Angeles Times reported on Sunday that the proposal was meeting skepticism from conservatives and moderates alike. The paper reported that an influential conservative analyst, Alireza Karimi, has described the proposal as a “stunt” aimed at “deception of public opinion.”

Iran would be left with only “window-display enrichment,” Karimi told Fars News Agency.

Iran currently has some 19,000 centrifuges installed in its enrichment facilities, with 10,000 in operation. Even if the “disconnecting” approach was accepted by Iran’s nuclear negotiators, it would not satisfy the supreme leader’s demand that Iran must maintain some 190,000 centrifuges to independently fuel its Bushehr nuclear power reactor. Karimi also brought up that issue, saying the proposal wouldn’t bring Iran closer to satisfy its needs for electric power generation.

A reformis analyst, Nader Karimi Juni, was also quoted by the Los Angeles Times that the he saw the new proposal as a “window dressing aimed at easing a public-relations problem.” He added any proposals need to meet the requirements of Supreme Leader Ali Khamenei that Iran be allowed to develop an industrial-sclae enrichment capacity.

Meanwhile, Iran and P5+1 nuclear negotiators are expected to resume their talks in New York later this week.

File photo: Iranian IR-1 centrifuges in operation at Natanz enrichment facility. Note the maze of pipes connecting the machines. A new proposal would disconnect the pipes, instead of dismantling the machines. (Photo: IRNA)
Posted by Nader Uskowi at 9:13 AM

Bottomline is: Iran must not be allowed to have break-out capability! On that point there can be no compromise whatsoever! That requirement will be achieved either through the use of force or through diplomacy. Iran's got a choice...don't wait until it's too late! You have a golden opportunity, so dont let it pass you by!

Use your head and put aside your ego. If attacking Iran was that simple the US would have done it a long ago.

This NYT reporting tends to support the argument that "industrial-scale nuclear program" is not a buzz word exclusive to IRI far-right politics, and not a far-right political focus predominantly concerned with positioning going into the next election.

That U.S. negotiators would publicly disclose this as a "face-saving" measure suggests belief in the false narrative that the Iranian economy is "devastated" and they're desperate to surrender the nuclear fuel cycle, or that the public disclosure is a negotiating tactic attempting to offset Zarif's reported public relations success on the matter.

Was this a surprise from the regime? No.

Sorry to burst your bubble but iran has had a breakout capability for quite a while now,its just a short hop from 20% to 90% and if iran really wanted the bomb there would be little the us or anyone else could do to stop it,but I do agree with one thing the us does have a "golden opportunity" so lets hope they dont let it pass them by,tho personally I dont have much hope myself

The "industrial-scale" uranium enrichment program is exactly the buzzword of the hard right. No one in the moderate camp has ever advocated increasing the number of operational centrifuges from 10,000 to nearly 200,000, which is what Khamenei called for in his speech a short time prior to the original 20 July expiration of JPOA, and that became Iran's "red line," with the moderates apparently having no choice but to follow the leader.

What the Los angeles Times report indicates is that even the moderates believe the negotiating team can not possibly cross this red line (because they are much weaker than Khamenei and the hard right). That's a far cry from saying that the moderate also agree with the red line and the policy itself. So, yes, the proposal to increase the current number of centrifuges during the lifetime of a future comprehensive agreement from 10,000 to 200,000 is a hard-right's buzzword.

The U.S. face-saving scheme probably will not have any realistic chance to succeed if the negotiating team follow the red line set by Khamenei and insists that the P5+1 accept to have Iran to install and operate 200,000 centrifuges during the period when the comprehensive agreement is in effect. Iran can probably should consider operating 200,000 or 2 million centrifuges at the end of the agreement, which will have a sunset clause.

" If attacking Iran was that simple the US would have done it a long ago."

it isn't simple, but it's not too difficult for the US.

anyone in Iran who thinks that the US wouldn't or couldn't is fooling themself or being fooled by other fools.

Sadly the west has gone from a policy of zero enrichment to one of perhaps allowing iran a "toy" enrichment program of a few hundred to a few thousand centrifuges,unfortunately the western narrative is that sanctions "forced" an iranian "surrender" which conveniently ignores the fact that iran has always been willing to negotiate but the west had to drop its preconditions.Frankly the whole idea of the "plumbing" option is laughable its like irans temporary suspension of enrichment which to the west was a face saving code word for permanent halt to enrichment,personally I think that the best the west can hope for is a freeze on the current number of centrifuges certainly no reduction in the numbers

Firing cruise missiles and lunching drones may be simple, but what about the day after? If the benefits outweighed the costs, the US would have done it by now.