Iraq Urges World Community to Take the Fight against ISIL

At Paris Conference Attended by 26 Nations 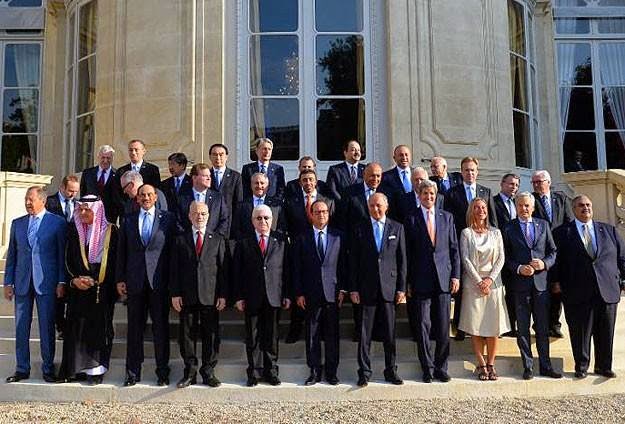 President Fuad Masum of Iraq urged world community to take the fight against the Islamic State who has occupied much of his country to neighboring Syria. He made the comments in a speech to the leaders of the coalition against ISIL gathered in Paris today.

“We must not allow them to have sanctuaries,” Masum said at the opening of an international conference on ISIL. “We must pursue them wherever they are.” (The New York Times, 15 September)

“The Iraqis’ fight against terrorists is also ours,” Hollande said. “There is no time to lose.”

Paris conference is a gathering of 26 nations plus representatives from the UN, Arab League, and the EU.

Iran did not attend the conference. The French initially opened the door for possible Iranian participation, but the American officials opposed the idea, emphasizing that Iran’s Quds Force and other military and intelligence units have been deeply involved in the Syrian civil war, supporting Assad and fighting against the Syrian opposition, which has also been one of the main targets of ISIL in Syria.

Iran has criticized the Paris conference, proposing that Assad’s government should have also attended the gathering.

Photo credit: Global coalition against ISIL. In the middle, front row: co-chairmen of Paris conference; Presidents Masum of Iraq and Hollande of France. Secretary of State John Kerry, Iraqi FM Ibrahim al-Jaafari, and other foreign ministers of the coalition are seen in the photo. (AFP)
Posted by Nader Uskowi at 7:22 AM