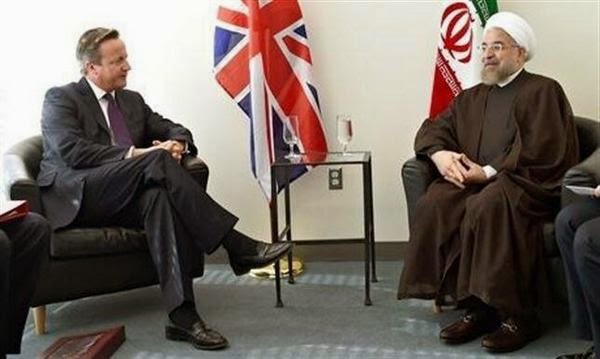 Iranian President Hassan Rouhani and British Prime Minister David Cameron met today in New York on the sidelines of the UN General Assembly. The meeting was first between the heads of government of Iran and Britain in more than 35 years. They called for closer bilateral relations between the two countries.

Rouhani also met with EU Foreign Policy Chief Catherine Ashton, who also acts as the chairperson in nuclear meetings between Iran and P5+1.

Meanwhile, Rouhani told a gathering of the New American Foundation, a policy think-tank, that all parties involved in nuclear talks should take advantage of the “historic opportunity” to reach a comprehensive agreement. He said that the two sides should first finish the plan they have embarked upon, the nuclear deal, and then look for cooperation on other areas.

Islam has retarded Iran's culture. Let these 15 percenters talk to the West and enjoy their last moments.The writing is on the wall for all of them.

I agree. However, I guess Islam or whatever that caused this upheaval back in 1979, has been abandoned since. The current polarization is money. There are those in Iran whose smuggling operations would be badly affected should Iran normalize its relations with the world including UK. Illicit trade and sanction busting is big business in Iran. That is what Islam has turned up to be. The factions in the Iranian regime are fighting for one thing only: money. Mullahs and Bazaris have become very rich out of war and economic sanctions and some like to keep the status quo since it is not the people of Iran they care about. Their Islam resides in their pockets. Subsequently normal relations with the west will benefit most Iranians, but obviously not this money loving faction.

Very good analysis, normally people forget the money dimension when they talk about the situation in Iran and only concentrate on Islam or ideology. Some people whose net worth was probably 1000 dollars in 1979 are now worth several billion dollars. And hundreds of thousands have net value of several million dollars. People drive cars worth 200 000 USD on the street of Tehran who for just a couple of decades ago didn't even own a car in the entire family. So all in all certain "maffia" groups have become extremely wealthy and much of that due to sanctions.