He Says He Opposed U.S. Request to Cooperate with Iran on ISIL 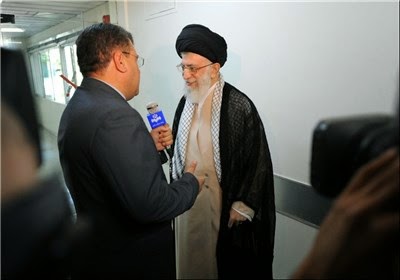 Iran’s Supreme Leader Ayatollah Ali Khamenei today told the state-run TV that the claims by the U.S. that it was fighting the ISIL were “baseless.” Khamenei added that he had “fun” in the hospital hearing the “lies” of the Americans fighting the ISIL in Iraq.

“During these days that I was hospitalized, I had fun hearing U.S. officials talking about fighting the ISIL (in Iraq). It was a true comedy,” Khameni said. (Tasnim, 15 September)
Khamenei made the comments while being released from the hospital after a prostate surgery.
Khamenei also said that the American ambassador in Iraq had asked the Iranian envoy to arrange a meeting between the two countries to discuss ISIL, but he opposed such meeting.
“During the early days of ISIL attacks in Iraq, the U.S. ambassador through a message to our envoy in Baghdad requested a meeting to discuss the ISIL. Our ambassador in Iraq sent that request to Tehran. Some of our officials did not have any opposition to such meeting. But I opposed it and told the officials that we would not cooperate with the Americans regarding ISIL, because their intentions and actions are ugly, and how could we, under those circumstances, cooperate with them,” Khamenei said.

“The U.S. Secretary of State also had personally asked Dr. Zarif (Iranian foreign minister) that the two countries should cooperate on ISIL, but Dr. Zarif had rejected his request,” Khamenei added.

“They (the Americans) are now telling a lie that they did not invite Iran to the (anti-ISIL) coalition; the truth is that Iran had from the very beginning had announced its opposition to the coalition,” Khamenei said. (Tasnim, 15 September)

Khamenei said Washington wanted in Iraq what it had in Pakistan – “a playground where they can enter freely and bomb at will.”

I couldn't agree more. In last week's speech outlining his "strategy" for fighting the Islamic State, Obama explicitly compared his approach to his strategies in Yemen and Somalia.

Yemen and Somalia? Two failed states? Where the US acts with total impunity, sending drones, war planes, and special forces to kill anyone whom the US deems to be a threat - including entire families, wedding parties, and children? Where hundreds die every month in low-level civil wars that go unnoticed by the Western media machine?

Before the foreign-backed insurgency in Syria broke out, Syria's healthcare and education systems were among the best in the region; women had equal rights; and ethnic and religious minorities co-existed peacefully. Yet now, after funding, arming, and politically supporting the Syrian opposition, the US compares the country to Yemen and Somalia.

What a joke. The US is totally clueless and the biggest threat to the security of the Middle East.

The reality is that the Iranian military and Iranian-backed militias, including Lebanese Hezbollah, and not the U.S., are among the foreign forces deeply involved in the fight on Syrian soil, and involved there for nearly three years. Then do the Iranians and the foreign militias under their control, along with the Syrian military and the opposition, have responsibility for having turned Syria into a failed state?

No where have I said US actions are what caused Syria to become a failed state. My point was that by using tactics that have garnered no real results in Yemen and Somalia, it makes no sense to believe they will work in Syria. In fact, with so many factions involved, including hundreds of militias and over half a dozen States with vested interests in Syria, one wonders what Obama is really thinking if drone strikes and raids are what the US has in store in Syria and Iraq. It seems the US does not care at all about the sovereignty of any other country. Just as they bomb targets illegally in Pakistan, so too have they threatened to do so in Syria. (Obama has warned that Assad shooting US warplanes in Syrian air space would lead to his overthrow.)

I am not advocating U.S. military intervention in Syria. You are arguing emphatically that if the U.S. intervenes, it will be detriment to Syrian nation. Well, the U.S. has not intervened yet. Can you say as emphatically that Iran's intervention in Syria; Quds Force, IRGC and intel operatives, as well as large numbers of Shia militias under the command of the Quds Force, involved in the fight on Syrian soil for nearly three years, are also detrimental to Syria and its sovereignty? Or do you think Iran owns Syria, and as such is exempt from your concerns.

Nor am I arguing Iran's position on Syria is morally sound - morals do not play a role in geopolitics.

At this point, yes, I do believe an overthrow of Assad is not beneficial for Syria as there is no real alternative. We know that "moderate" groups in Syria have been utterly gutted, with Islamic Front and IS representing the bulk of the Syrian opposition today - both anti-democratic Salafists. Even within the "moderate" factions we hardly see any real challenge to jihadists. Jamal Maaroufm, the leader of the Syria Revolutionaries Front, told reporters "I am not fighting against al-Qa’ida (Jabhat al-Nusrah)… it’s not our problem." I read a previous comment where you claimed there are many potential leaders that could replace Assad and his dictatorship... who are these leaders? What are their credentials? What group do they belong to? How are they legitimate? As the US has found out 3 times now in the past 15 years, following the violent overthrow a government, the government in exile immediately stepping in doesn't always go the way you want it to. The FSA and SNC had no real post-Assad plan that wasn't based on their own wishful thinking. For example they thought putting on paper some assurances to Alawites (often with disclaimers such as 'without blood on their hands') would completely wipe the slate clean and there'd be no regime loyalist insurgency or reprisal killings. Yet after about January of 2012, it was clear that was not likely to happen. They persisted in the face of a changing reality.