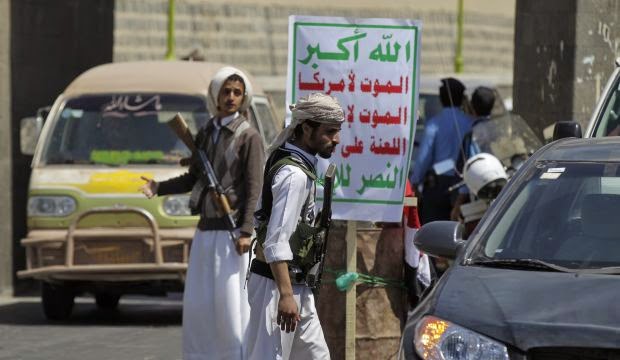 Asharq al-Awsat reports that several Iranian military personnel, probably IRGC or IRGC-QF officers, who were detained in Yemen, were released on Wednesday after the Huthi rebels took control of the country’s national security headquarters where the detainees were being held. The Huthis are in control of most of the Yemeni capital Sanaa.


The Iranians were the crew of the Jihan 1, an Iranian ship that was captured off Yemeni coast in January 2013 for smuggling a large cache of weapons into Yemen. Yemeni security sources told Asharq al-Awsat that the Iranians were affiliated with the IRGC.


Meanwhile, Yemeni authorities released two other Iranians they arrested earlier this year at Sanaa International Airport on charges of training Huthi insurgents, AFP reported on Thursday. The release of those two Iranians was secured after meditation efforts from Oman. They left Sanaa airport on board an Omani plane. (AFP/Asharq al-Awsat, 25 September)


On political front, Yemeni President Hadi appointed two new presidential advisors from the Houthi Ansar Allah organization and the Southern Yemeni secessionist movement, Al-Hirak. The government also cut fuel prices by 15 percent, a major demand of the opposition. After the price hikes in July, a number of protest camps across the capital were set up, manned ny the opposition for over a month.

NADER-
-the first two lines are visible,they read, yes- 'God is great', 'death to America' . but the next two lines are not fully visible , why do you finish the lines on your own?

Placard can be seen here:

I'd describe this as a slogan rather than a logo.

The Huthis describe it as their official "logo." The logo, of course, contains five sets of slogans. Their logo is a manifestation of the backwardness of their movement.

B.M.A., read the post again. I noted the Huthis' logo was on display at the checkpoint. On the next sentence, I described what the group's logo contains, five sets of slogans, translated from Arabic. The picture above is not the only source to see what their logo is in its entirety! Before denying the fact, you could have at least checked the Wikipedia.

Uskowi
-yes I have checked them on wikipedia -[thanks MARK too for the effort]-BUT dont you see that by highlighting this logo ,you are only whipping emotions and depicting them as a dangerous entity , effectively erasing the fact that these people are VICTIMS of a historical injustice in YEMEN ?

Did it ever occur to you that the fault here might be with a group that proudly display an overtly racist logo? They are capable of taking over the country and arrest the leaders of rival opposition groups, but incapable to change their logo? So pls send your note of dismay not to this messenger but to the group itself, and while you are at it pls copy the Quds Force, as they are the main supporters of the Huthis, funding them and arming them.