For specific types of air-to-air encounters, this Iranian UCAV type might be seen as a very low cost solution of sorts, in terms of cost to manufacture, operate and potentially lose due to attrition or hostile fire.

More suiting, perhaps, this specification appears to offer a solution for allied fighting forces in southern Lebanon (possibly even southwest Palestine); forces that have persistently lacked air-to-air fighter capability. Iranian-type UAVs have been deployed in these theaters with varying levels of success, thus a comparatively low cost system represented by the Sadegh might be considered the next logical step, particularly against hostile rotary-wing aircraft. 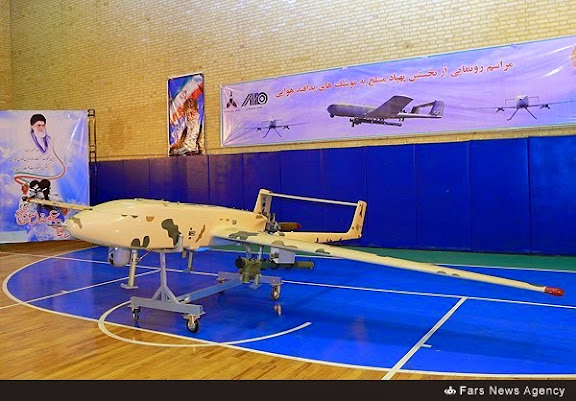 
Photos: Fars News Agency
Posted by Mark Pyruz at 3:16 AM

I fail to see how a slow speed Mohajer-4 UAV can be used as a successful platform against other much faster UAV's deployed by forces around Iran?

Iranian UAVs are not different from others in the classification and purpose of use. What you see here is a UAV which is highly maneuverable and which is supposed to cover the task of surveillance in a limited area and for long hours. As such you don't put a jet engine on the UAV and compete for the speed, but rather for the endurance and specific equipments (air-to-air fighting capability).

Sadegh can also be Translated as Sincere. As in Sadeghaneh --> Sincerely. I think in this case it meant a "Sincere" response as in no beating around the bush :) Kaboom :)

Mohajer can also be Translated as Traveller. It makes more sense in this case. It is a traveller from Iran that gets intel. It's not an immigrant :)

Direct word for word translations frequently don't work. I learned that when I was 7 years old trying to explain to my headmaster why I was mad about about some rude kid calling me "Father Dog" (Pedar Sag) LOL. Poor guy must have thought I was nuts :D

Seriously, if people are making a living translation this stuff I'm throwing my hat in too. I can do as well as this example after a half dozen shots. Just saying ... Mean it in a good way ... No offence :)

Good points indeed, although I think you need to pay attention to the fact that the names used for Iran's armed products often if not always have Arabic origin. This strategy is used in order to get a better marketing in the Arabic and Islamic world which is the focus of the Iranian regime, although some people inside the country, especially in Army, are less happy about this (including some IRGC folks).
As such some of these names might have a different meaning in Persian (as they are adopted loan words) than in Arabic (the original language). Having said that my understanding is that the translations normally are good and this case the translation for "Mohajer" is indeed "Migrant" which is correct both from Arabic but also Persian. You indicated "Immigrant" which is a "Migrant" coming into a country (as opposed to Emigrant), Migrant in English is the word for both of them, i.e. Immigrant and Emigrant. As such this is basically someone who has no particular intention other than just "migrating around". Therefore this is a "perfect" naming for the purpose of this UAV which I also indicated in my response above to another post regarding the mission and purpose of this UAV.
As per your suggestion "Traveler" in Persian is "Mosafer" which indeed has an Arabic origin "Al Mosafer" and it is not "Mohajer". A "Traveler" is someone with a detailed route plan and a clear destination, this is not the mission or purpose of the "Mohajer" UAV as it is used for "flying around" and detecting/monitoring randomly without any plan or destination and when necessary take action.

You're right. I'm not an Arab; but, your argument about Mohajer versus Mosafer makes sense. Still the Sadegh one was clumsy.

Either way, nice hardware. They do the job, and they're cheap.