No Specifics on How Sanctions Are Removed 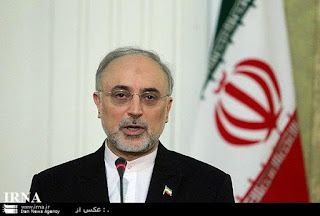 “With the measures devised by the [Iranian] diplomatic apparatus, from today we will witness the gradual removal of the sanctions,” Salehi told reporters on Sunday. (ISNA/Press TV, 3 March)

The Iranian foreign minister might have in mind a future compromise with the West during the upcoming meetings in Istanbul and Almaty on Iran’s nuclear program.

This is a victory for the IR of Iran. The Imperialists used to say "not a single centrifuge will be allowed in Iran". Now look how far Iran has come! Fordo underground facility stays active. Iran can enrich to 3,5 percent for electricity generation, and it looks like the Imperalists will have to accept Iranian enrichment of 20 percent Uranium to limited amounts for medical purposes. Iran came out victorious from the first stage of the negotiations! A great start indeed! The Imperialists are begging at the feet of the Iranians not to proceed as they have done up until now - the production of very large amounts of 20% (they have enough to build at least 2 nuclear warheads, if enriched further, which can be done). They are scared to death that Iran might build a nuclear weapon, and they know that they cannot do anything to stop it from happening, the Iranians can really take that step. Therefor the Imperialists must appease and move closer to the Iranian point of view, not the other way around!

He is making statements about things which don't lie in his hand; so they are worthless...

Perhaps the U.S. is just really tired of its 34 long years of empty 'barkings' and 'threatenings' against IRAN, the most sovereign state in the whole region of the Middle East. Or maybe, it's a kind of a dirty tactic or trick. IRAN should be in full alert always when it comes to the so-called U.S.

Iranian govt is making a lot of noise about some imaginary victory, so it's quite likely that they're about to sign a compromise that will not remove any of the main sanctions for quite a while.


as the terms offered to Iran are not at all generous, it's also likely that Iran might simply be announcing that an agreement is close but won't sign one, in hope that they'll be offered better terms.

The "other side" seems far less rosy about this...

"No Specifics on How Sanctions Are Removed"

Actually, that's inaccurate. The Iranian foreign ministry as well as unnamed U.S. State Dept sources have stated the specific sanctions that are being discussed. I provided a quote for one statement from the IRI-FM in one of your previous posts, Nader.

It's another time for fingers crossed. Hopefully the U.S. is sincere this time around, and will accept a compromise. The Iranians have been offering compromises the entire time. Any neutral observer recognizes this.

It's all about Iran's sovereign right to the nuclear fuel cycle.

Salehi did not say which sanctions are being, or soon going to be, removed and how. But a movement toward compromise has started and Salehi was probably referring to agreements expected to be reached in Almaty in April based on proposals made in February. If this is what he’s referring to, it’s the most positive development in the nuclear dispute between Iran and the West in the past eight years.

Iran is now chasing the carrot.....soon they will feel the stick!!!
Go Israel Go!!!

It's going to be particularly delicious when this issue is settled and the expatriate fifth-columnists have to cry themselves to sleep at night. :)

You seem like a moron par excellence! The Zionist entity is a one bomb job and will disappear in a nano-sec. BTW, your Zionist buddies are only good at killing defenceless civilians and have been merely barking at Iran for 34 years.

On a more serious note, most Eurasian media is reporting that Russia, China, India, Asian and Latin nations are already ignoring the toothless sanctions and now even they will be lifted officially. Many EU nations including Germany, Spain and even France are doing lucrative business with Iran. Only the US under Zionist control has been the loser and its sequestered economy is imploding.

Anon 6:42--- your own comment is far more moronic that the one of which you complain.

my hope is that it really wasn't representative of your thought and attitudes.

Seems like I touched a raw hasbara nerve eh. You Zionist scum really are pathetic. Even the most crazy nutter knows that the pip-squeak Zionist entity squatting in Palestine is NOT CAPABLE of "attacking" Iran. 5 million imported Jews, alien to the region and mankind are on STOLEN LAND & BORROWED TIME ANYWAY. Now go and do what you Zionists do best: KILLING UNARMED ARAB WOMEN & CHILDREN and STEALING THEIR LANDS.

What some of you IGNORANT one dimensional Iran-hating crazies don't realize is that a country the size of Iran sitting on top of the global energy jugular was not "sanctionable" anyway. The FACT is that US is now a deadbeat and China is about to destroy the remaining pathetic US deadbeat economy sucked dry by Zionists anyway. Iran's major trading partners are now all in Asia and China is now increasing cooperation in every field. At least try to buy a newspaper once in a while and have a grown-up read to you. The US is bankrupt and despite cutting jobs at home is paying the Egyptian military $450 million ( Kerry the joker announced in Cairo, all borrowed from China) to protect the Zionist entity from Egypt. US debt under puppet Obama grew by $6 TRILLION to now around $18 TRILLION. The deabbeat US economy or lack of it is now shrinking at about 2% in real terms and is now one of the most unproductive economies in the world with 100 million people on some sort of welfare and foodstamps. This has not stopped the idiotic US warmongering as its military and homeland police state now eats up over $1.3 TRILLION of wasted expediture annually. China more than likely is already the NUMBER ONE ECONOMY. So my crazy lovelies, Iran is not about to be sanctioned or "attacked" by anyone.

Yi Gang, deputy governor of China's central bank, delivers a speech at a seminar in Tokyo, on October 14, 2012. Yi said Beijing is "fully prepared" for a currency war as he urged the world to abide by a consensus reached by the G20 to avert confrontation, state media reported on Saturday.

AFP - A top Chinese banker said Beijing is "fully prepared" for a currency war as he urged the world to abide by a consensus reached by the G20 to avert confrontation, state media reported on Saturday.

Yi Gang, deputy governor of China's central bank, issued the call after G20 finance ministers last month moved to calm fears of a looming war on the currency markets at a meeting in Moscow.

Those fears have largely been fuelled by the recent steep decline in the Japanese yen, which critics have accused Tokyo of manipulating to give its manufacturers a competitive edge in key export markets over Asian rivals.

Yi said a currency war could be avoided if major countries observed the G20 consensus that monetary policy should primarily serve as a tool for domestic economy, the Xinhua report said.

But China "is fully prepared", he added.

"In terms of both monetary policies and other mechanism arrangement, China will take into full account the quantitative easing policies implemented by central banks of foreign countries."

South Korea's incoming president Park Geun-Hye has also signalled her willingness to step in to stabilise the won and protect exporters battling a stronger Korean currency and a weaker yen.

The Chinese can destroy the US economy at will now.

Anon 8:14
As you know Iran has been occupied by Islamist scumbags and is being gang raped and pillaged on a daily bases for over 34 years now.
Also I would add that the Islamist rapists are no better or worse in their handling of the poor Iranian population in their use of public lynchings by construction cranes,amputations by mechanical devices invented by Islamist butchers,imprisonment,rape,torture and executions in hidden dungeons located in unknown locations throughout this Islamic paradise of occupied Iran.

obviously, the oil is not being sold because of the sanctions, knucklehead. it's quite "sanctionable".

Any military interference by the Zionists and their western servants, will serve as an immunization shot for the Islamic Republic, to strenghten on's unity of the Nation and rally friends around the world to its defense !!!!

should the west decide to interfere militarily with Iran's nuclear weapons program it will result in the Iranian theocracy being driven from Tehran.

and BTW, Iran hasn't any friends around the world. other than Assad and Lebanese Hezbollah and some other small-time crackpots,Iran is bereft of support.

US is bankrupt and deadbeat in hawk to China, so now go back to sleep. LOL.

Agreement based on West's proposals made in February would be an acceptance of a joke.

Any agreement has to stipulate a deadline for the lifting of all financial and oil restrictions (sanctions) as well as disclosure of any other conditions.

I would compare Uskowi's statement that "it's the most positive development in the nuclear 'dispute'..." to his previous excitements that Netanyahu drew the red line at his UN speech and that Russia had thrown Assad under the 'bus'....or that Iran has to come to terms with the West.

One in order to create a judgment (opinion) has to follow a logic.
The West's February proposals, with their lack of the logic, made them a joke at that time of the proposal.

They play a "poker game" like they tried (and failed) with the DPRK.
At that time the goal was that the starved North Korea's population will make a "regime change" and here too, they expect the same.
They want to create similar "agreement" which may not be honored in the future (when the Republican party will come back).