Too Good to Be True?

An Israeli Perspective on Obama’s Visit 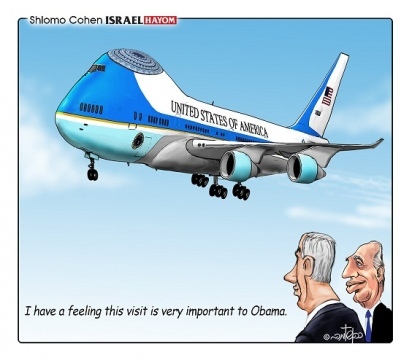 “Obama embraced, flattered, promised lavish aid and spread amity and love all the way to Jerusalem. Even the disagreements on Iran – he has wrapped them in cellophane. But ultimately, the President of the United States wants to delay an Israeli attack on the Iranian nuclear facilities and perhaps, reach a settlement with the Palestinians in other ways, sweeter than honey – and he also has a prominent domestic American interest. Meanwhile he's buying anew the hearts of the Israelis.”

Obama’s pathetic approach to America’s subservient relationship with an isolated and failed Zionist entity and the lack of any peace effort is an ample display of US irrelevance in the new Asia centric world. The real omen was the embarrassing mechanical breakdown of Obama's armored US built limousine at the airport and its similarity with the overall state of US in the new Asia centric world order. While Obama was pandering and doling out aid to the Zionists, the leaders of Chinese and Russian superpowers were signing lucrative economic deals and creating the largest and most prosperous economic, military and strategic alliance in human history.

China also announced that it had increased oil imports from Iran by 81% since last year and had given Pakistan a $500 million loan to complete the Iran-Pakistan oil and gas pipeline. Looks like US can only make "friends" with aid dependent failed charity cases like Israhell and Pakistan. No wonder the US is broke and bankrupt.

Most world media dismissed the lackluster Obama’s trip to worthless Israhell and Jordan as political farce and merely a “photo op.”

If Obama is so “pathetic” and Israel is such a “failed” state as you claim, why are you then so angry? Especially when your superpowers of choice are doing so well. That aside, what did you think about the article? Did you read it, or did you just made your comments (slogans) based on the title?

Since you don't like hearing the TRUTH! Perhaps you can enlighten us with the "success" of this pathetic mission? Perhaps the Zionist parasites got more aid while Americans go hungry. GREAT ACCOMPLISHMENT INDEED.

Same question from you: have you read the article? Or are you supposed to comment on any post related to Israel? Pathetic might be the right word!

Nader Joon, I read everything on your blog and may not agree with some of your lopsided analysis but this article is not saying something which I have not stated before, US is all a show pony with no susbstance. This is the Zionist perception and by the authors names they are Ashkenazi Jews of Hungarian and Russian descent.

The U.S. President comes to Israel well-equipped, with huge gear and knowledge. His entourage of the White House and Secret Service personnel bring here with them the entire country, from personal spoons and forks for the President's use, to phone lines, computers, printers, sophisticated technological equipment and of course, the famed black box with the red button, that entered the sitting room of Sara and Benjamin Netanyahu with the officer accompanying Barack Obama. The event, by the way, quite frightened some of those present.

In other words Obama is wasting deadbeat US taxpayers money for no gain all a farcical show. This is the type of Hollywood glitter that put the bankrupt US in the global doghouse and turned it into Bangladesh of the Americas. No wonder the US police state is buying 5 billion 5.56 and 9 mm rounds to face the ultimate implosion. Stay tuned my friend.

I am glad you read the name of the author and could offer your brilliant analysis on the author’s national origin and saying that the author of a post that has had the subtitle of an Israeli perspective on Obama’s visit was offering “Zionist” perception of Obama’s visit. Wow!

My dear Israhell is based on ugly Zionism thus it is a Zionist state and hence any perspective from them is Zionist. Perhaps you should brush up on the wicked Zionist ideology as espoused by Theodor Herzl, Ben Gurion and the later generation of land grabbing, bank fraudsters and organ harvesting savages. One has to face the facts and not kow-tow all the time, just because you unfortunately live in AmeriKa. You can only fool some of the people some of the time.