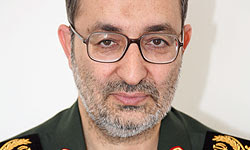 Deputy Chief of Staff of Iran’s Armed Forces IRGC Brig. Gen. Massoud Jazayeri said today in Tehran that Israel’s apology to Turkey was a “new US game” meant to “undermine the anti-Israel resistance movement in the region.”

“The Zionist regime's (Israel’s) apology to Turkey is a new game by the United States, the Israeli regime and Turkey to further affect resistance in the region, the Islamic Awakening in particular,” gen. Jazayeri said. (Fars News Agency, 23 March)

In a move brokered by President Obama during his visit to Jerusalem on Friday, Israeli Prime Minister Benjamin Netanyahu phoned his Turkish counterpart Recep Tayyip Erdogan to formally apologize for a deadly commando raid on a Turkish ship in 2010. Erdogan, on behalf of the Turkish state, accepted the apology. The sudden reconciliation between the two regional heavyweights resulted in restoration of full diplomatic ties and reinstating of ambassadors between Turkey and Israel, which will have huge implications in the politics and relations in the region.

What a Loser ! His job is to defend a Psychopath who is his boss (lol) ...

Verily, Turkey, with its own fool, blind and mistake, has been simply made a 'scapegoat'. And obviously, with the U.S.'s consent and interests in the region, it is all 'a out-of-date drama' of the millenium. What poor turkish leaders!

The "poor" Turkish leader is now arguably the most influential leader in the Islamic world. What Erdogan has done for Turkey is unparalleled since Ataturk. The country is prosperous at a level no one could have thought possible even a decade ago, a country without a drop of oil or other energy resources. If the model of an Islamic government is what he has set up in Turkey, then I hope other Muslim countries can follow. Attacking Erdogan as a puppet is silly and shows ignorance of Turkey's rapid rise as a major regional power.

I hope your comment was a joke and literally tongie in cheek. Turkey is the most despised state in the Muslim world and the region. It has gone from schizoid Erdogans ZERO PROBLEMS with neighbours to 100% problems with everyone including Armenia, Russia, Iran, Syria, Iraq and even China. Let hyperbole rest at the local chai khaneh matey. I know you are an emotional sort of bloke, but that was too much.

Glad to have an anonymous chai-khaneh psychologist on board! Erdogan was billed by Iranian officials and pro-government commentators as a hero after Turkey and Brazil offered a plan to end the Iranian nuclear dispute in 2010. Now he is “despised” by the same people because his Syria policy is different than Iran’s. All the sloganeering offered here is to obscure the reason behind “despising” Erdogan by that part of the Muslim world who believes Assad is their hero and should be defended at all cost.

No problem in dispensing my wisdom to the chai-khaneh set. I suggest you read Stephen Kinzer's book of Iran-Turkey as well as Greek and Armenian perspectives on Turkish duplicity. Turkey is a weak state beset by problems and a military that is on edge with over 300 officers in jail for anti-AKP views and threats of coup. This Erdogan has proved to be an complete short-sighted buffoon. His Syrian misadventure will haunt Turkey for a lone time.

While the Neo-Ottomanist front in Turkey led by the US created nominally "Islamist" AKP has largely failed to kick-start the revival of an empire known for its profound brutality and corruption, Ankara’s recent belligerent policies have done irreparable harm to its own reputation as well as to its ties with its neighbors. Turkey’s alliance with the US, France, Britain, Saudi Arabia and Qatar to fuel the flames of the deadly violence in Syria has made Ankara more isolated in the region and target of blowback. Its failing efforts to weaken Syria have also paved the way for a possible Zionist aggression against regional states as Obama orchestrates a detente between the regions two prime US surrogates.

Turkey’s betrayal of its neighbors will never be forgotten by Muslims or regional states, nor will it be forgiven, just as memories of its brutal massacre of Armenian women and children one hundred years ago still haunt political remnants of the Ottoman Empire to this day. Today's fractured Turkey has 100% problems with all its neighbours.

Turkey done a good job to make up with Israel.
Iran has a loser regime in charge.