The Cyrus Cylinder in Washington 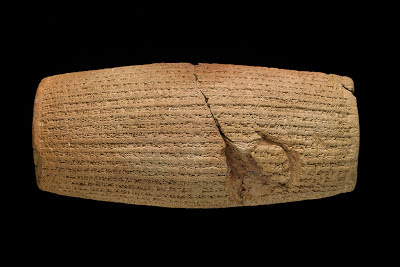 The Cyrus Cylinder, on loan from the British Museum, makes its US debut today at the Sackler. It is shown with a number of key items that offer insight into the religious, cultural, and linguistic traditions of the vast and powerful Achaemenid Empire (539–331 BCE) founded by Cyrus the Great.


The Cyrus Cylinder and Ancient Persia: A New Beginning is organized by the British Museum in partnership with the Iran Heritage Foundation and the Arthur M. Sackler Gallery, Smithsonian Institution. To learn more about other U.S. venues, please click here.

A short description of the Cylinder from Freer-Sackler website:
“Modest in scale and appearance, the Cyrus Cylinder is one of the most important and iconic objects in world history. The origins of this baked clay object can be traced to the Persian king Cyrus the Great’s conquest of Babylon in the sixth century BCE. It bears an inscription, written in Babylonian cuneiform, that claims Cyrus’s victory over the last Babylonian ruler, Nabonidus. Also in this text, Cyrus declared religious freedom for his newly conquered people. He encouraged Jews to return to Jerusalem and build the second temple, which earned him the title ‘shepherd of God’ and even the ‘Lord’s anointed’ (Messiah) in the Book of Isaiah.”

“Although the Cylinder was not discovered until 1879, Cyrus’s support for religious tolerance has inspired generations of philosophers, rulers, and statesmen—from ancient Greece to the Renaissance, and from the Founding Fathers to leaders in the modern-day Middle East.”

Another great article about the Cyrus Cylinder going to the US:

Now look at the Anti-Iranian Fascists who rule the IRan today; the are very open and unashamed about their hatred of Iran


For those who dont speake persian - The Mullah: we have to take care that those who care about being Iranian do not come to power (from today news)

How can he say such a thing? He's Iranian himself...

And Remember (Cyrus): being Anti-Iranian and being Anti-Semitic (Anti-Jew) is for Mullahs two sides of the same coin; they use anti-semitism in order for being anti-iranian in practice; thats why their losing in syria is a good thing ...

This is Iran: the song of all songs

Imagine this song in Shomal with bottle of Whisky -- why why (persian) !! ...

Really looking forward to seeing it here in San Francisco this summer.

He is Tazi scum.

Cyrus was hardly Anti-Iranian and Anti-Semitic, quite the opposite. Are you feeling well?

zionists also use anti-semitism as a weapon against anyone who speaks out against their brutal occupation and wars. They are the biggest reason for anti-semitism since 1948.

Does the U.S. itself has anything great to be shown to the world just as this one? I doubt.

No the US hasn't anything like this mat but the US practices the principles mentioned in the ancient tablet.
Something very much lacking in today's Iran under the present rule of the barbaric Islamic Rapist Theocracy.
And that's why you and your chum Pyruz live in the US today and not Iran.
Enjoy being a little hypocrite.

A rule of law rather than rule of the few. No little thing there.
And in a few thousand years, if we last that long, some pictures of foot prints on the moon.