Iran Military Not Present in Syria – Chief of General Staff 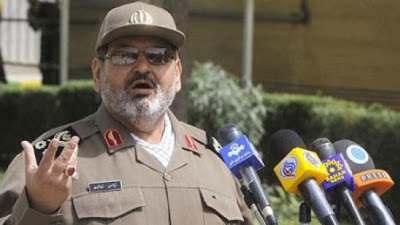 Firouzabadi also said most of rebels in Syria are either "hired or invited" from various Arab countries "to fight under the al-Qaeda flag."

Gen. Firouzabadi did not explain the presence of an Iranian Quds Force general officer in Syria when he was killed in an apparent Israeli air raid, or the presence of Quds Force officers among a group of 48 Iranians taken hostage by the rebel last August, who were later released. Firouzabadi also did not qualify his comments, such as by saying there were no combat troops in Syria. He announced categorically that there was no military presence there.

sure members of the Iranian military, Iranian state-run paramilitary and Iranian govt agents are all over Syria, but there are probably there as sex tourists.

Surly this man is to fat to be Pinocchio ?

Syrian military is doing quite well against the foreign based and US/NATO funded Salafi/Wahabbi terrorist cowards and they surely don't need Iranian troops. Syrian military has shown itself as the best of the Arabs and maintained total unit cohesion. Bravo Syria.

One of the criticisms leveled against the Syrian govt. by IRGC-QF commander Maj. Gen. Suleimani was the initial militarization of the Syrian response to the uprising. The Iranians had apparently advocated a law enforcement approach, the likes of which had been successful in Iran in 2009, Britain in 2011 and the U.S. during the Occupied protests in such places as NYC, Oakland, Denver and San Francisco.

and another thing of interest is what the General said which is skiped by USKOWI here that Syria has a nation that is -'behind it,----a nation whose rights can not be taken away!!' and that Syria is not alone!!.

WITH such solid assurances from the IRAN ,the syrian Rats are in for a nightmare!!.

The subject of this post was the denial of the presence of Iranian military in Syria, made by Iran’s top uniformed officer. Any informed opinion on this subject?

Not for long I'm afraid.

Woe be upon those IRGC and Hezbollah scum if the Syrian people get their hands on them!!

Don't worry two years of NATO/Zionist/Salafi terror against Syria has not buckled the Syrian military, the simple military equation is that the Salafi cowards simply can not "win" as they don't have the manpower unless there is outright foreign intervention, which is not about to happen. It has helped the government to consolidate around strategic towns and leave the terrorist infested rural isolated areas in a state of anarchy as these wahabbi terrorists commit atrocities, rapes and murders that turns people against them. It also helps the government in controlling food and supply distribution to main cities. The Syrian government can fight on for a decade like the Spanish civil-war. The majority of Syrians support the government anyway.

Don't worry it will buckle and collapse soon.
The majority of Syrians don't support the "government".

There are no Iranian soldiers taking part in the combat itself.

I suspect that this is true. A lot of jargon has come out from the opposition, claiming things as wild as 10-15K Iranian troops on the ground in Syria (some even claiming that they are shooting Syrian troops who refuse to fire on civilians), but this is just stupid. Where are the bodies and prisoners? The 48 former IRGC members they captured weren't even armed.

At most, there are probably dozens of military advisers providing aid to Assad and bolstering Syria's security.

How many times does it take to realize the obvious FACT that Syria does not need Iranian or any foreign soldiers. The Syrian army was designed to fight the Zionists and can easily handle a few NATO sponsored Wahabbi terrorists. Syria has well over 400,000 soldiers and militias under arms (500,000 reserves). They have over 4000 tanks and 3000 APC and have recently acquired even more modern and sophisticated equipment including attack helicopters and COIN aircraft. A few thousand illiterate salafi murderers and rapists from Af-Pak and the Arab Maghreb are hardly going to topple President Assad. Even the rational people in Europe realize the dire consequences for Syria and for the regions Christians and minorities if these brainwashed madrassa Salafi freaks ever took over. The FSA has less than a snow flakes chance in hell.

Agreed. Iran probably has advisors assisting the Syrian Arab Army/Military in their Headquarters. There's alot of propaganda, lies and distortions floating around these days. I can remember when the civilian death toll literally jumped from 40,000 to 60,000 in a space of two weeks...and of course the numbers get parroted until the everloving, as one could expect. We would have definitely seen pics & clips of either dead or captured Iranian armed soldiers/volunteers in Syria, if they had actually been there on the front or at the battlefield. Truth of the matter is that there are none to be found.