Obama: Iran More Than A Year Away from Developing Nuclear Weapon 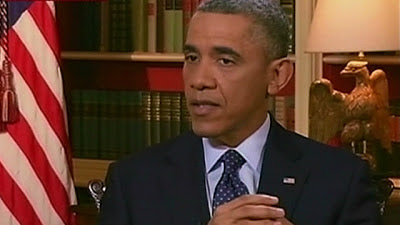 Iran is more than a year away from developing a nuclear weapon, but that does not mean the United States will wait for it to become a reality, President Barack Obama said in an interview that aired Thursday on Israeli Channel 2 TV before a scheduled visit next week to the country.

“Right now, we think that it would take over a year or so for Iran to actually develop a nuclear weapon,” Obama told Channel 2. “But obviously, we don't want to cut it too close. What we are going to do is to continue to engage internationally with Iran.

“I have been crystal clear about my position on Iran possessing a nuclear weapon. That is a red line for us. It is not only something that would be dangerous for Israel. It would be dangerous for the world,” Obama said. ”I've also said there is a window -- not an infinite period time, but a window of time, where we can resolve this diplomatically.” (CNN, 15 March)

President Obama also said he believes that the international economic sanctions, some of the "strongest" ever imposed against Tehran, are having an effect on the country.
"They are not yet at the point, I think, where they've made a fundamental decision to get right with the international community,” the president said. “But I do think they are recognizing that there is a severe cost for them to continue down the path they are on and that there's another door open.”

“If we can resolve it diplomatically, that's a more lasting solution. If not, I continue to keep all options on the table,” the president said.

Photo credit: President Barack Obama during the interview (CNN)
Posted by Nader Uskowi at 7:30 AM

Again, has a new NIE on Iran been submitted? Last time I checked the NIE stated with confidence that Iran didn't possess a nuclear weapons program. So how could they be a year away without even a program?

Really, this isn't a military issue. It's a political issue.

He should have qualified his remark by saying "Right now, if they decide to resurrect their abandoned program, we think that it would take over a year or so for Iran to actually develop a nuclear weapon”. He disingenuously omitted the qualifying bit to keep the pressure on for further concession and reassurance from IRI.

the views of the intelligence agencies of the United States were formally updated in a 2012 report to the president which stated that the theocracy has been steadily working on its nuclear weapons development program, fanboy.

THE PRESIDENT IS WRONG!!

@GOING by the circus and tug of war be/tween the US and the noble NATION of Iran on the issue of nuclear,it is no longer a secret that there are some Nuts and 'political experts' among the US intelligence family who are itching for a war to happen between the US and IRAN!.IT seems that these sharks are frustrated by the somehow positive outcomes coming from the nuclear talks!!.Now IS THE GOOD U.S PRESIDENT A VICTIM of the machinations molded by these mandarins among the intelligence family?.

@IF you say that IRAN is about to assemble a nuclear warhead in a year or later,the world may ask 'did the US president just bump on this story ,or He knew it all along?.

@TO BUILD a nuclear war head is not a welding work in the workshop!, IT DEMANDS A PROGRAM!.is he saying IRAN had the program and that the intelligence reports fed to the world that 'Iran has not deviated' were all false?.

@-this is the correct conclusion which the President should have said -

-"THE NOBLE NATION OF IRAN has in the end acquired the technological know how and capability to build independently a nuclear war head!NOW IT IS UPON THEMSELVES TO decide either to go ahead and acquire one or to stick to the FATWA of their LEADER!!!-"

http://www.youtube.com/watch?v=lR_QDjKQs6o >>> Behind The Scenes Of A Tumultous Relationship

"Obama said in an interview that aired Thursday on Israeli Channel 2 TV before a scheduled visit next week to the country." That line says it all. Just more propaganda for the benefit of the zionist occupation regime. The influence of the zionist lobby in the USA.

Jewish-American citizens in the United States are influential, prosperous, highly educated and have contributed a great deal to the country.

Iranian-American citizens in the United States are also prosperous and highly educated and their contributions to the country will increase as will their influence.

fools, Anon 11:17, claiming that the US is in thrall of a zionist occupation regime, are indeed fools, and usually rancid and ugly bigots as well.

do your shoes fit?

Anon 9:45 PM, is it just a coincidence that Obama said it on ZIONIST TV, BEFORE a scheduled visit next week to the zionist entity?

Is it just a coincidence that in the USA, there exists a major zionist lobby (not jewish) that influences and gets loyalty from, American politicians, even including American presidents? A lobby which American presidents have to appear before and pledge loyalty, allegiance to the zionist occupation regime.

The only "fools" here are those who try to talk about a subject while not knowing about it or just denying truths. If you do not know about the zionist lobby in the USA, that is not my fault. You should open your eyes by educating yourself about it.