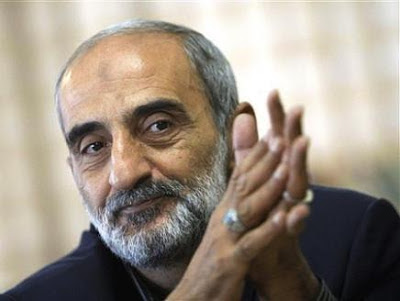 In his speeches, the Iranian President Mahmoud Ahmadinejad has increasingly been using the slogan, Viva Spring! (“Zend-e Bad Bahar!”). Today, Hossein Shariatmadari, the influential editor-in-chief of the Tehran’s conservative daily Kayhan, in a hard-hitting editorial published by the news site Mashreq, questions the use of the slogan and suggests that Ahmadinejad and his political circle are following the footsteps of the Bahais, a religion founded and later persecuted in Iran.

“Now one needs to ask, Why should they (Ahmadinejad, et al.) use the phrase ‘Viva Spring!’ instead of using the holy name of Lord of Time (Imam Mahdi)?  It should be noted that the founder of that decadent Zionist sect (the Bahais) first started using the slogan ‘Baab’ (Gate) and claimed relation with Lord of Time and at the end claimed he himself was the Lord of Time,” wrote Shariatmadari. (Mashreqnews, 11 March)

These conservatives are taking things too far. What's next? Norouz?

In every other country such delusional figures could only have a small weblog where they can project their idiotic conspiracy theories, but in Iran these people actually are in power. Quite scary.

Must enter a beauty competition with Ahmadinnejad :o)

Ahmadinejad has it easy compared with some of the barbs House tea party republicans level at ours.

Mullahs emerging from low life forms can only thrive in dirt (read political conspiracy theories); that is the environment they need to create to sustain their parasitic life form; thats why they fight Art, Rationality and Discussions and every other form of higher culture; thats why they are against Iranian Culture in gerenal which is oriented toward light and renewal (zarathustrian origin); but Mullahs cant see the light - like the blood sucking vampires they are ...

Yeah,and they want to drag us into the dirt with them.Because of these dirty ugly parasites the whole world thinks we look and act like them.They have destroyed the good image and reputation of Iranians.
As you know the light will emerge from behind the clouds and will burn these vampires into oblivion.

Spring is renewal; Shariatmadari and his old geezer's gang are too Old to understand what a revival means.

They tried it once before.

If these people want to be Arabs so badly, why don't they just move to Arabia?

They saw,they conquered,they occupied.
Why should they leave Iran when they have a
ample amount of idiots to still believe in them?
They got a good thing going in Iran.What a party!
As long as people believe in these parasites Iran
will never be free from the tyranny of Islam.
Renounce that "religion" of occupiers then Iran is
90 percent close to freedom because the remaining
10 percent is the easy part.