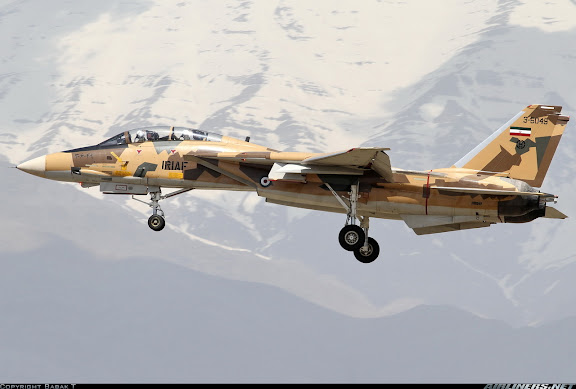 
Below: An F-14A Tomcat aircraft from the United States Navy Fighter Weapons School painted to resemble an Iranian F-14. 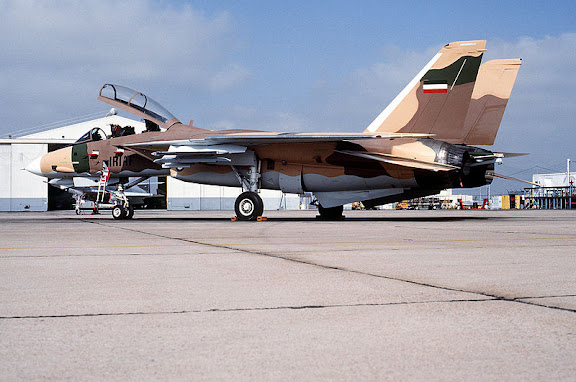 If Iran incorporates this indigenous advanced stealth F-14 with their revolutionary stealth expressway the US Satan and zionist masters will have no chance!

Or in other words: if you equip your 1969 Volkswagen beetle with Rolls&Royce bumpers, you won't still end up with a brand new Rolls&Royce

Is it really true that Ahmadinejad is an F14 TOPGUN pilot and he trains all the other Iranian F14 piolts? How many kills does Ahmadinejad have? Is he already an ace?
My IRIAF friends tell me that Mahmoud likes to watch the Top Gun movie just about every week and pretend that he is Tom Cruise (I hope that this is not true).

LOL, not exactly! F-14 is still a very potent platform and a wildcard.

Really? so IAF (Israel Air Force) must be in deep trouble as their fleet is made of F-15 and F-16 which were originally designed back in 1970's too.

No,they are not "defeatists" just realists.

Yeah sure,but don't forget Israel has nearly 200 F15s and same amount of F16s.How many operational F14s are there under the control of IRIAF,20,30 but no more than 45 F14s that have past their airframe miles by now.
Lets just say IRIAF have all F14s under operation,about 70? They still can't use these planes in intense operational combat due to the small numbers in service and because they are maintenance heavy and require constant overhaul.Therefore long turnover to combat operations.
One US navy carrier has nearly 80 to 90 F18s multiply that by say five carriers and you have 400 to 450 fighter planes which have a short turn over,therefore maintaining long term operations over enemy airspace.

with all respect but isnt better contribute something instead of keep complaining ...
MARK
do you think f-14 even upgrade on have any chance against f-18 or 22 ?
i guess they need to change the way they been using it to protect the sky ...may be AWACS ?what you think

The point of discussion was not comparing the two Air Forces Head to head. The point made was about when the platforms were designed, i.e. Just because its original design was more than 3 decades ago, it does not mean it is not useful. As a matter of fact USAF has plans for the F-15 fleet until 2030's.

These Persian Cats are just a multiplier in any conflict and will not be used as a standalone weapon...

The Iranian F-14s have been used in an AWACS role before, their AWG-9 Radar was one of the most powerful installed in a fighter when they first rolled out of the Grumman plant down in Long Island in the early 1970s, it was capable of tracking and engaging Soviet heavy bombers 100 nmi away. But even upgraded the AWG-9 is a dinosaur; its TWS system ran on a 2MHz Intel 8080 chip, the whole system is a mess of analog circuits.

The aircraft design is a problem as well, it almost predates the concept of stealth. A big radar and two big turbofans would light up hostile Radar/EW systems. There is absolutely nothing anyone could do to make those F-14s stealthy. Anyone who says otherwise is ignorant or a lair. To do so would require a new airframe design to include internal weapons bays (which rules out weapons like the AIM-54, R-72, AIM-7), new construction of airframes, new avionics and probably new engines at which point you are building a new aircraft.

Sorry but the F-14 is a expensive anachronism at this point and the only reason the IRIAF still has them is that they can't get buy anything else, and their aviation industry can't build anything but a couple of F-5 knockoffs.

"There is absolutely nothing anyone could do to make those F-14s stealthy. Anyone who says otherwise is ignorant or a lair."

Well, that's not true. Surely the Iranians can do something to reduce the visibility of the aircraft on radar screens and make it harder and more difficult for the enemy to track, lock on, and hit it. ECM and Jamming pods comes to mind. They may already have aquired such devices from the Russians or Chinese.

In fact it is the opposite of stealth, it's making so much radar noise that no one can use their radar. When aircraft use a jammer it is for very specific tasks such as confusing air defense radars long enough so it can bomb whatever it is protecting or hiding the of launch a bunch of anti-radar missiles before they can react and turn the radars off.

Having a jammer on a interceptor makes little sense, turning it on only alerts the enemy that you are out there. Hostile radar may not be able to lock on to the aircraft but it knows roughly where it is. It is at that stage things get interesting, some weapons like the AIM-120B have what is called "Home on Jam" capability. Which when the missile can no longer acquire the target either with its on-board seeker or though the radar of the launching aircraft it combines its radar picture with the picture it has of the jamming while shifting seeker frequencies and picking out which is its radar return and which is jamming.

Jamming also opens them up for being jammed right back, and a fighter with an external jammer is not going to be able to compete with a dedicated jamming aircraft like the EA-6B. Its like saying "here I am, blind me so you can close in and kill me."

Another problem with jammers is size. Roughly you need a jammer of equal power to jam a radar to be effective, if you don't then the radar can burn though the jamming at longer range (at equal power a radar will burn though at about 5 km). Either you remove a part of the aircraft and install an internal jammer (you will notice a large bump on the spine of some A-4 Skyhawks that is a jammer installed in later productions) or you need to place a jammer on a hardpoint which reduces your payload, actually it might be on several hard points aircraft like the EA-6B carry up to five jamming pods in addition to their internal jammer. Most jamming pods are the size of external fuel tanks, except for some of the Russian self defense jammers which can replace the wingtip missiles on fighters like the Su-27. The other problem with jammers on fighters is that it has to deal with AWACS Radars which are quite a bit more powerful then they are and can burn though at much greater range.

Most aircraft have a self defense jammer which is a very different beast. The range on it is in the 10's of meters against aircraft radar and is only designed to defeat fire and forget radar guided missiles (it supports the expendable missile decoys).

If they did get some from the Russians or Chinese (which I doubt they have lately) it's a good bet the US got some too either from the same companies or from our allies who operate the same systems.

Why are you even discussing this plane being stealthy when nowhere in this story has anyone claimed that these upgrades are meant to make it stealthy in any way? The F-14 was and is an awesome fighter plane and it is a miracle that it is even still flying in Iran, given that the US put all 600 of theirs through industrial shredders, including spares, so that Iran wouldn't get their hands on them through the black market. Why do we have to compare them to stealth aircraft which are designed for a completely different military purpose? I wonder how they would go against Iran's neighbors air forces, if they were not supported by external powers? They probably would still provide some effective air defense against them.

Just by a few pressing of buttons the US could easily end the regimes lifespan.
The US is being nice to the regime.

Most ECM suites equipping fighters, including dedicated long-range interceptor platforms like the F-14 are supposedly set to be activated as an emergency self-protective measure, for example when they get locked by a missile seeker in flight, to attempt to confuse it in order to heighten the chances of successful evasive maneuvers, or at least as a preventive action when a RWR warning lights up in the cockpit while being painted by a hostile search radar in track mode.

Nobody here is talking about making the F-14 a specialized jamming platform such as the Prowler, it would indeed be a joke considering that it wasn't designed for that role in any way and wouldn't ever be able to embark with a significant enough overall jamming power under its wings and belly without losing its core function, as it has been pointed out above.

In short, low-to-medium sized/powered, integrated jammers on a F-14 would specially be useful in the egress phase of an interception, i.e. when bugging out of the enemy's vicinity after having launched its volley AIM-54s at its targets.

In that regard, they indeed have their interest being mounted on this particular fighter in its main traditional task. Plus, one has to remind that if it was one of the unclassified elements of the aircraft that were ripped off on the Iranian export version, it was for a reason.

On a final note, Iranians have claimed recent successes themselves in developing HOJ techniques as well for their ground-to-air missiles such as the Mehrab (SM-1) and the Shahin/Shalamcheh (MIM-23B+), in parallel to ECCM capabilities, notably through the integration of agile frequency hopping for their botht heir ground radar and their missile seekers, so I'm guessing they are well aware of their most probable enemies' capabilities in that regard too, AIM-120B included.

BRAVO to Iran for keeping these beautiful marvels of military technology flying today, despite the oppressive sanctions and misleading propaganda, and regarding the new hard-edge splinter camo scheme, all I can say is WOW!!!