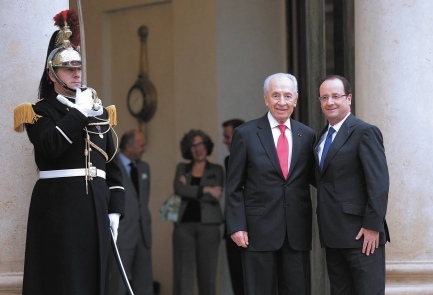 “Sanctions on Iran must to be stepped up,” French President François Hollande told reporters during a joint press conference with Israeli President Shimon Peres in Paris on Friday.
“I have said how much we want the sanctions to be beefed up, which are already efficient,” Hollande said. “But if the Iranian regime continues its efforts to develop nuclear weapons, the international community will have to take it upon itself to prevent it. A nuclear Iran is a threat not only to Israel, but to all of Europe and the entire world.” (Israel Hayom, 10 March)
Peres praised France's determined stance against Iranian nuclear weapons, saying, “The sanctions are more effective than we thought, but not enough.”

In other news -- the two Amigos open up a can of worms...

Hollande having performed for his master, gets a pat on the head and a dog biscuit in return. France is famous for poodles.

Iran. of course, is famous for nuts.

MOST HATED NATION IN EUROPE!

@-In an event of a potential military conflict b/tween the west and IRAN[God forbid] the FIRST SHOT will be fired by France !!.

@-Behind every armed conflict in Africa there is France!-IT is said that in that continent, THEY LOATHE this Country with passion!!.

Iran is not being pushed into wars by (and for the benefit of) foreign powers. Iran's leaders do no stand with a foreign leader over their shoulder, making sure they say whatever is in the interests of that foreign leader. Unlike France.