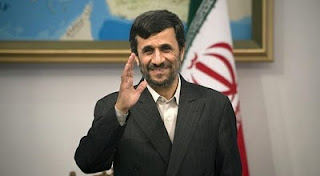 Pakistani President Asif Ali Zardari and Iranian President Mahmoud Ahmadinejad have today inaugurated a long delayed gas pipeline between the two countries. Work on the Iranian side of this new pipeline is nearly complete with the start of the construction of the Pakistani side beginning today.

Referred to as the "peace pipeline" the project has been on the drawing board in one form or another since talks about such a project began in 1994. Initially the Iranians wanted a gas pipeline to India but the Indians pulled out of negotiations in 2009 not long after it went into a nuclear deal with the United States.

The United States is against the project stating it would enable Iran to sell gas which would in turn serve to undermine sanctions which they impose under the pretext of pressuring Iran over its nuclear program. The United States suggests an alternative energy policy to help Pakistan meet its energy requirements. This would envision the importation of gas to that country from Turkmenistan through Afghanistan. A plan that has also been on the drawing board for years now.
Posted by Paul Iddon at 7:04 AM

Jointly ventures by Muslim brotherly Nations is a good ting to behold! Pakistan has much to benefit from IRAN than the US -and time will tell!.

Oh Please forgive us for trying to make economic improvements and God Forbid if it brings prosperity, stability, and less killing.

Once again the criminal mullah regime betrays the Iranian nation. Iran will not benefit from this project. Iran is financing the entire construction while Pakistan is paying nothing. And the regime will sell the gas to them at a low price, meanwhile the Qataris are selling their gas to the World at record prices. Pakistani's should remain living in the dark they don't deserve our gas.

This project is big blow to the sanctions. Wake up and don't let your hatred blind your eyes. In the long run having pipeline to our neighbors will ensure the security and peace since they become more dependent on us and don't dare to beocme our enemies.

Did the ppl. yet benefit from the built part of the pipeline that is built in iran already! So let the mullahs pay their bill for the pipeline and after it we will say the moftkhors will keep the money ( like the saudis and qataris do openly ) ok? But it really will depend the Pakistani regime to iran and that is already a point for iran. when un is calling for sanctions then Pakistan will be on iranian side.

And by the way the pipeline is built (most of it) long ago. I thin of khatami....

What economic improvements?
70% poverty,45% unemployment.
Factory closers due to cheap Chinese imports that only benefit IRGC.
A bankrupt rial.
None of that gas will go into improving peoples lives.
All will be going into corrupt regimes pockets.
Regime helping their "brothers" in Syria,Lebanon etc.
Besides the gas pipeline is easy target for Wahhabi terrorists.

What a short sighted view, So selling gas and exporting it does not help?! Fine, so lets just stop selling everything to any customer, I am sure that would really help.

STOP regurgitating the propaganda, start thinking on your own. Any positive development in any government, Shah or Molla, will help Iran. Politicians will come and go, what matters is how Iran is built for future. If you Let go of the hate, you will see with more clarity.

"Iran is financing the entire construction while Pakistan is paying nothing."

Iran has provided a $500 million dollar LOAN; Pakistan is to pay the other billion. Iran is not financing the entire construction. Gas imports will cost ~$11 per mmbtu, which is a reasonable price. Speaking of Qatar, they (along with America) offered Pakistan cheap gas in order to sway the Pakistanis from inaugurating the IP pipeline.