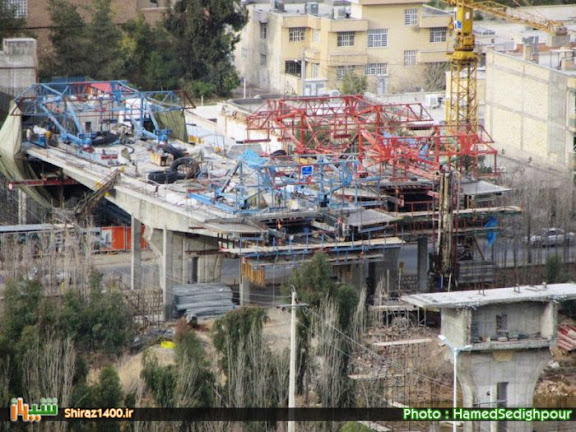 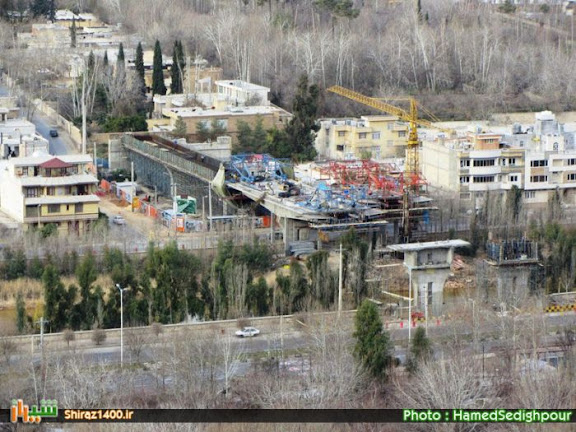 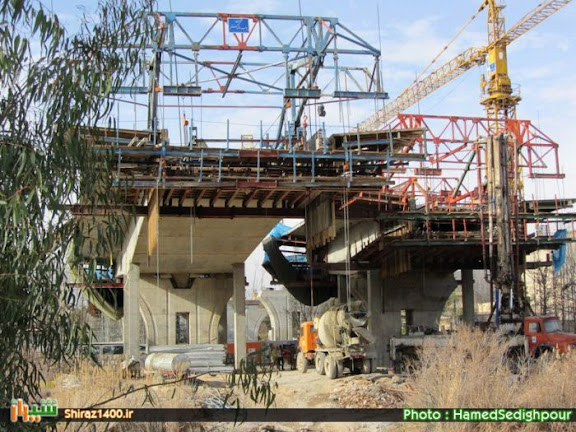 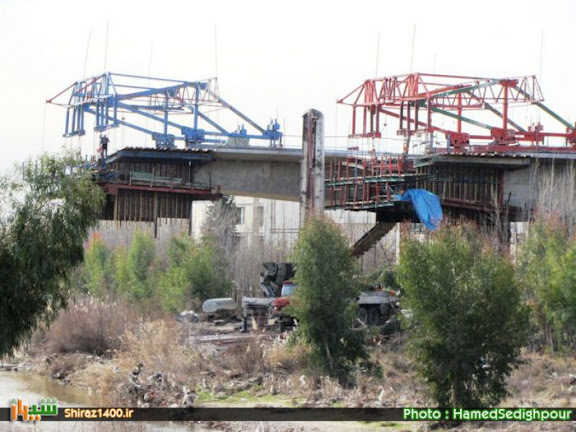 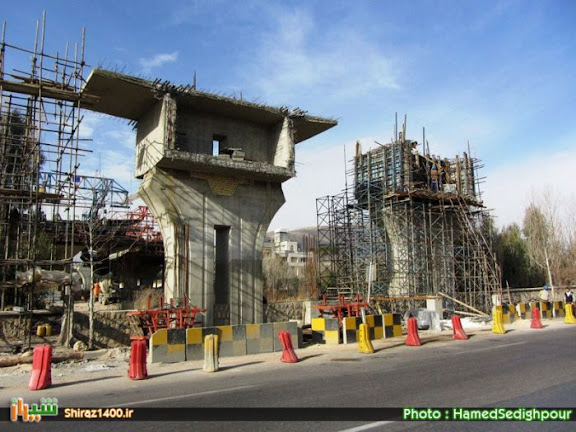 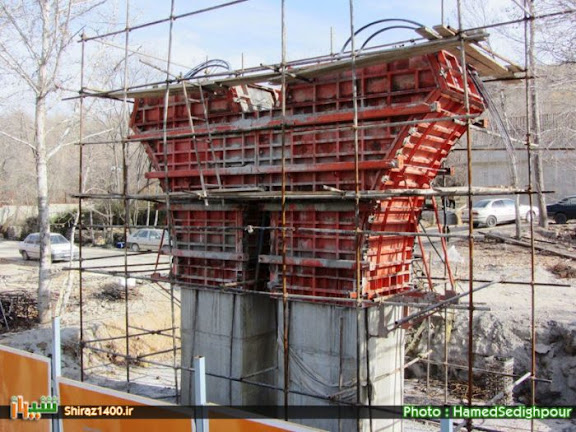 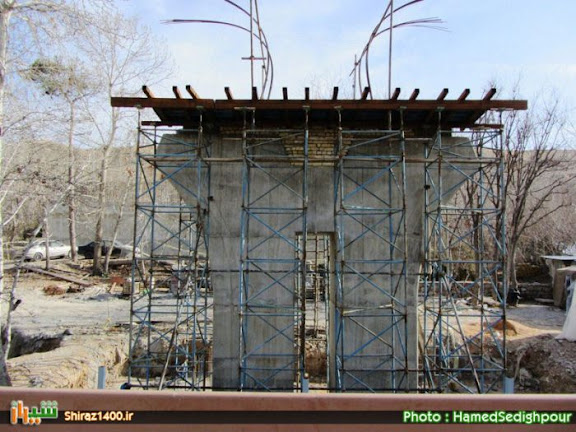 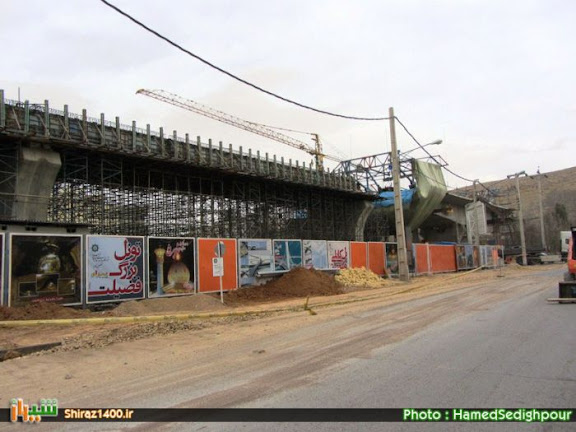 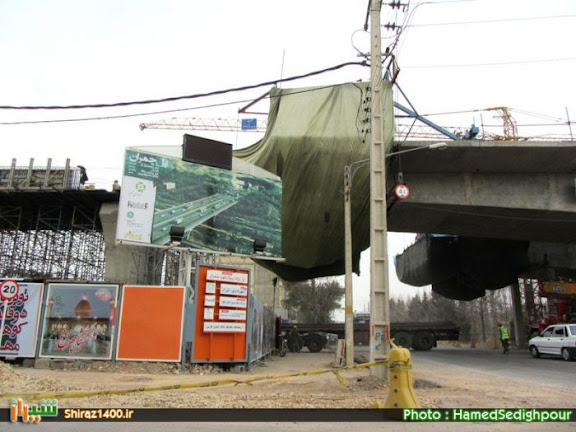 Great pictures and shows the real progress in Iran, thanks to the revolution and dedication of Iranians. Iran now has first world infrastructure and better than most of the deadbeat US and bankrupt Europe. All of this achieved by Iranian experts. Thanks Mark and keep them coming.

But, it ranks near the very top in executions, traffic deaths, and air pollution.

BTW, can USA-residing "enthusiast" of IRI roads, bridges, and potholes even read Persian at an elementary school level? The bottom picture bears the caption "Pol-e Shahid Chamran" ("Martyr" Chamran Bridge, not "Iman Bridge", as the blogger seems to think -- named after the dead Islamist Mostafa Chamran).

Positive pictures, Mark. We appreciate them.

The project is being reported at shiraz1400.ir as "Iman Bridge". I'll check with a resident of Shiraz and hopefully resolve the discrepancy on an update of progress for this project.

O Mark, can you read Persian?

Your ignorance about Iran is amazing. Mostafa Chamran was a dedicated revolutionary who played a leading role in the defence of Iran during the Jange Tahmili. You ignorant anti-Iran fools may be able to read Farsi but know nothing about Iran or its glorious history.

Mostafa Chamran and his two sons were thieves.You know nothing of this charlatan family so be silent.

Without any consultation they decided to build a bridge across peoples gardens.Without any proper planning they have destroyed the once green gardened Shiraz and trying to make it look like one of those horrible soulless Chinese cities.They only do this out of greed and contempt towards historical sites in Iran.

The only real thieves in recent Iranian history were the "Pahlavis" and hence they are living in Washington in appropriate company.

This Islamist who spent his life training likeminded Islamist terrorists in Lebanon and other tinpot states was another thuggish devotee of the Chief Thug Khomeini. As far as this "Jange Tahmili" business, the last 6 years of the war were "imposed" by the Chief Thug Khomeini who refused to end the war in his psychotic quest to "liberate" Karbala and from there to Qods.

BTW, don't think your familiar gibberish about "Jange Tahmili" and "anti-Iran" nonsense coming from someone who can't read Persian at even an elementary school level doesn't make me realize exactly who you are, despite your insistence on commenting on your own blog as "Anonymous" this and other times.

Anon 9:23
One of the mullahs tea boys has stolen more money from Iran than any king in Iranian history combined.Rafsanjani is one of the top 40 richest people in the world.
The Pahlavi's had a total of 84 million dollars from 50 years rule and Ansari their accountant stole that money which left Reza Pahlavi penniless. Khamenei the terrorist leader has about five Billion dollars in UK banks alone.The British government froze his account and that's why they stormed the British embassy in Tehran.So the biggest thieves are your masters the mullahs and their minions.That's why they can pay you to write nonsense.

"The only real thieves in recent Iranian history were the Pahlavis"

I see you have just tried to play that old broken record again :o)
Everybody except for regime minions know by now that the biggest dirtiest thieves and murderers are cultivated under the Islamic turdocracy.

No he can't.He is one of those small regime sponsored foreign jesters.