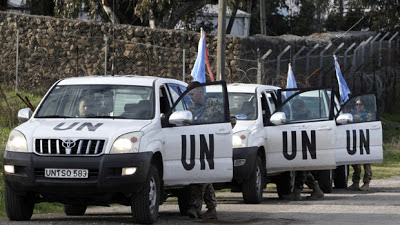 Twenty-one U.N. peacekeepers detained by Syrian rebels this week have been handed over to Jordanian authorities at the border with Syria, the Free Syrian Army told CNN today. Jordan confirmed the release. (CNN, 9 March)
Rebels had detained the Filipino peacekeepers in a Syrian village near the Golan Heights. The United Nations and Filipino government criticized the rebels and demanded their release. The peacekeepers reportedly are unharmed.

File photo: United Nations peacekeepers in the Israeli occupied Golan Heights near where 21 UN peacekeepers were seized by Syrian rebels on Wednesday. (Baz Ratner/Reuters)
Posted by Nader Uskowi at 10:30 AM

BEIRUT — Rebels in southern Syria freed 21 U.N. peacekeepers on Saturday after holding them hostage for four days, driving them to the border with Jordan after accusations from Western officials that the little-known group affiliated with al-Qaida had tarnished the image of those fighting to topple intractable President Bashar Assad.

The abduction and the tortured negotiations that ended it highlight the disorganization of the rebel movement, which has hindered its ability to fight Assad and complicates vows by the U.S. and others to provide assistance. The rebels inability to topple the Syrian government is further hindered by the growing presence of Saudi and Qatari funded Salafi groups whose ultimate goal is Islamist rule in the entire region and the destruction of Israel.

It also has raised concerns about the future of U.N. operations in the area.

Have you heard the latest reports circulating... FSA and the Jihadis are jumping at each others throats... that's wonderful!

The FSA was 90% illiterate Wahabbi freaks from Sahel Africa, Af-pak and some poor brainwashed madrassa idiots bought and paid for by the arch-pimp Saudis and Persian Gulf petro-pimps. They were told that they would topple president Assad in a month and then be given free rein to rape and plunder in Syria. The Persian Gulf corrupt Arab pimps were going to refugee camps in Jordan and Turkey to buy poor Syrian girls as young as eight and sell them in the brothels and cesspools of Dubai and Riyadh. The vile and corrupt nature of Wahabbis simply turned the Syrian population against them. Neither did they realize the toughness and battlefield prowess of the Syrian military, which has yet to call up its 500,000 reserves.

Iraq and Lebanon were not too impressed by FSA terrorists either with their anti-Shia and anti-Christian agenda. The Lebanese and Iraqi armies are now actively killing these Wahabbi FSA scum. The FSA (freaky or fcuked Syrian Army) is really done for, just watch how they unravel as they now can not even decide even on a "leader". BTW, Iraq is deploying 10 brigades on the North Western Syrian frontier and Al-Anbar province. The current Iraqi army is over 90% Shia and is hardly going to let these FSA terrorist criminals run amok. One has to respect and admire the tenacity of President Assad and the brave Syrian military.

THESE are not rebels- THEY are criminals who together with their sponsors deserve to stand trial at the HAGUE!!.