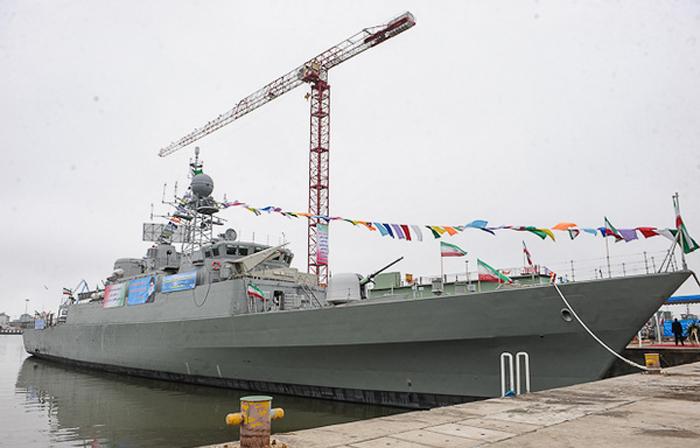 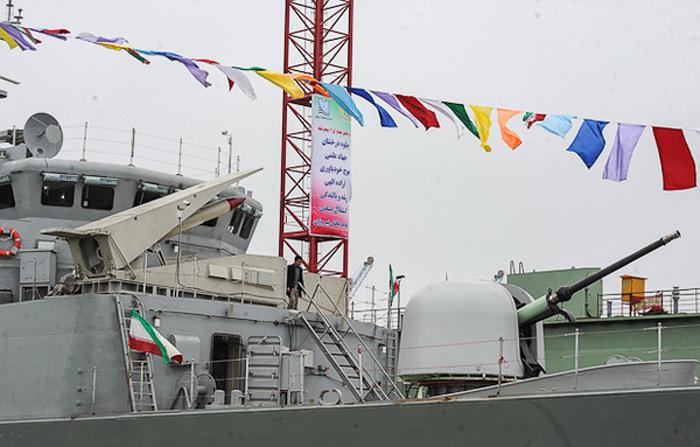 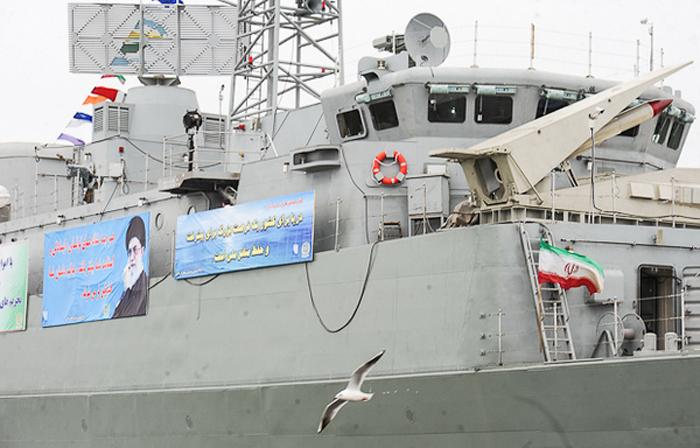 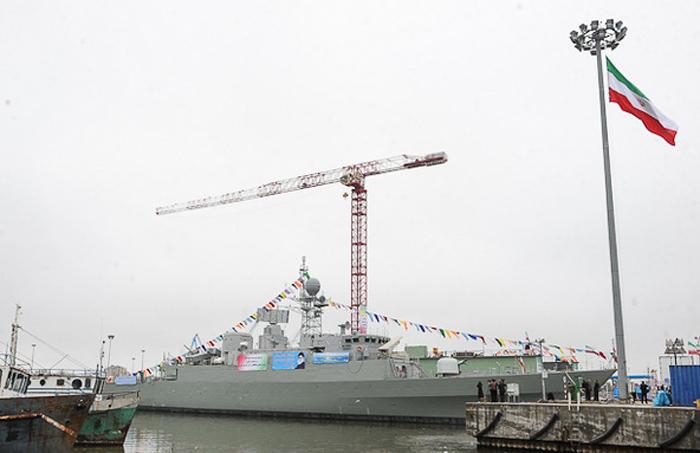 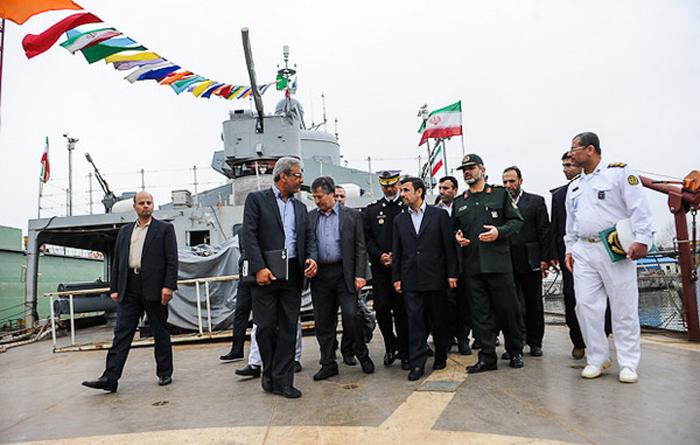 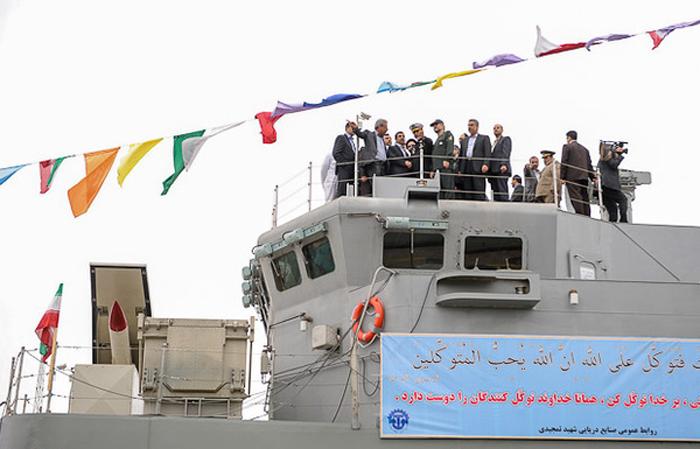 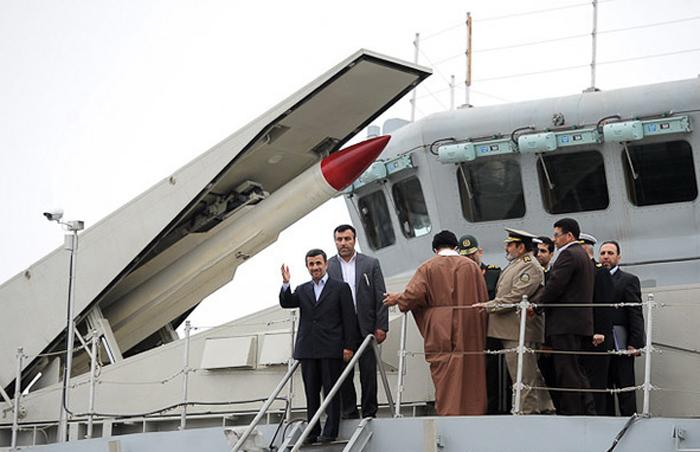 Iranian President Mahmoud Ahmadinejad today presided over the launch ceremony of IRIS Jamaran 2, a new frigate that will be based in the Caspian Sea port of Bandar Anzali. The vessel is the sister ship of IRIS Jamaran (76) that was launched in February 2010 in the Persian Gulf. That frigate has a displacement of approximately 1,420 tons and a top speed of 30 knots with a crew of 120 and is equipped with a stern mounted helipad. The Jamarans are Mowdge-class frigates.

What does that missile do? Is it Anti-aircraft or Anti-ship?

The 1420-ton destroyer is powered by a 20000-horsepower engine with a speed of 30 knots and has the capability to carry helicopters, different surface-to-surface and surface-to-air missile, advanced artilleries, anti-aircraft artillery and torpedo system. It is also equipped with electronic war system.

The Jamaran 2 destroyer is a symbol of the Islamic Republic’s capability and strength and conveys the message of peace and friendship to the Caspian Sea states.

Its a US designed RIM-66 Standard Surface to air missile. These weapons and the single round box launchers were transferred to Iran along with two Allen M. Sumner class destroyers in the late 1970's. Iran also has mounted some of those single box launchers on one of its La Combattante class missile boats.

Iran's navy is becoming bolder just after crossing Sues canal for the first time Iranian naval forces will be sailing the Atlantic Ocean after their successful mission in the Pacific Ocean and crossing the Equator.
Replicas of scan eagle captured about a year ago from the Americans are already patrolling her borders .
and today an encounter in the high seas :
http://www.presstv.ir/detail/2013/03/17/294019/iran-navy-warns-off-australian-plane/
just days after Iranian convoy meets Americans just after Malacca en-route to china.

it has a message to the world ,iran can and will defend its Interests,sanctions or not.

So, this new little bad boy is permanently stuck on the Caspian Sea, without Russian permission to ever leave.

Interestingly enough, it appears to utilize a steerable AESA phased array radar for the antiaircraft role. Only two SM-1 appear on the ship, in a very weird arrangement. My guess is that these are old "boxes" supplied by the U.S in the early 70's, and they are being utilized as a stop-gap measure until something better is available, probably in the near future.

The ASM's do not appear to have been added yet, and the maned rear-40mm is still no CIWS. Two manned 23mm mounts also appear in the rear.

Amendment to my previous post. It appears the ASM armored boxes have been added to the rear of the ship.

In all fairness, I'm not sure the Iranian ship would even fit, or that the Russians would allow it, but I could be wrong.

Unless of course the Iranians plan on attaching wheels to their new ship and driving along the Iranian highway system all the way to the Persian Gulf.

Wouldn't the Iranians have obtained permission for navigating the canal before the decision was taken to launch the Jamaran-2 in the Caspian?

Anyways, now it makes some sense as to the deployment of the Jamaran-2 in the Caspian. Kool, so they could technically reach the Medditerranean. Even though there's no strategical advantage to it...or am i missing something?

This ship might not be significant from a military point of view but is an achievement from an industrial point of view. And since it is operating in Caspian see it gives Iran an important edge in absence western navies.

why not ...are you jealous ....wait to see new submarine ohhhh no wait to see ghaher flight ...no wait to see more advance on nano ,nuclear ,medical,
and its all happening under enormous sanction
now tell me why not

Make ten more of them in five years time, and with improved weapons, and I'll be impressed.

Of course, I am under the impression that is exactly what the GOI intends to do, along with a larger class of ship, and even a hybrid helo carrier at some point. Let's get back to them around 2024, and see what's up.

I doubt it is ever intended to reach the Med...It's a show of force against the U.S and her lackey nation state of Azerbaijan, which last I checked is 100% in bed with Israel. Russia and Iran aren't going to war anytime in given the future. The U.S? But of course.

Now you see why the ship would be useful.

By Russia's info, there is a possibility of the connection between the Caspian Sea and Black Sea for ships, using the channels and the Volga river.

farid......ghaher is nothing but a piece of fiberglass propaganda.
My TV has a better chance of flying than that fiberglass toy!
You are very gullible to believe IRI Bullspit.

Russia and China are helping mullahs to suck Iran's blood.

common lets be honst and leave the politation and system behind
dont you see the progree , iranian scientise , building a destroyer .submarine .satelite , advance medical equipment , we should not make a fun from everything just because we dont like mullahs
even thinking to make fighter aircroft one day was a dream now they built a mock up and i promise they will make one as they did in saeghe and azarakhsh
all i am asking is to be fair

Yeah things were so much better when the usa helped the shah and his cronies to suck irans blood,right!?

The Iranian Navy didn't cross the Suez canal for the first time.It did that well before 1979.