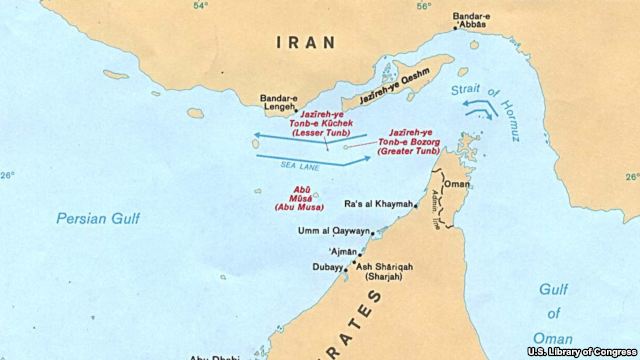 The 24th Arab League Summit released on Tuesday its Doha Declaration, containing strong condemnation of the Iran’s “continued perpetuating of its occupation of the three UAE three islands in violation of the sovereignty of the United Arab Emirates.” (The Gulf News, 27 March)

The UAE has claims on the three islands of Abu Musa and the Greater and Lesser Tunbs in the Persian Gulf. The UAE believes that the 1971 agreement between Britain and Iran to return the Iranian sovereignty to the islands is void. It claims the islands belonged to the former emirates that later united to establish the UAE after the Iranian-British agreement and the new entity was not a signatory to that agreement, even though Sharjah and Ras al-Khaimah had ceded the control of the islands to Iran.

The Iranian government under the Shah signed the agreement with the British and took over the control of the three islands in lieu of its agreement to recognize the independence of Bahrain that it always considered as one of its provinces. In addition, Iran has historic claims to the islands.
If the Iranian-British agreement of 1971 were nullified, then Iran’s acceptance of Bahraini independence would also be voided, requiring a new agreement to decide the fate of Bahrain.

In its statement, the Arab League emphasized its support for peaceful means and measures taken by the UAE to restore its sovereignty over the three islands.

Map: the three islands of Abu Musa and Greater and Lesser Tunbs in the Persian Gulf (VOA)
Posted by Nader Uskowi at 3:30 AM

The Arab league...what a joke that league is. I wonder what the league is going to do next. Military force? Please...

Nothing is going to happen. If nobody cared about iran taking these islands 30 some years ago...what makes the arab league think that anyone is going to care now?

On the other hand, how come the Arab League isn't working just as hard to get the post 1967 occupied land back?

It's arguably the least articulated statement in the entire Doha Declaration document:

Yes sure, we'll give them the three islands when they give us Bahrain back and when Israel gives up the occupied territories.

Sure baby, come and get em.LOL.

Well on a more serious note, according to most independent sources and even according to the gossipy Debka ladies, the Arab league or Arab leak summit of buffoons was a total failure and was mostly anti-Turkey.

The Arab summit in Doha, Qatar (Tuesday-Wednesday, March 26-27), while divided on a whole gamut of issues, has agreed that rapprochement with Turkey is a non-starter.

Saudi King Abdullah and his strategic advisers will on no account follow the course Prime Minister Netanyahu accepted at the end of Obama's visit Friday, March 22, which placed the Syrian issue in the hands of Turkey and Qatar, any more than he tolerated the US-brokered deal for assigning the Gaza Strip to Turkish-Qatari patronage.

On top of his antipathy for the Turkish leader, the Saudi monarch still harbors a deep grudge for the way in the 2011 Libyan war that Qatar’s secret service and special forces took charge with Obama’s blessing of running the Arab support-and-arms pipeline to the various Libyan opposition militias.

The fallout of this policy is manifest from Tripoli to Benghazi to this day. It accounts for the failure of central government to take hold in the face of the vigorous radical Islamic militias rampant in the country – some of which are tied to the Muslim Brotherhood, others to al Qaeda.

The Saudi and Jordanian monarchs are resolved at all costs to prevent a repeat of the Libyan debacle in Syria. In no circumstances will they put up with Muslim Brotherhood and/or al Qaeda rule succeeding Bashar Assad in Damascus.

The deep divisions among the Arab rulers in Doha found absurd expression in their steps on Syria: One was to seat the Syrian opposition leader Mouaz al-Khatib against his will in Bashar Assad’s old chair at the round table. A week earlier, al Khatib resigned as president of the Syrian National Coalition.

These exercises in futility were dictated by two facts:

1. The rift between the Saudi-UAE-Jordan bloc and the Qatar-Turkey bloc persists.

2. This rift is reflected in the deepening frictions among the disparate Syrian rebel groups and serves to aggravate their already towering difficulty in choosing a consensual leader for their cause.
The leadership failure malaise not only afflicts Tripoli, Tunis, Cairo, Sana and Damascus, but the Arab League itself as would-be spokesman for a world region.

The Arabs are so disunited and pathetic that they could not organize a collective piss-up in a Turkish hammam let alone take-on on the armed might of Iran.

The Arabs are so disunited and pathetic that they could not organize a collective piss-up in a Turkish hammam let alone take-on on the armed might of Iran.

I agree completely the arab league has degenerated into a pathetic farce that is irrelevant,what hope is there for the people of the region with "leaders" like this

The Persian Gulf will always stay 'Persia' and anything that is within, closer or in-between the range of the Gulf is ultimately, IRAN's. Well! logically, by looking at the picture of the map above, the location of the two islands of the Greater and Lesser Tunbs seem lie closer to the mainland of IRAN than the U.A.E itself. It is only the island of Abu Musa that lies just right in the middle between the mainland of IRAN and the U.A.E. but instead, by chance, as long as it is still in the enveloped region of the Gulf, IRAN deserves more than the U.A.E does. What poor the U.A.E!

You are correct as well. The problem is that all Arab countries are imperialist creations and are family based corrupt fiefdoms and have kept their populations illiterate, women in misery and have not invested in human development or even rudimentary education or civil society. There is a population implosion in the so-called Arab world with over 100 million young males under the age of 20 and prone to frustrated violence and easy victim to Salafi-Wahabbi cult.

The Arab Spring is mostly a outpouring of economic and social frustration and perverse levels of corruption at government and institutional levels. From Tunisia to Bahrain, the lack of opportunity and the massive corruption by despotic regimes is causing mayhem. The next phase will be mega-bloodshed and destabilization as the unemployed and hopeless Arab youth become more radicalized and turn to armed terror. The obscene corruption by the Saudi and Persian Gulf "royals" and spending on casinos and brothels of Europe does not go unnoticed even though the despots have kept public anger under the rug by lavish subsidies and grants. 90% of Saudi males are unemployed or in make believe "public sector" jobs and same for the Persian Gulf pimpdoms.

Just as a matter of FACT, Iran with mere 82 million people graduates EIGHT times more engineers, doctors and scientists than all of the Arab world combined. Arab access to scientific research, civil society institutions and even global journals is also non-existent. Saudis even failed at setting up a tire manufacturing plant as they had to import foreign labor and European engineers. Same dismal situation in all fields from Doctors to Nurses. The regressive nature of Wahabbism and its retardation of women has a lot to do with it as well. The Arabs face an appalling future and literally gates of hell bloodshed as demographic realities hit home and Egypt and Syrian mess will look like a picnic.

Just as the racist Israelis must free the Palestinians and give back the Arabs their land, the racist Iranians must give back Ahwaz and Abus Musa immediately to the Arabs.

Come and get them if you can. :)))))) What a joke. And don't make a sweeping claim on Arabs. Arabs of the gulf are bunch of US/UK bootlickers while Palestinians fight for emancipation.

Yossarian the US medical cutbacks are causing havoc with your medication and treatment. I am surprised that you still have access to the internet without adult supervision. Quit posting attention seeking crappola.

Yes, we did free Ahwaz, your lookalike and equally crazy Saddam is pushing daises in Tikrit and Iran is the regional boss and is slowly ending Arab colonialism and feudalism indeed. Now triple your medication and rest for a while. All this international news is obviously causing too much excitement and stress on your pea-brain as you have a CAP LOCK now at all levels.

well, it's real slow indeed as Iran is still in the grip of the Arab-imposed religion and the rulers of Iran are slaves to it.

That was ten years ago. Iran has a birth rate of over 2% and population does not stay static. Most estimates are between 80-85 million. The birth rate has increased in the past 3 years as well as the children of the revolution now hit family bearing age in late twenties and thirties.

Where do you get your numbers from? Care to show us your sources?

It appears all over the net: between 75 to 76 million - the population of Iran. Even if you include all the expatriates (the whole diaspora) in your calculation you still won't come close to 80 million.

Why inflate the numbers? What makes you think that a larger population equals better?

Fast population growth creates dilemmas and problems (poverty is just one) that are difficult to resolve...it costs money and requires ever more resources.

And most of the world are now slaves of ... Oops! Christianity was also invented somewhere close to Arabs. What a silly argument.