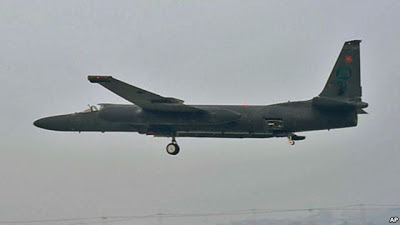 Commander of Iran's Khatam al-Anbiya Air Defense Base Brig. Gen. Farzad Esmaili reported today that his forces repelled an American U-2 reconnaissance plane as it was trying to enter Iran's southern airspace. The incident reportedly happened on 10 February when Iran was celebrating the 34th anniversary of Islamic revolution.
“The U.S. U-2 plane was flying from Pakistan's southwest to the east of the Sea of Oman and was being monitored by our radar and electronic surveillance systems every moment,” Gen. Esmaili said, adding that Iran's Persian Gulf radar gave it a warning when it was trying to enter Iran's airspace above the Sea of Oman and southeast of the Strait of Hormuz. (IRNA/Press TV, 12 March)
File photo: U-2 at low altitude over Korea in 2011 (AP/VOA)
Posted by Nader Uskowi at 7:47 AM

Let see how stealth a U.S.'s aircraft or drone is, once it comes to IRAN's indigenous anti-stealth radar?

If this is true it'll be a quantum leap in Iranian radar technology. It would be interesting to hear US's response to this claim.

that is the AREA THAT MAKES IRAN a fortres that no one dares!!

A fortress where nuclear scientists and missile engineers are being assassinated? Great fortress.

Detecting a U-2 with any basic air search radar is not hard. It is not in any way a "stealth" aircraft. It is also rather slow. It's only savior is it operational altitude, and even that is not a given. Even the most asinine U.S Air Force operations officer knows that Iran has the ability to both track and down a U-2, without too much effort. For this reason, I am calling the story a bluff...If a U-2 was operating in the area, it never had the intent of crossing into Iranian airspace. The potential for platform loss and a rehash of the "Gary Powers" incident would be too great and pointless, with the advent of so many types of affective drones.

Not really. The Soviets have been downing U-2's since 1960. If this were even remotely true, which it is not, I still wouldn't be impressed.

It is not slow the speed is more than 3 mach. learn and then talk

Wow..."Anonymous @ 1:19" is a complete moron! BAHAHAHAAH!!! The U-2 has a MAXIMUM SPEED of a meager 500 miles per hour, and cruises at less than that top speed virtually all of the time. You are so completely uneducated and stupid! I'm guessing you never finished high school! BAHAHAHAHAAH!!!! No wonder the mullah's are on the long way down...The got retarded 7th century monkeys like you giving them military intel reports! BAHAHAAHAHAH!!!!

Anon 1:19 PM......It's the SR71 BLACKBIRD that goes above MACH 3 and that was retired a long time ago.Not even the Russians managed to down the SR71 let alone Iran if the aircraft was still operational.

@ Yossarian: you are a moron to react like that I made an honest mistake since I saw the blackbird in the museum I thought it is the same thing as U2 I am not an expert in military but your reaction is similar to a 6 year old boy.

No, you really are NOT an expert on "the military," Sparky. Now, have yourself a pudding, and go on back to bed...Adults are talking.

Comander Mansoor from the Air Defense Forces has assured me that today we have also shot down the US devils XB37 spy craft, soon the rest of the world will hear and see how great Iran is, now we have check-mated the zionists completly. They no longer have the weapons to spy on us.

not to long ago Iran put out a story that they downed an enemy drone during their military exercises. we all know how untrue that story turned out to be.

let's wait before believing this one.

here is a picture of the XB37 that Commander Manowar shot down.

According to a recent comment of the IRI General Staff, Commander Mansoor is extremely short sighted and has produced a number of spectacular ground to air kills in the recent past: - Santa Claus plus reindeers and sleigh (twice in 2012), - the hidden Imam in his final approach to Ahmagdinejads home(three times), - 2 Space Shuttles, - 28 domestic flights and about 2,500 different types of larger birds.

He also shot down the Battlestar Galactica, the jerk.

And here is the deadly weapon he used...

and no telling how many of those birds pooped on his head.

Here is the latest imagery: the mean immortal Persian killermachine Mansoor getting ready for combat against sheitan-e bozorg: