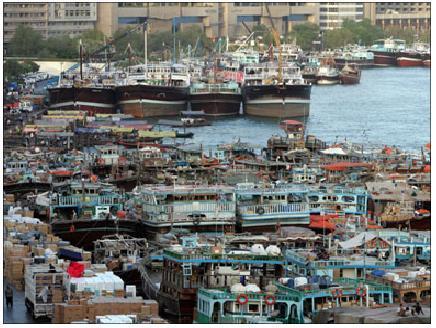 Ahmed said that for decades, Dubai has been a major commercial hub for Iran, which brought most of its imports through the emirate. The sanctions, however, have forced Dubai banks to reduce Iran-related transactions.

This is a no-brainer as the puppet petro-kingdoms of the Persian Gulf are no longer important to Iran as its trading partners are now mainly on continental Asia, namely China, India and the Central Asian stans. Dubai is an artificial US,UK-Zionist controlled non-productive artificial economy built on shifting sands and cheap glass skyscrapers built by abused and enslaved South Asian labour. Iran should be cutting all economic ties with these puny sheiks whose house of cards will crumble soon anyway as the "Arab Spring" and its puppeteers move in soon.

On the subject of a shift Eastward of the economies in the world, this is a historic macro-economic trend and it cannot explain the differential in Dubai-Iran trade in the past year.

And what would be your analysis if the volume of trade with Dubai increases in 2014? Then they are no longer puppets? Or it would show Iran’s strength? That’s the problem you face with these kinds of “analysis.”

That trade is now steered from Dubai, towards China, Iraq and India. Undoubtably, there are business entities in Dubai that are unhappy with this. But Dubai, like pre-'79 Iran, does not enjoy full sovereignty where it concerns foreign policy. And this is the result: down 31 percent.

Well said as usual Mark, and common sense that these Persian Gulf Arab puppets are paper-weights and more than 90% of their population is western expat losers who could not make it in deadbeat Europe and US and the rest is slave South Asian labour. The hollow economies of these Persian Gulf pimps is totally artificial as the western expats rip them off and then sell inflated weaponry and consumer goods with nothing value added. Iran was in similar situation before the revolution indeed. These puppets have ZERO manufacturing or intellectual economy ( and I am using the world rather loosely)so there is nothing to gain from trading with them. Iran can now by-pass the ineffectual "sanctions" by many ingenious routes. BTW, trade with Europe is increasing as well according to Bank Markazi (Central Bank) and The Deutsche Bundesbank.

Oh yeah Nader Joon, everything is sloganeering for your emminence unless one is bad mouthing Iran. Harkat, Harkat Hezbollah Rahbar, Rahbar Rohollah (now this is a heart catching slogan LOL).

The question remains, Did they these countries became paperweight puppets just last year, or are we now saying that because the trade volume has plunged by 31%? What happens if trade volume picks up dramatically when sanctions are lifted? Do these countries become heavyweight pro-Iran independent entities? The trade is cut by 31% because of the sanctions, and nothing more, and will go up by more than that when the sanctions are lifted. You are trying to make a political/historical observation out of a simple cause and effect relationship due to sanctions.

Bravo! I hope and I am sure the Iranian officials base their trade policies with UAE and other Persian Gulf countries on the needs of Iranian economy and not political "analysis" that has nothing to do with the current volume of trade with Dubai. Sanctions have caused the plunge in trade, the end to sanctions will increase the volume to new record highs. Sorry, it's that simple!

Nader Khan, I don't think trade with these puny pups is going to increase much as we live is a different world today and those of us who live in the real world outside of deadbeat US know full well the changing shifts in world trade patterns. The BRICS summit in South Africa is the harbinger of things to come as over $200 billion worth of trade, education and scientific agreements were signed. BTW, the biggest summit on earth with 3 billion people and world's top economies was totally ignored by the US/Zionist ostrich media. Talk up having their heads up the proverbial.

In case of Iran's trade with the Khaleeji pimps, it was a matter of mutual convenience when Iran was rather inexperienced in beating the sanctions. Also there are over half a million Iranians, particularly very astute businessmen living in the pimpdoms. Today is a different story altogether as Iran is on more solid footing and has excellent relations with all its key neighbours, particularly India and China. You should cover the Indo-Iran Chahbahar transit agreement that will be signed soon. I earnestly believe that one should be unbiased and appreciate the great progress Iran has made in regional and global context. Only losers are its enemies who are missing out of so many opportunities with such a great industrious nation with an equally illustrious 3000 year old history. Most Europeans understand this and have paid lukewarm attention to the Zionist cabal that is trying to impose illusionary "sanctions" against a nation of 82 million people sitting on top of major global energy resources. The whole market and consumer base of the UAE pups and Saudi pimps combined is smaller than that of greater Tehran region. In any case sanctions lifted or not, Iran will prosper and thrive. It is too big and smart not to.

This post and the discussion that followed was not about the benefits of trade with Dubai. The post was a straight forward reporting that the volume of trade with Dubai has plunged by 31% in 2012, due to sanctions. A number of pro-government commentators then started saying that it is a good thing not to deal with Dubai, and the trend in today's world is to increase the trade with Asia. It seemed to me these were attempts to explain away the effect of sanctions on Iranian economy.

I am not saying that China is not growing fast and Iran cannot benefit from increasing trade with China and Asia. But two points: the cut in trade volume with Dubai has nothing to do with China. Dubai re-exporters to Iran, a large number of them Iranian citizens and companies (not the "pimps" as described by ignorant commentators here), are cutting the transactions not because Iran does not need their goods, but because the banks in Dubai are giving then hard time to execute transactions because of sanctions.

On China, the Eastward trend in global economy is a historic, slow-moving trend at macro-economic level, which does not and cannot explain the lowering volume of Iran's trade with Dubai. By the way, Iran's export volume to Asia and china is also down, and precisely because of the sanctions. This is not a time for hallucination, serious changes in economic leadership of Iran is needed.

I think what some of the commentators were saying is that the reduction in dubai trade was no big loss and may even be a blessing in disguise as iran is forced to find other partners who are not as politically unreliable as the arab puppet states,in addition the sanctions seem to be having a diminishing impact as iran and other countries find ways around them or iran begins to produce locally what was once imported,like car part for example.The biggest losers in all this were the europeans who have thrown away decades of trading relationships and tens of billions of dollars in trade and energy at a time when they very badly needed both,thats the problem with being a puppet state you have to put your masters wishes above your own best interests