‘Best Time for Resolving Disputes with the West’ – Iran FM 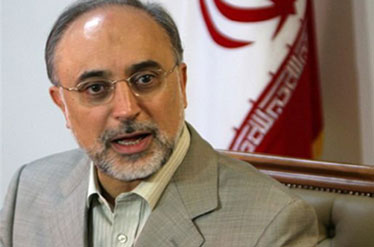 “I have some information that I prefer not to talk about, but it shows that sanctions on Iran would be gradually eased in next solar year,” Salehi said (Mehr News Agency, 10 March). Iran's new solar year will start on 20 March.

“And if we want to choose a time to resolve the disputes, this is the best time,” Salehi added.

The next round of talks between Iran and P5+1 is scheduled to be held in Kazakhstan next month (‘Almaty II’).  Before that, the two sides agreed to hold technical talks at expert level in Istanbul on 17-18 March.

The Iranian position has improved due to the events in the North Korea domain.
Now the West has to deal with three major problems that include Syria, DPRK and the Islamic Republic.

Urgency of the Iranian problems has faded to the third place, and Syria with the DPRK created kind of "bulletproof vest" for the Islamic Republic, because the West theoretically have to "militarilly" deal with them first.
In addition the West, in its interest will have to wait on the outcome of the Iranian election.

All those events improved position and have given "better hand" for the Islamic Republic in the prospective negotiations, however the Supreme Leader's determination and judgment is binding for all Islamic Republic's representatives, including Mr. Salehi, who knowing the international situation well, tries to encourage the West to further concessions, with his "sweet" words.

The views and statements of Mr. S. Jalili - Supreme Leader's envoy to the nuclear issue negotiations, express precisely the Leader's position on those issues...

“Sweet” words are not to count for much at Almaty II. To get an agreement, both sides need to compromise and go for a win-win situation, notwithstanding what Khamenei likes or doesn’t like. Iran can certainly opt out of any agreement with the West, but sweet talks won’t get it anywhere.

How do you think US can compromise? As far as I know, congress passed a lot of sanctions and is not willing to remove them. Obama simply can't remove sanctions even if he reach any sort of agreement. The only thing that comes to mind is that US give green light to Europe and Asians to ignore the sanctions and do business with Iran but this will discredit US for the future and will heat the fight between WH and congress. Moreover, European seems even more hawkish (at least some of them like France). Personally I am not hopeful also it seems both sides are under tremendous pressure to compromise, the path seems so unclear and difficult.

Sanctions can be removed in the same way that were put in place originally. It might take a bit of time, but they could be removed if there would be an agreement.

No they can't. US sanctions are set by congress. Congress apparently do not accept any sort of compromise that accept Iran's enrichment and Iran will not stop enrichment at any cost ...

What do you mean "they" can't? Whoever put in the sanction, can take them out, and that includes the U.S. Congress.

i disagree with your analysis. But let's cross the bridge when we reach it; let's have a compromise struck at Almaty II and then worry about the Congress. That's my least of worries.