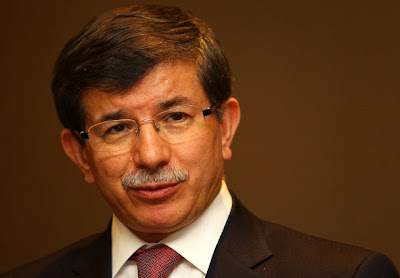 Turkish Foreign Minister Ahmet Davutoglu said in televised remarks on Thursday that Israel's apology to Turkey for the 2010 raid on a Turkish aid ship has nothing to do with the conflict in Syria or Iran.
“There is no causal link between the Israeli apology and Turkey's Syria or Iran policies,” Davutoglu said. “Israel has been subjected to serious diplomatic pressure in every field. Israel saw that its room to maneuver had been restricted with regards to its bids for membership in some international organizations.” (Today’s Zaman, 29 March)
Davutoglu was probably referring to Turkish previous objections to Israel's participation in NATO activities as part of a Mediterranean partnership program. Israel is not a NATO member but is a member of Mediterranean Dialogue, a NATO outreach program, along with six other non-NATO countries.

Israeli Prime Minister Benjamin Netanyahu phoned Turkish Prime Minister Recep Tayyip Erdogan last week to offer an apology in a surprise move that came as a result of President Obama’s personal mediation, who joined the phone conversation that resulted in resumption of full relations between Israel and Turkey.
Netanyahu had said that concern over Syria's chemical weapons ending up in the hands of militant groups bordering Israel and Turkey had prompted the apology. “The fact that the crisis in Syria intensifies from moment to moment was the main consideration in my view,” the Israeli premier wrote on his Facebook page, insisting that Israel and Turkey need to communicate with each other on the Syrian crisis.
File photo: Turkish Foreign Minister Ahmet Davutoglu (WorldBulletin/News Desk)
Posted by Nader Uskowi at 7:00 AM

Turkey is in a mess regionally as the the pathetic Arab League meeting of imbeciles clearly showed that the usual backstabbing Arabs are now ganging-up on the Turkish puppets as well. The recent human rights abuses of Syrians in Turkish "refugee" (terrorist training) camps and yesterdays mass deportation of Syrians is part of the problems staring down the Turks. Barely a hundred years ago, the decaying Osmani empire fell victim to the British inspired "Arab Revolt" (Major T.E. Lawrence fame), and now there are shades of "Arab Spring" biting the moronic AKP and the buffoon Erdogan. History is repeating itself for the Turks.

And their biggest mistake was in Syria. An abyss they don't know how to get out of now that al-Assad is not falling as easily as they hoped for.

Turkey which lies just right in the middle between the East of the Middle East and the West of Europe is just like a two-headed poisonous snake with two different kinds of brains in its head and can't even think properly and positively when it comes to choosing especially in a matter of right and wrong. It's hard to believe the turkish leaders with that kind of stuff, indeed.

The leader of Turkey’s main opposition party Kemal Kilicdaroglu says that Ankara has shot itself in the foot with its hostile anti-Syria policy.

During a speech in the southern city of Adana, the leader of the Republican People’s Party (CHP) condemned Prime Minister Recep Tayyip Erdogan’s stance towards Damascus.

Kilicdaroglu accused Erdogan of siding with Saudi Arabia and Qatar against the Syrian government of Bashar al-Assad.

He said that the Turkish government’s stance towards Syria is not in line with his country’s national interests, but instead serves that of the US, Germany, and France.

How is the weather on your planet? LOL.

Lol!!!! Well, maybe he thinks the Middle East is comprised of Turkey and Cyprus. That way Turkey would be the most powerful. :))))