"Going to Tehran" or Not! 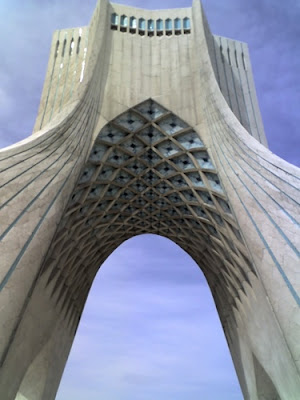 Here a few excerpts from her review:


"There is much to be said for understanding how the Islamic Republic of Iran sees itself on the international stage. We make little sense of history, and less progress toward resolving our conflicts, when we demonize our adversary and ascribe to him dark motives and irrational thoughts. Flynt and Hillary Mann Leverett, veterans of the State Department and the National Security Council, might have written a book that made a powerful case for empathy in foreign policy. They would have devoted much of it to illuminating Iran’s strategic interests and its view of history. They might have done so while observing, as they have elsewhere, that American policy must not be blinded by sentimentality about Iranian human rights and democratic aspirations — concerns, they could suggest, that have no place in the cold calculus of global strategy. Whatever we think of the Islamic Republic, the Leveretts might argue, it is the policy maker’s job to understand it as it is, not as he would like it to be."

"They [the authors] accept the perspective of the Iranian government with regard to both its foreign policy and its internal affairs. Rather than delivering a corrective to the one-sided view from Washington, they deliver its mirror image."

"They assert (without evidence) that virtually all the Iranians who took to the streets in 2009 came from one rich, irrelevant area of Tehran. As for the young woman, Neda Agha Soltan, whose death by sniper fire was captured on a video seen around the world, the Leveretts give credence to the government line that she was actually shot by provocateurs in a deliberate effort to frame the Iranian security forces and fan rebellion."

"If the Leveretts were urging caution in assessing the true desires of a bitterly divided population whose opinions cannot be credibly studied on a large scale, it would be a point well taken. But that is not the Leveretts’ agenda. Rather, they purport to know how the Iranian people think. And it turns out that they think exactly like their government."

"On the basis of opinion polls taken under repressive conditions, the Leveretts write that most Iranians support their government’s crackdown on protesters after the 2009 election. They claim that Iranians overwhelmingly believe in the divine right of the clerics to rule, and happily accept the conservative clerics’ role in choosing the candidates who can stand for elections. As evidence of popular satisfaction with the political process, the Leveretts cite official election turnout statistics, including those from last year’s parliamentary election, which the state-controlled news media published the day before the vote. At one point the Leveretts cite, and quote at length, a personal e-mail from an unnamed 'defender of the system' explaining what 'the overwhelming majority of Iranians believe.' "

"The concluding pages of “Going to Tehran”argue that American policy makers cannot resolve their impasse with Iran’s government so long as they imagine they can isolate it, strangle it, bombard it, dislodge it or simply wait for it to fall. Rather, a visionary American administration should take the Islamic Republic seriously as a strategic partner and negotiate a comprehensive agreement covering all outstanding issues between the two nations."

"The Leveretts compare such a diplomatic enterprise with President Richard Nixon’s opening to China. They suggest that outreach would start with assurances that the United States will not seek to invade or topple the Islamic Republic; that Iran can enrich uranium on its own soil, but with international safeguards; and that the Arab-Israeli peace process will include the Iranians and take account of Iranian interests. The Leveretts are less clear on what they would require of the Iranians in exchange, other than 'a reciprocal Iranian commitment to resolve — or, where resolution is not possible, to manage — outstanding bilateral differences through diplomacy and negotiation.' "

“Going to Tehran” is too one-sided to illuminate much about the history of relations between the United States and Iran. For that, readers would be well advised to pick up 'Becoming Enemies,' a fascinating collection of declassified documents and expert and participant commentary from the time of the Iran-Iraq war, co-authored by six scholars."

"Its authors have bound a value judgment about the Islamic Republic to their own foreign policy prescription, which is for diplomatic engagement, and so they presume that their critics do likewise, marrying a critical perspective on the Islamic Republic’s domestic behavior to a call for war. In the end the Leveretts furnish a potent reminder — and example — of how political agendas have distorted our views of Iran and deepened our estrangement."

What Iran ultimately needs ist the Vatikan model for Clergy in Ghom; the Shia Clergy can have its own state in Ghom, its own Velayat Faghi: what ever they want; but they should let the rest of the country alone; that is the solution and you dont need analyze anything else ...

Iran has two identities: Nowroz and Ashura; only through the vatikan model those two identities can be reconciled; but now Iran is at war with itself ...

The first step to any future in Iran is democratic transition then the people and their representatives can decide how to balance the religious traditions with the need to separate religion from government (to protect religion from the influence of the state and vice versa).

Jabbar, it's fine to point to an article but you can at least add a personal perspective to it, such as what you agree with and possibly disagree with, or in some cases add a distinguishing photo or two that sheds better light on the topic.

Personally, as an American, I've seen this sort of debate before, during the 60s and early 70s, where it concerned China. The Chinese-Americans that had been here for decades and were not expatriates from the Chinese revolution looked upon the expatriates as stark raving fanatics, ashamed of their own country. And the expatriates used to point to every anti-PRC piece they could come across, to the largely unaffected Chinese-Americans many of whom had family that had lived in the U.S. for nearly a century.

I thought about writing a post on this subject but I figured it would be received in way too emotional a manner, and that's really the heart of the matter where it concerns expatriates and the country of their origin.

I can tell you this: the anti-China Chinese I knew back then that were so against U.S. rapprochement with the PRC back in the early 70s are today quite comfortable with China these days, with renewed business and social ties back in the old country.

We've seen the same with Vietnamese expatriates; the ones that settled in the Tenderloin region of San Francisco.

I'm confident that when rapprochement does take place between the U.S. and Islamic Republic, Iranian expatriates will also find the same mellowing of anti-Iran attitude plus opportunities the likes of which they'd never imagined.

You see, Jabbar, I've seen it more than once before as an American with a partial heritage of continuos settlement on this continent that stretches back in time as far as the last ice age.

I could argue that it's no worse than posting photos of commercial constructions in Iran as a sign of progress without offering any background information whatsoever.

But the real reason is that the article speaks for itself, so if you don't like what you read I invite you to offer arguments specific to the points being made by the NYT book review.

As far as my motivations for trying to expose the regime you admire, I will leave that discussion for a different time so that we can focus on your response to the actual points of the article itself and not "me".

Since they love the "culture" of Arabia the mullahs and their minions should pack up their gear and all go to Karbalah and establish their Vatican there.

The problem won't go away with the change in regime.As long as these parasites are among us they will try and subjugate and influence events in our country, just like the past 1400 years.
After the downfall of the regime there will be social revolution in the country with the exclusion of the clergy and the Sharia laws as well as clerical defrocking and deportations to Iraq Syria and Lebanon.

@Pyruz....Then as an American stick to what you know best,America!
And leave Iran to Iranians to sort out without your fictional yarns and Leverett's usual Bull Crap Pie.

These people shouldn't even be on the soil of Iran!

I can't wait for that day !

Several points highlighted in this post were ones I also made in my review of the Leverett's work just after it was published.