Vessel Operator Pulls Out of Iran 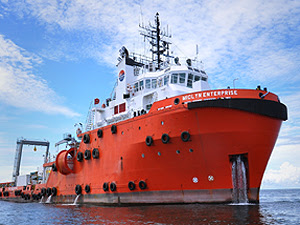 Miclyn Express Offshore (MEO), a leading provider of service vessels to the offshore oil and gas industry, announced today that it has withdrawn its final three vessels and crew from Iranian waters. MEO cited the expanding international sanctions against Iran as the reason for its withdrawal. (Offshore, 4 January)

File photo: An MEO vessel (miclynexpressoffshore.com)
Posted by Nader Uskowi at 8:30 AM

so what ?
That can be done bei IRISL without any problem.
That is no hi tech

Thanks for this great news!!!

WHY THIS SIGHT ALWAYS SAYS NEGATIVE OR POST NEGATIVE NEWS ABOUT IRAN????????.IRAN IS FIGHTING THE HEGEMONIC POWERS IN LAST 60 YEARS SPECIALLY IN LAST 33 YEARS, THE LEAST YOU CAN DO,STOP POSTING UNIMPORTANT SUBJECT AND SAY SOME THING ENCOURAGING,THERE ARE MORE GOOD NEWS ARE HAPPENING IN IRAN TODAY THAN ANY OTHER TIME IN HISTORY OF THAT COUNTRY.

hey, are Ahmedinejad's advisors still imprisoned? weren't some of them released when they promised not to consort with evil spirits (other than Khomeini's)?

isn't that the sort of good news worth reporting?

Interesting that you believe Iran has been fighting the “hegemon” in the last 60 years. I always thought the Islamic Revolution happened because the government of the day was too close to the “hegemons.”

ONE- it is true we are being fed a lot of things from the GOVERNMENT PROPAGANDA MACHINE !BUT WE CAN ASSUME, ALL THAT MESS IS A RESULT OF the state being alien to the norms of democracy .AND ANY DEMOCRATIC BLOG OR FORUM [clamoring for change] WORTHY ITS NAME CANT FOLLOW THE FOOT STEPS OF THE UNDEMOCRATIC REGIME-so how come this blog is perfecting the art of one sided coverage ,highlighting on petty negative things while ignoring and closing its eyes completely on some very positive things undertaken by the REGIME?.

TWO-it wrong to assume that 'the Iranian propaganda machine does not like this blogs like this!!..'-WE ALL THOUGHT THAT YOU ARE STRUGLNG TO TALK TO THE PEOPLE ,because it we People who can hold the Government accountable and make choices for change,YOU ARE FAILING IN YOUR JOURNALISTIC DUTY IN PROPAGATING UNBIASED NEWS IF YOU ARE STRUGGLING TO ANSWER KEYHAN,PRESS TV ,IRNA,ETC AND it sad to see our blog resorting to undemocratic tactics to put the regime in bad light!

YOU MISSED THE POINT TOTALLY.YES IRANIANS ARE FIGHTING U.S HEGEMONIC /DOMINATIONS FOR 60 YEARS IN IRAN.1953 OUR NEW AND YOUNG DEMOCRACY WAS TOPPLED BY CIA.THEY BROUGHT "SHAH" AND OUR PEOPLE HAVE TO DEAL WITH THAT CORRUPT AND INCOMPETENT REGIME FOR 27 YEARS .EVEN THOUGH I LIKED SHAH,BECAUSE HE WAS AN IRANIAN AND HE LOVED IRAN, I ONLY RESPECT HIM FOR THAT PART,BUT HE WAS A PUPPET AND PEOPLE. AROUND HIM WERE CORRUPT TO THE CORE. IRAN WAS CLIENT STATE TO (U.S) DURING HIS TIME.I SAW THE CORRUPTIONS AND LACK OF LEADER SHIP BY HIM FIRST HAND.NO BODY CAN TELL ME WHAT HAPPENED, I LIVED THE HISTORY DURING THAT PERIOD. IM DON'T CARE WHAT WEB SIGHT YOU REFERRING TO.BUT THE TRUTH IS TRUTH , LONG LIVE IRAN AND THOSE WHO LOVE THIS GREAT NATION AND THEIR HEART IS BEATING FOR IRAN EVERY SECOND.