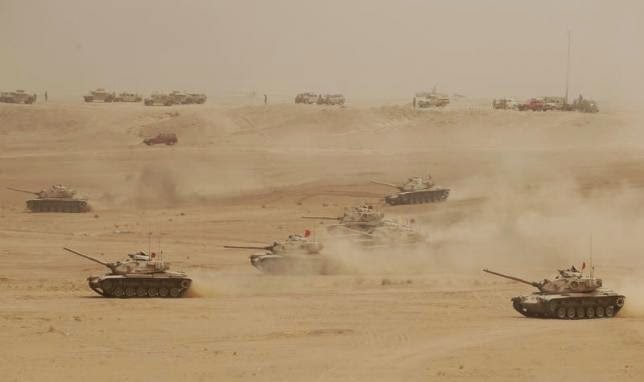 On a video distributed by Reuters, Saudi military transporters are seen hauling main battle tanks late Saturday in the Saudi town of Jazan, 20 miles away from the Yemeni border. There are increasing sign of an impending ground incursion by the Saudi-led coalition into Yemen. The Saudis have said that if troops go in, they won’t leave until “they have degraded the Huthis’ ability to do battle,” CNN reported. But the Huthis are apt guerrilla fighters and any ground war could prove to be bloody and lengthy.

Saudi-led coalition airstrikes have hit Yemeni air defenses, which are under AnsarAllah (Huthi) control, attempting to establish near total air superiority over Yemeni airspace. But on Saturday the Huthis said they had shot down a Sudanese fighter jet and captured the pilot. The strikes have also crumbled key infrastructure that links major towns with the capital, Sanaa, a Saudi official said today. Army weapon caches, military facilities and commercial and military airports have been hit. Saudi naval special forces have also rescued dozens of diplomats trapped in Sanaa, the Saudi official said. (CNN, 29 March)

Saudi Brig. Gen. Hasan Asiri, the military spokesman for the coalition, said in a statement on Saturday evening that the airstrikes have destroyed Yemen's entire fleet of fighter jets. Rebels are "no longer in possession of a jet fighter," Asiri said. (Washington Post, 29 March)

Saudi-led coalition includes militaries of the Kingdom as well as the UAE, Kuwait, Qatar, Bahrain, Egypt, Jordan, Morocco and Sudan.

This whole campaign reminds of the 2006 Israeli-Lebanese (Hezbollah) war.

Zero chance of any ground invasion. The Saudis and their mercenaries are not about to die for a lost cause.

surely you don't think that the Saudis are going to worry about civilian casualties the way that the Israelis do.

Their's no reason to suppose they wouldn't. Saudi Arabia is quit a stable country. People are relatively happy and rich, and the only thing keeping them from speaking out against their tyrannical regime is the relative prosperity and security it provides them with.

The last thing they would want to cope with is suicide bombs and rockets!

Oh because the Israelis actually proved time and again how much they cared about civ-cas every time they bombed the hell out of an Arab country and/or people, never used banned weapons and always make discriminate, surgical, clean strikes. Likewise, no UN resolution ever condemned them for collective punishment and deliberate use of force on civilian areas, nor did any NGO demonstrate their willingness to destroy civilian infrastructure or highly concentrated population centers devoid of any military value during their various, regular bombing campaigns, would it be in Gaza or Lebanon. That was the joke of the week. Such models of conduct they are indeed. Saudis, hope you watched and learned, only kill a few thousands Yemeni civilians for a few hundred militiamen for the days to come, include 500 children and some playing on a soccer field live in front of world cameras if possible, but no more, otherwise it would be a crime.

Very good analysis, they know they have no chance against the asymmetric Yemeni warfare...one RPG and the Saudi tank is in smoke...they will never go into Yemen beyond border incursions.

The same goes with the Egyptians... they use to overestimate their abilities...especially when it comes to wars:
http://en.wikipedia.org/wiki/North_Yemen_Civil_War

The Saudi air campaign will continue but it will kill civilians and anger the Arab masses and prepare them for all kinds of assaults against Saudi and all those who have actively participated in the bombings such as UAE, Qatar and Kuwait etc.

it's not a lost cause. the Houthis will be defeated and the government restored.

Yeminis will not be defeated...maybe if Pakistan and Turkey are called in side by side the Egyptians...otherwise Saudi and Egypt will fail due to lack of competency.