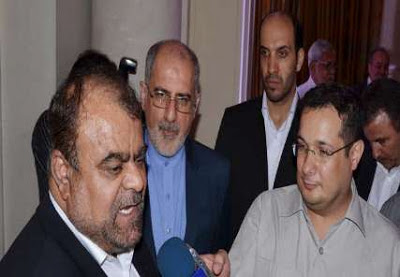 Iranian Oil Minister Rostam Qasemi headed a high-ranking delegation to New Delhi to persuade the Indians to increase their imports, cut to 13.3 million tons in 2012-13 from 18 million tons in the previous year. This year the imports are expected to further fall to around 11 million tons, with Mangalore Refinery and Petrochemicals Ltd (MRPL), the country’s largest importers of Iranian crude not purchasing any so far this fiscal year that began on 21 March. (Deccan Herald, 28 May)

Iran would be better off offering lucrative deals to pakistan to further wean it away from us/saudi influence,or to china,india has shown itself to be an unreliable partner and is not to be trusted,iran should only offer india something like this if there are big economic or political payoffs to be had in return otherwise what does iran gain?,if the indians dont want irans oil then let them buy it somewhere else

The begging and pleading and giving the Iranian oil and gas for free has started.

Exactly. Tehran is near to "buying revenue", in business world, this often presages corporate restructuring, or bankruptcy. The Iranian people have an election soon, although the candidates have been pre vetted for them by Guardian Council aligned...

Few weeks on a post related to “diversification” of Iran’s oil industry, I commented that as soon as the sanctions are lifted the Iranian government will go back to its old days of selling as much crude as it can and use puts the revenues in its general budget. A number of commentators, mostly staunch supporters of Iranian official policies, not matter what and in what context, attacked this blogger of negativity and said Iran was on its way to diversify its oil industry, and called the sanctions miracle in disguise.

Well, the sanctions are not yet lifted, but in the first opportunity believing they might be able to lure India back, and might is the operating word here, the government is ready to by-pass Pakistan, construct an undersea pipeline, offer an entire oil field, and sweetened deals, and doing all that to sell more crude to India. No further comments!

Please read the opening sentence as: Few Weeks ago...

I seriously doubt anyone here has used the term "miracle in disguise",sanctions are a hardship but they are also an opportunity if iran goes about it the right way.Iran has shown it can do this sort of thing before when the west targeted irans gasoline imports,iran responded by decreasing the demand at home and increasing refining capacity eventually becoming a gasoline exporter,now if thats not a silver lining then I dont know what is.Grovelling to the indians or anyone else for that matter is stupid,iran should insist on fixed long term contracts for its oil:so many years,so many barrels,price per barrel and severe penalties for reneging on a contract.

That is not possible in the current international climate caused by the actions of IRI in their foreign polic.
Do you think the Indians , South Koreans , Japanese etc... will give up their so much more importatnt relationship with the US and the EU for the sake of the IRI ?

Anon at 5:20AM
I second with you that India is not a reliable partner and behaves not as a future trustworthy superpower of the world.

Their (India) pretenses for a permanent UN Security Council seat and the "veto" vote's right, has yet to be earned, and so far India's majority concerns focus on making "easy" profits from other countries' vulnerabilities and sufferings...

The Zionist entity eyes India as their future servant..., therefore Islamic Republic needs to take those issues into the shaping of its long lasting relationship with India..