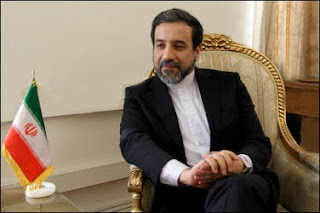 Iran’s Foreign Ministry Spokesman Abbas Araqchi on Wednesday denied published reports that Iranian military forces are operating in Syria. Araqchi said that the report by the Washington Post was meant to “justify and cover up” the decision made by European Union to lift ban on dispatch of arms to the Syrian rebels. (Fars News Agency, 29 May)

As usual US/Zionist losers barking since their terrorist mutts got their butts kicked by the brave Syrian military and Hezbollah LIONS. Even if Iranian troops are in Syria so what? and what are these pathetic scumbags going do about it? LOL.

Are you saying that Iran’s foreign ministry spokesman was lying? That Iran does have forces in Syria? BTW, the designation ‘LOL’ does not soften the thuggish language used. LOL!

It's good to know that the Islamic terrorist regime has placed its eggs into the hopeless Assad basket.

If any iranian military forces are in syria it would be in an advisory or specialist roles backing up the saa and Hezbollah forces,the other possibility would be small numbers of special forces volunteers who would be gaining combat experience

AnonymousMay 30, 2013 at 5:12 PM
How exactly is assad hopeless when he has far more fire power than the jihadis and has gone over to the offensive and scored a considerable victory at qusayr,the only hope the jihadis ever had was foreign intervention like in libya and that was never going to happen,the whole thing was an act of desperation and madness by the arab puppets to try and weaken irans growing power,well guess what it failed and hopefully iran and syria will give the puppets a taste of their own medicine,payback is a bitch

As the western instigated Syrian Salafi terrorist comes to an end, Iranian senior leaders once again stressed that they will simply not let President Assad fall.

Iran’s deputy foreign minister for Arab and African affairs says the Islamic Republic will not allow the overthrow of the Syrian government.

Hossein Amir-Abdollahian made the remarks on the sidelines of the Friends of Syria Conference in the Iranian capital, Tehran, on Wednesday. The international event was attended by representatives from around 40 countries with the aim of contributing to a political solution to the foreign-sponsored crisis in the Arab country.

“We will not allow the Syrian government to be overthrown. We strongly support the Syrian nation and government as well as the opposition that believes in a political resolution,” he added.


Amir-Abdollahian added that Iran will utilize its experiences in the region to prevent the collapse of the Syrian government.

We will see who will "watch and learn" boy!