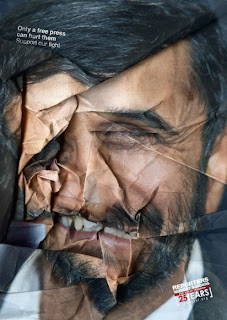 “The upcoming elections in Iran, no matter what the outcome, are a net profit for Tehran. A new president, a new beginning, an international agreement that the leadership that 'has been elected' should be given a chance… Iranians present themselves in a new light and make it difficult for Israel to push its agenda to thwart the Iranian nuke at all costs. I can't believe I'm writing this, but we're still going to miss him. Strategically, of course.”

"make it difficult for Israel to push its agenda to thwart the Iranian nuke at all costs.", indeed. The truth slipped out from zionists, which is that all the talk of a so-called "nuclear weapon" in Iran, is just an excuse, a cover for their own own agenda/ulterior motives.

It doesn't matter which idiot installed as puppet for mullahcracy,because they all smell the same as the smelly mullahs.

The most sovereign state of IRAN is the sole NATION in the whole region of the Middle East that is free and stands up straightly, directly and bravely from the world's Zionist warmongers of the U.S., its life-term master, Israel, and the West's total influences and dominations across the globe. The rest are the U.S.'s Zionist remote-controlled cowardly puppets in the name of the U.S.-made Allies, apparently. Syria is another example of a free nation's. What smart nation leaders of IRAN!

Wow mat,what poetry! Now go and prove to me you're a man of your words and go and live in of the free nation's of the world,namely Syria. LOL!