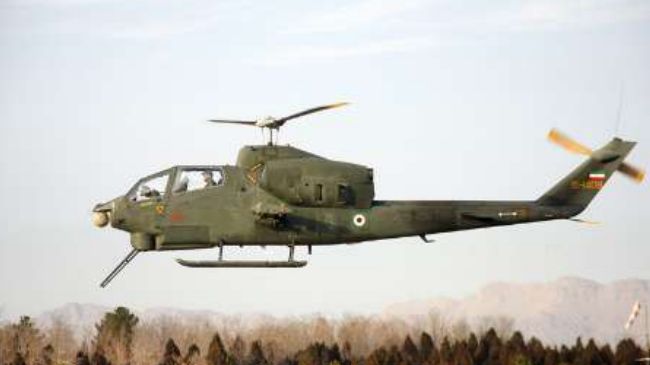 Iran unveiled an upgraded version of its Toofan (“Storm”) attack helicopter, named Toofan 2, in a ceremony on Wednesday. The Toofan helicopters are based on the Bell AH-1J Sea Cobra. The first ten of the Toofans went into service in May 2010.

Gen. Vahidi added that the aircraft will “dramatically boost the combat power of the Iranian armed forces once its mass production begins.” Vahidi gave no exact date when the new chopper will enter the service.

The aircraft is built by the Iranian Aviation Industries Organization (IAIO).

It is an upgraded AH-1J Cobra with new Avionic systems including communications and navigation and domestically produced weapons systems. The airframe has also seen a redesign and is narrower, armor plated protection for the pilot with what looks like kevlar plates on side cockpit window sills (more rectangular canopy, see pictures of Vahidi inside the cockpit at IRNA site), a targeting camera in the rotor assembly and bullet proof glass with narrower IAIO patent canopy, similar to the IRGC black painted Toufan 1 Cobras. Crew protection against ground fire has been enhanced. There are now eight ATGM (various versions) launch racks and twin 50mm rocket pods and a 20mm vulcan rotary cannon in nose with helmet sighting auto targeting. Big improvement over the old IRIAA Cobra. All the Avionics and Sensors are new and Iranian made.

The Toufan 2 is now a totally domestically upgraded Cobra developed by the Iranian Aviation Industries Organization (IAIO). The main difference from the version already in service is the Electro Optical Surveillance and Tracking System that is believed to use FLIR (Forward Looking Infra Red) technology, visible electro-optical imagery, as well as laser designation and illumination to provide target identification, ranging and tracking capability.

Iran has had a very good experience with Cobras and over 202 were delivered prior to the 1979 revolution and about 50 were lost in the jange tahmili. Now with new deliveries, over 150 of these machines are in service with IRIAA (Havanirooz) and Sepah rotary aviation units. Even though the design is over 30 years old, many western militaries including USMC, Zionists (ill-kempt rabble killing civilians in Gaza and also known as IDF), and the Turkish military all operate the battle proven Cobra. The AH-1W is the backbone of the United States Marine Corps's attack helicopter fleet, and has been replaced in service by the Bell AH-1Z Viper upgrade.

Iranian upgrades will keep this reliable helicopter in service for another couple of decades or so. Three generations of Iranian rotary aviators have mastered this chopper by now.

These two variant helicopters are evolving modified types put out by the Iranian military industrial complex. The fact that airframes such as these are being evolved and not put into serial production or serial upgrade says a lot of Iran's military industrial complex and IRIG public relations priorities, as weapons systems such as these aren't central to Iran's defense posture based on deterrence. Weapon systems that are central to deterrence are given more serious and consistent allocations of resources.

When I see the tinkering going in to these old Cobra (and Tiger II) airframes, I just think this has a lot more to do with PR than any serious attempt at upgrading their tactical capabilities. It also says a lot about Iran's lack of access to current model type weapons systems, and the realistic disdain they may have for inferior Russian and Chinese types which would present little more than targets against American military capabilities.

I agree. Iran has almost nil access to modern weapons systems and these prototypes are mostly jerryrigged versions of old Cobras. However, I think that Russian KA-25 or KA50/52 Hokum attack choppers are as good as any western counterpart. Iran really needs to get serious about its strategic weapons procurement plans. Russia and North Korea are the only possible alternatives as the Chinese are totally unreliable and subservient to the US due to economic dependency. The mullahs have mismanaged foreign policy to an artform. Iran is the only large nation, perhaps in the world without a professional diplomatic service or foreign service training academy. Most of the so-called diplomats are friends or family of the mullahs and hence the pathetic condition of Iranian diplomatic or militay alliances. In the rapidly changing global geo-strategic conditions Iran really needs to ge its act together in both creating a viable professional foreign service as well as strategic intelligence capabilities to improve relations with other powers. Feeding the media and the domestic population baloney will only give the whole nation a severe heartburn.

Hope you realize that Iran is under an arms embargo and there is no chance for the country to procure the weapons required.
And as long as the mullahs are running the roost the country will remain in a state of despair.
The only thing these people are professional at is lying,stealing locking people up for protesting against oppression,raping,torturing and killing.
And by the way,I have already heartburn from their never ending nonsense.