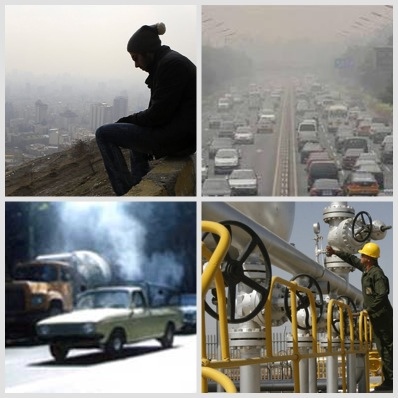 The BBC reported on Saturday that Mr. Hasan Aghajani, advisor to the health minister, had told an Iranian TV station that 4460 Iranians had died as a result of air pollution in the past year (1).

Last Wednesday, schools and government buildings were shut down to avoid exposing the public to toxic levels of air pollution and to reduce traffic in many iranian cities, including: Tehran, Isfahan, and Ghom. Tehran was shut down again this past saturday under similar circumstances.

More than 22 million Iranians live in polluted cities and are subject to increased health risks resulting from air pollution (1).

Last year the Iranian government decided to use petrochemical plants to produce petrol to overcome the lack of sufficient refining capacity to meet the national need for gasoline. As this pollution crises intensifies there is no sign that the Government is willing to concede that the new synthetic petrol is to blame for the pollution, and move to limit its use in large population centers. As far as the regime is concerned, the new petrol is safe, if not safer than what Iran used to import.

Like many Islamic republic lies, the lie about the safety of petrol is covered by layers and layers of lies that it is now near impossible for the government to admit mistakes and take corrective action. There is one admission buried in ISNA 2011 archives that the iranian petrol is made to Euro 2 quality, and not current standards (5). Good luck finding any recent honest discussion by Iranian officials on the subject.

The other question that this issue raises is whether or not the Iranian government knew of the health risks to the population when it decided to more ahead with a hasty plan to replace imported gasoline with its own synthetic (instead of refined) petrol.

It wouldn't be a stretch to imagine that they knew the risks to the general population but chose to make this particular "human" sacrifice to keep their political and nuclear  ambitions alive.

Khomeini faced a similar choice years ago when he had to choose between ending the Iran-Iraq war, or keep  sending  thousands of Iranian youths in futile "human wave" attacks to achieve the unattainable goal of punishing Sadam for attacking Iran .

Khamenei, like Khomeini before him, is pursuing unattainable goals of his own (nuclear and military) at the cost of physical and financial suffering of the Iranian people. The Kayhan editor recently wrote that "some" want the leader, Khamenei, to drink the «جام زهر» "poison" on the nuclear issue (2), referring to Khomeini's decision to end the war with Sadam in 1988, which he compared to drinking poison (3,4).

In both cases the question is not when the supreme leader is forced to drink the poison, but rather how long the "leader" is willing to tolerate the suffering of his people, or in this case, their slow poisoning by air pollution, before he relents and gives up on failed policies.

If history continues to repeat itself in Iran then we are bound to see Khamenei pushing the country to the edge of total disaster before he decides to drink his «جام زهر».

Jabbar Fazeli MD,as you well know the clerical fascist theocracy was established on a foundation of lies by Mr Khomeini,when he said that water and electricity will be free there will be free bus rides and so on.
When the founder of this movement lies what do you expect from his minions?
If that man didn't lie half the nation wouldn't have bothered coming out of their homes to support his blatant lies.It's because of Khomeini's lies that the situation in Iran is what it is today.
And when the theocracy of zealots hangs people off of cranes in public and executes dozens a day,what's a few thousand more being poisoned to death?
I'm afraid this regime won't leave Iran alone until it has taken its last drop of blood and left it in a state of economic and moral ruins.

I RUSHED ON to the article knowing that you had quoted IRANIAN MEDIA only to get a rude shock on seeing the three letters B,B and C!!.

Yes B.M.A the BBC,the very same organization that helped Khomeini into power by allowing him to spread his propaganda nonsense into our beloved Iran.

@BMA 2:58
Are you saying the information is NOT TRUE?

-THE REGIME IS ON THE RIGHT TRUCK and history will prove them so!!.-

I have read your article very carefully ,it is a nice piece but as usual you have ruined it by your incurable ailment of emotional ranting!BUT J.F,once again have you played the witness,the prosecutor and the JURY all in one [thereby being unjust to Regime] and once more you are exposed!-AND here is a quick run on your emotional article!

@IT is the BBC that repoeted ,MR ASGHANI,ADVISOR to the healsth minister had told an Iranian tv that 4460 Iranans had died as a result of air polltion in the past one year!.
@ many Iranians live in polluted cities thus exposing them to health risks and the government only effort s to order a closure of government buildings.
@the Government is in fact killing people deliberately by allowing use of synthetic petrol that is produced inside the country[the main culprit].
@ the government is a common lair by cheating that THE synthetic petrol is safer and better
@but the Government knows well the dangers of the new petrol but KAMENEI LIKE KHOMEINI wants to sacrifice the population to satisfy his ego before he drinks the chalice!

since when did the BBC become an honest source f news from a 'hostile Nation' .may be you have introduced the BBC here to give weight to your argument but unknown to you the BBC IS A WAR MONGERING ENTITY and a source of blatant lies and state propaganda!here are 4 examples
-BBC and Gaddafi-THE British cooperation rallied the whole world into believing that Gaddafi was a reformed terrorist,this was immediately after He renounced the procession of weapons of mass destruction.GADDAFI was thus welcomed into the world stage sharing podiums with all.BUT when the blood thirsty leaders of the west wanted him eliminated,BBC changed tune and introduced GADDAFI as a an oppressor and a tyrant RULER.it then continued to sing this song till GADDAFI was killed in cold blood.
BBC and MANDELA-did the bbc tell the world that Mandela was jailed unjustly ,and organize discussion and lambast the white apartheid rule? it issued truths in half doses,only to glorify MANDELA DURING HIS RELEASE as a lifelong freedom fighter!
BBC and the IRAN /IRAQ war-as a global news giver BBC HAD THE DUTY TO GIVE INSIGHTS AND details on every happenings in the war,but it did not tell the world on the support SADDAM was receiving from HIS FELLOW ARABS AND THE US.and who supplied SADDAM WITH POISON? .DURING ALL these years BBC did not tell us that Saddam was a tyrant and dictator, BUT WHEN HE THREATENED the interest of the west by invading KUWAIT,BBC was the first to point a finger of Saddam calling him all NAMES!
-bbc AND Saudi Arabia-AN under age girl has recently been married to an old man of 90! in what in becoming increasing Saudi excesses in women rights violations.BUT YOU never SEE BBC SAYING that this ARAB NATION IS A VIOLATOR OF HUMAN RIGHTS from the BBC!

your claim that the government is scarifying people is nothing but hot air,MIND YOU J.F ,development has to start somewhere and any development is accompanied with sacrifices .TODAY TEHRAN IS CHOKING WITH SMOKE BUT IT WONT BE THE SAME SOME YEARS TO COME,many remedial measures are being formulated ad in the long run IRAN WILL BE TECHNOLOGICALLY INDEPENDENT AND SAFE.

OBJECTION THREE-you have an axe to grind with the clerical system yet you do not offer a convincing alternative only to bombard your readers with lies from the regime! ARE YOU SERIOUS THAT THE MILLIONS OF EDUCATED IRANIANS ARE BEING CHEATED DAILY LIKE KIDS and have no intelligence to see the truth? surely JF YOU HAVE A BIG MOUTH and i believe you are not a journalist!!.

I am firmly convinced B.M.A,that you are working for the regime as a full time cyber Mozdor.:)

@BMA 1:07
So you thinks its "true" but sacrificing these Iranian lives is worth it for the greater good?

Since you took the time to write a response that is longer than the article itself, I will reward you with a response to the other nonsensical points you were making.
I also would like to point out that in civilized cyber society constant capitalization equals "yelling", just FYI.

I agree with you, I'm not a journalist. I do have a day job and don't need another. I am,however, an activist and a blogger. Having said that, I do try to give exact dates, names, as well as links to my source of information so that the readers can judge for themselves if they believe what they read. I also do it because the cyber basij have a nasty habit of arguing the obvious to justify what the Islamic republic is doing to the Iranian people.

You should know that the Iranian regime has not issued a denial of the BBC report. I guess they left it up to you. Again, feel free to deny it on the Islamic republic behalf. All you have to say that the title of this article is "not true" or as you would put it "NOT TRUE".

Finally, most here would agree that the BBC holds itself to a higher standard of truth telling than the IR so called media. I don't think I should have to defend the BBC's journalistic integrity, especially when the criticism is coming from a supporter of "FARS NEWS".

Anon 5:18, despite my strong negative feelings for the Iranian, I found myself compelled to say that your conviction that they have employed this person to be an insult to the regime.

Hi! I know this could be off topic but it's still relevant.
Look up YouTube and type in:

Hojatoleslam Hossein Ansarian:What will happen to supporters If the regime is changed!

This only lasts for a few minutes but the message is significant because the cleric was one of Khomeini's closest friends and warns the audience of the destiny of the supporters of the theocracy,if it's overthrown.