U.S. Would Not Accept a ‘Bad Deal’ with Iran 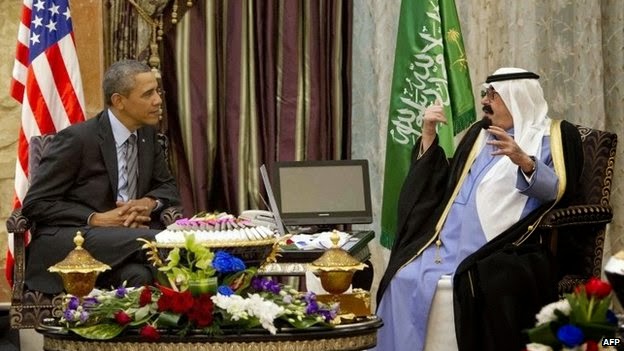 U.S. officials said after the two-hour meeting at Rawdat Khuraim, a royal desert retreat northeast of Riyadh, that the president had made it very clear that the two countries' strategic interests remained “very much aligned,” BBC reported tonight. The White House also hailed the “strong relationship” the U.S. enjoyed with the Kingdom.

A U.S. official also told BBC that President Obama told the king he would not accept a “bad deal” on Iran. That’s understood to mean that the Americans will not cut a final agreement with Iran without stringent guarantees that Iran will not, and could not, pursue a nuclear weapons program

I remember when that hideous and mentally thwarted monkey Ahmadinejad would kiss arab and Saudi asses thinking they would be his ally, then Corporal Manning released those documents to Wikileaks showing that the arab countries despise Iran -- and he was shown for the fool he was. At least it's all out in the open now.

I remember once the King Abull said, I will negiotiate with anybody except with Ahmadi nejad

the government of Saudi Arabia is every bit as vile as that of Iran.

both should disappear from existence.

The hard hitting truth on fundamentalism within Shia islam. The system of debauchery called Mut'ah (prostitution) and payment called Khums to Ayatollahs (corruption) and the ceremony of self-harming in the name of Hussein.

You probably mean as vile as that of Israel ! (We forgive your confusion)

Saudi Arabia, is to be divided in 3 countries, now sooner or later !!!!

1, areas with mainly Shia inhabitants (with most of the Oil Reserves in it)
2, The holy places under a central (international) administrative management
3, and a Wahabi land where they can lock up their women and breed their kind for all eternity.

Interesting that the commentators on this post missed/ignored the topic of the post entirely, namely Obama's saying that he would not accept a "bad deal" with Iran during the ongoing nuclear negotiations, and instead solely commented on Saudi Arabia and the nature of its regime. Sorry guys that we cannot cover Saudi Arabia the way you desire, but good news is that there are good blogs available in English on the country.