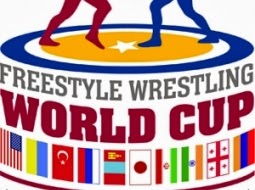 Team Iran won the gold in 2014 Freestyle Wrestling World Cup in Los Angeles by beating Russia in the final with the score of 6-2. Reza Yazdani, wrestling at 97 Kg against Russia’s Yuri Belonouskiy, clinched the gold for Iran in a memorable and powerful performance.

The Iranian-Americans filled the Forum in Los Angeles, the site of this year’s world cup, and cheered Team Iran loudly and non-stop during the matches.

Here are the results of the eight matches:

Reza Yazdani showed once again that he is arguably the best freestyle wrestler in the entire world.

Impressive win by Iran, some of the matches were not even close!

I just stumbled upon your blog and wanted to say that I have really enjoyed reading your blog posts. Any way I'll be subscribing to your feed and I hope you post again soon.A fantastic presentation. Very open and informative.You have beautifully presented your thought in this blog post. Freestyle Wrestling