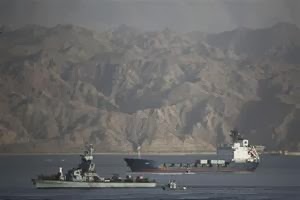 Klos C, the cargo ship intercepted by Israel in the Red Sea on Wednesday, reached the Israeli port of Eilat today under escort of Israeli warships. IDF announced today, after its second inspection of the vessel, that the ship was carrying 40 160-km-range rockets.

Klos C was berthed in the Iranian port of Bandar Abbas and Iraqi port of Umm Qasr before sailing toward Port Sudan. Israel says that Iran’s Quds Force was behind the shipment of Syrian-made M-302 rockets to Sudan, for eventual transfer to Gaza. Iran denies any connections to the ship or its cargo.