Janati Warns of Moderates’ Takeover of Assembly of Experts and Majlis 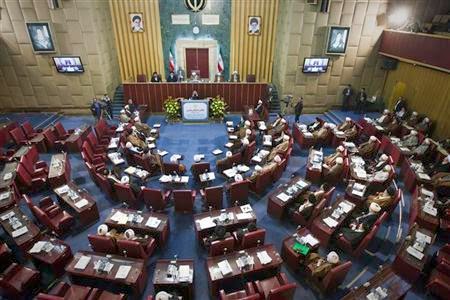 Ahmad Janati, the powerful chairman of the Guardian Council, charged with supervising the elections, on Sunday warned that certain groups, presumably the moderates and reformists were after “capturing” the Assembly of Experts and the Majlis after succeeding in capturing the presidency.

“These days those who just captured the first bastion, are after capturing the Assembly of Experts, and later the Majlis, to implement their corrupt goals,” Janati said. (IRNA, 30 March)

By the first bastion, Janati was referring to the presidency which was “captured” by Hassan Rouhani who represented the moderate/reformist bloc in the 2013 presidential election.

“The election for the Assembly of Experts is very much tied to the foundation of the Islamic Republic… They (moderates/reformists) have dangerous plans. They now want to capture the Assembly of Experts because that's the only institution that can choose/change the (supreme) leader,” Jannati added. “They have lots of money and some are in the center of power today.”(IRNA, 30 March)

Janati’s fears are clear: the moderates led by Rafsanjani and supported by the reformists will try to field numerous candidates in the next Assembly of Experts elections to win an outright majority, a first in the Islamic Republic. The Assembly has always been controlled by the right. By controlling the Assembly, the moderates will position themselves in par with Ayatollah Khamenei and his supporters, and politically will elevate the power of Rafsanjani as Khamenei’s co-equal.

The Assembly last held its election in December 2006 for an eight-year term. The new elections are due in December 2014. The hard right is fearful that if a comprehensive nuclear agreement is reached by July, the moderates will parlay that success into a victory in the Assembly elections.

Janati was also fearful that if the moderate/reformist bloc wins the Assembly, they will position themselves to win the next Majlis elections as well. Those elections will be held in March 2016. By controlling the presidency, the Assembly of Experts and the Majlis, the moderate/reformist block would then be the actual governing body of the country for the first time in the history of the Islamic Republic.

Like the early to mid 00's, the prospects for the IRI center-left (what American observers refer to as "moderates") and political left are to a certain extent impacted by American and Western decisions and relations toward the IRI. Any repeat of '03/'04 would have the same dooming effect toward the center-left and left that it had on the Khatami administration.

There are no "moderates" amongst the lying vile mullahs, their only goal is self-survival and continued fleecing of Iran and its immense wealth. They have turned the world's 2nd largest gas and 4th largest oil reserves nation into a bankrupt pariah. The only solution is a regime change to free Iran from these parasites.

The best and most succinct commentary on the IRI's phony "reformists" I have read is by the excellent blogger, Potkin Azarmehr:

And BTW, before he died, the notorious and deranged Ayatollah Khalkhali (aka the Hanging Judge) also joined the "refomist" movement! Definitely worth reading is his obituary in The Economist:

Interesting that some of our readers believe there are no moderates in Iran, no factions based on politics or policy, yet still choose to read posts on Iranian politics. If the political outcomes are always the same, and have been the same in the past 35 years, then there is no need for political analysis; it makes the life easier, no?

Mr. Uskowi, there are, indeed, different Khomeinist factions within the IRI and have been from its earliest days. However, are there any individuals in the Islamist regime's organs at any level who are not followers of that one holy individual, i.e. Emam Khomeini? Even one? What meaningful "reforms" were achieved during the 8 years of "reformist" Khatami? Surely, political analysis of the various acts of jockeying for power and wealth and the infighting between this and that Khomeinist faction should acknowledge that overarching reality of the Islamist regime, no? What exactly distinguishes a moderate Khomeinist in substance (as opposed to packaging, presentation, and rhetoric) from a non-moderate Khomeinist?

Uskowi,how can there be moderation in a regime that is based on a rigid ideology of Khomeinism? Haven't the supporters of the regime quoted,"We follow the line of Imam"? Which means,"we are not for change". These people have been analysed for over thirty five years now and have shown to work against Iranian interests and not giving an iota about Iranian people. They all strive to preserve the status quo of the failing theocracy.

Is anyone assuming that the "moderates" will succseed in lifting all major sanctions soon........then they shouldn't be afraid of moderates....

But I am a realistic one, and think that the West's plans and new elections there, may not create sufficient good faith attitudes on their side.

No matter what labels you prefer to use, there were significant differences between Rafsanjani, Khatami and Ahmadinejad administrations. I call them moderate, reformist and hard right within the current political system in Iran. Not being able to see the differences, and indeed not taking advantage of those differences, would be missing an important aspect of Iranian politics.

So I suggest that these days we should see and be aware of the differences between the bloc represented by the coalition of Rafsanjani/Rouhani/Khatami, what I call the moderate bloc, and the hard-right led by Khamenei and supported by kinds of Mesbah Yazdi.

Uskowi, lets not be misled by those charlatans within the current political system in Iran. The only differences is in the amount of money those individuals have stolen while in power. They play hard cop and soft cop games to fleece and control the Iranian people with. Left or right makes no defference because they are dedicated to the memory of their beloved Khomeini.