Half of U.S. spooks believe rockets on Klos-C headed to Sinai not Gaza 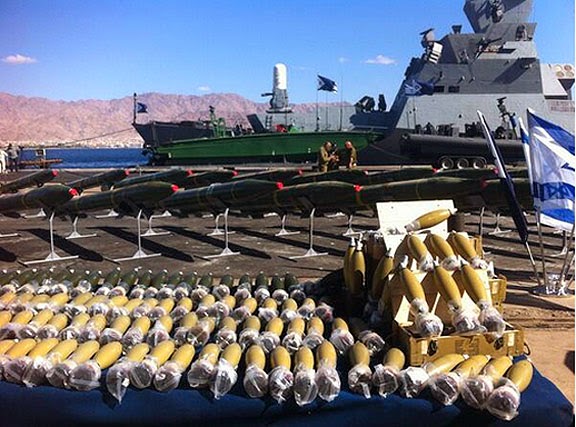 Above: 120 mm mortar bombs and M-302 rockets taken from Klos-C
(IDF on Facebook)


Some U.S. intelligence analysts and Middle East security officials believe that a rocket shipment seized by the Israeli navy in the Red Sea this month was destined for the Egyptian Sinai and not for the Gaza Strip, as Israel says.

A U.S. official and two non-Israeli regional sources said Israel appeared to be insisting on the Gaza destination in order to spare the military-backed interim Egyptian administration embarrassment as it struggles to impose order in the Sinai.

"Were the Israelis to say the rockets were going to Sinai, then they would also have had to say who in Sinai was going to receive the rockets," one source told Reuters, adding that such a statement would draw attention to the insurgents resisting Egypt's security sweeps in northern Sinai.

There now appears to be no clear consensus as to where these arms were ultimately destined.

It's been pointed out the rockets are too large and not intended for breakdown, making them impractical for smuggling into Gaza. The next guess is they were headed for Sinai. The 7x62 small arms ammo is now thought by some to be headed to other parts of Africa. And while most intelligence sources believe the mortar bombs were headed for Gaza, the off-loading of the entire shipment was actually to take place in Sudan, with ultimate destination(s) open to what appears now to be conjecture.
Posted by Mark Pyruz at 1:15 AM

Maybe the U.S. Treasury has it right:

The Iranians/IRGC-QF are supporting Al-Qaida and the Al-Nusra Front against the IRGC-QF/allies in the Syrian conflict.

And by extension of this logic, the IRGC-QF facilitated rocket shipment that originated in Syria made a big circuitous loop aboard the Klos-C and was intended to return to Syria , in support of Al-Qaida and Al-Nusra Front against the IRGC-QF and its allies.

The Israelis say the rockets were headed to Gaza via Sudan. If true, that would mean going to the Islamic Jihad and probably Hamas. Those are the groups active in Gaza. Why then do you argue that if Israeli assertion were true, the IRGC-QF would have been supported Al-Qaeda and Al-Nusra Front against the IRGC-QF/allies in Syria? Islamic Jihad is not Al-Qaeda. They could have used the rockets against Israel.

The Reuters piece quoted here says “some U.S. intelligence analysts and Middle East security officials” believe the rockets were headed to Sinai. Your headline, however, says that half the American intel community believes so. Are there any reports out that show that considerable portion of the intelligence community were supporting this new thesis? That would be significant, as compared to some analysts and two non-Israeli regional (Arab) sources, as Reuters puts it.

Right Nader, but the Israelis claim the rockets are Syrian-made M302. This would mean they were made in Syria, then travelled from syria to Iran, then boarded by ship to Sudan and back to Gaza from Sudan to Gaza. Thats a pretty long and indirect way of getting syrian rockets to Gaza dont you think?

The Reuters article does in fact say "half of U.S. intelligence analysts thought" in the second paragragh below the subtitle "Rockets hard to smuggle". Only in the first sentence do they say some. Here is the article below
http://in.reuters.com/article/2014/03/25/israel-egypt-gaza-rockets-idINL5N0MM2QL20140325

Secondly Hamas and Iran havent been getting along much lately as Hamas is distancng itself with Iran. It even went so far as to back the Syrian rebels against Asad and Hezbollah. So if these rockets are from Iran to Hamas, Mark is right that they would be likley going into the hands of guys who would use it against Assad, and Irans ally. I dont see Iran's government rewarding such open disrespect and betrayal with shiploads of rockets. There are plenty of other palestinian groups I think Iran would rather arm than Hamas.

It's interesting if Reuters could have polled "half of U.S. intelligence analysts" to get their read on the story. Doubt it very much if Reuters would have resources or the capability to do so. I am sure their report reflects the opinion of some analysts and the two Middle Eastern security officials who talked to them.

The issue here is not the route the Israeli believe the QF took to deliver the rockets. Sinai is as far as Gaza. Not much possibility that QF could send the rockets to either of these locations directly from Damascus.

Groups other than Hamas could have been the beneficiaries if what the Israeli said is indeed true; the Islamic Jihad is a logical choice and was here referred to.

ANOTHER Testament that IRAN has been always on the truthful side of any clumsy accusations from the WEST in general and Israel in particular!.

Am I reading your comments correctly that there were no shipment of arms by Iran to either Gaza or Sinai? And it's the "West" that is lying? Your claim is based on what? Do we have to see a contract signed by the Quds Force and the Islamic Jihad, for example, to say that a ship that had left an Iranian port, and was carrying rockets hidden under cement bags, and heading to Sudan, was very likely intended to deliver the arms to some militant groups in the region?

At the same time, satelite images of a fake wooden ship being built in Bandar Abbass to be used as a movie prop was plastered all over the news so that they could "call Iran out" on what they initially thought was going to be a propaganda target. But they never once thought of taking pictures of the Klos C docked in an Iranian port. Why are there no satellite images of these rockets being loaded on the Klos C?

Lastly you dont find it strange that Iran would ship weapons to Palestinians then cover it with Bags of cement, that say in English instead of Persian "Made in Iran".

This one is also good at scratching below the surface to see that the whole story is a bit strange.
http://peacenow.org/entry.php?id=3839