The 15th Session of Iran’s Assembly of Experts opened in Tehran today. Senior officials are expected to address the assembly during its two-day event on the state of nuclear talks and the country’s economy. 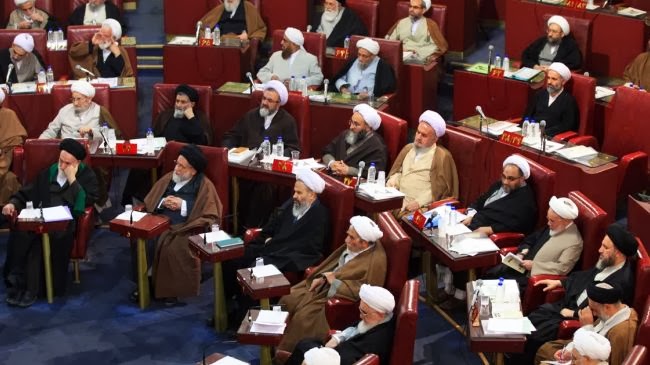 “Iranian officials and the negotiating team are in the position of safeguarding the Iranian nation’s principles and rights, and they will not cross the red lines,” said Ayatollah Mahdavi Kani. (IRNA/Press TV, 4 March)

Minister of Economic Affairs and Finance Ali Tayyeb-Nia will address the Assembly on Wednesday amid growing concerns over persistent high inflations rate, which was reported last month by the Central Bank of Iran to be at 38.4 percent, and negative economic growth.

The Assembly of Expert is an all-cleric body that sits twice a year to review national issues. In choses the country’s supreme leader. The election for the new Assembly is set for the spring.

A coalition of moderates, led by current the president, Hassan Rouhani, and former presidents Rafsanjani and Khatami, is expected to field many candidates for the Assembly seats in order to pass some of them through the Guardian Council’s political vetting process, controlled by the hard right.

Capturing the Assembly after winning the presidential election last year will be a huge step for the moderates to establish themselves as the ruling coalition in the country. The election for a new Majlis is also due in 15 months.

Ayatollah Mahdavi Kani replaced Rafsanjani as chairman of the Assembly of Experts three years ago. The head of the Guardian Council is Ayatollah Ahmad Jannati.

Fortune smiles upon our nation blessed with such experts!

Haha! What does that really says? These group are so smart to stay in power of people they rule are not so smart to allow this??