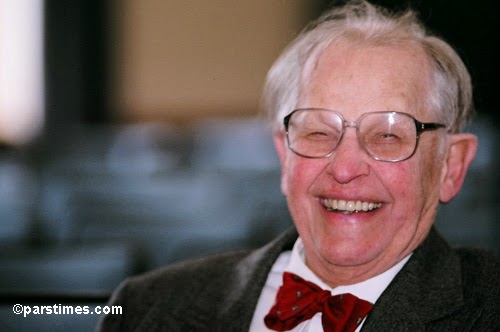 Richard Nelson Frye, the prominent scholar of Iranian studies, whose unending search for Iranian-American friendship was the stuff of legends, died on Thursday in Boston. He was 94.

Professor Frye, born in Alabama, and longtime professor of Iranian studies at Harvard, had expressed his desires to be buried on the bank of Zayandeh Rood in Isfahan, the city he loved so much. This is what he wrote on the subject:

“I, who have spent all my life on studying and teaching the glorious culture of ancient and Islamic Iran, request that my body be buried next to Zayande Rood in the beautiful city of Isfahan, the place I have admired and loved all my life, hoping that this would make for close ties between the two great nations of Iran and America.”

We’ll miss him so much during these delicate times in Iranian-American relations. May his memories live forever!

A truly great man. His wish is to be buried in Iran.

May he rest in peace. My deepest condolences to his family and loved ones. i hope that his wish is honored and he is allowed to be buried at Zayande Rood.