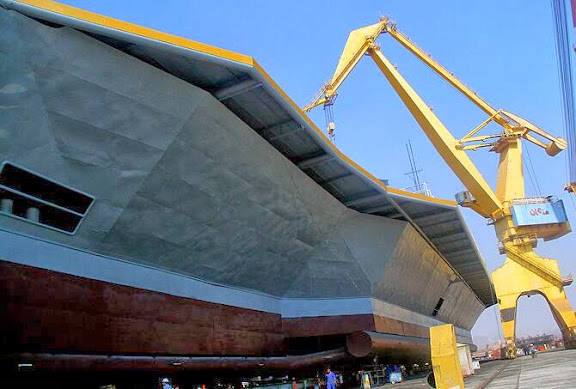 Above: Nimitz class replica aircraft carrier being built by Iran at the ISOICO shipyard near Bandar Abbas


A replica of a US aircraft carrier spotted near the coast of Iran is a set being built for a movie which will display the US Navy warships' downing of an Iranian passenger plane in 1988, the Iranian media said.

[T]he Iranian media said on Sunday that it was "part of the decor and stage settings" of a movie being made by Iranian director Nader Talebzadeh on the 1988 shooting down of an Iran Air civilian plane by the USS Vincennes.

We'd identified possible purposes for this Nimitz class replica as providing Iran with a functioning target ship and non-operational technology study (similar in its limited rendering to that of the Qaher-313). However if a feature film prop reflects an additional shared purpose to the two previously identified, it may reflect a clever means of justifying such an extravagant and relatively expensive project.
Posted by Mark Pyruz at 12:44 AM

That makes absolutely no sense,if they were going to build a mock up of anything it would have been the Vincennes,not an aircraft carrier.This isnt capable of being used as a real carrier so that only leaves the test target option,as for the ordnance thats going to be used against,well I guess we`ll just have to wait and see

Anyway, they haven't wasted money despite financial problems under the sanctions.

It could be both: first use it for the movie later target it. smart with a limited budget,

Nimitz wasn't even in the Gulf at that time.