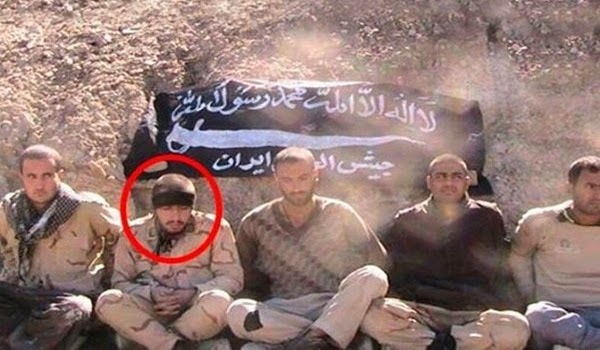 UPDATE: Iran has confirmed that the militant Baluch group Jaish ul-Adl has executed one of the five border guards. (Fars News Agency, 25 March)

The militant Baluch group Jaish ul-Adl on Sunday announced the execution of one of the five Iranian border guards it has kept in detention since abducting them on 6 February in Jakigour region, on Iranian side of Baluchistan.

Jaish ul-Adl announced the execution on its Twitter account. It identified the slain guard as Pasdar Corporal First Class Jamshid Danayeefar. The group said its action was in retaliation of the recent execution by Iran of one of its own members. The group also said it would deliver Danayeefar’s body to the authorities in return for 50 bodies of its members it claimed to have been executed in Iran.

Today, Iran’s official news agency IRNA conformed the report of the execution, citing an informed source in Pakistan. The Iranian Interior Ministry, however, denied the report. Its spokesman said, “We don’t confirm this report; were it true, we would have been informed.” (Fars News Agency, 24 March)

Iranian Interior Ministry did not say who would have informed them if the report were true. Jaish ul-Adl is believed to have transferred the guards to Pakistani Baluchistan. If true, then the powerful Pakistani intelligence service, the ISI, with its vast presence in the province, should know about the location where the guards are kept. IRNA and Interior Ministry did not disclose the sources of their conflicting reports, or whether the Iranian authorities are coordinating their actions with their Pakistani counterparts and the ISI.

The Iranian authorities had said in recent days that they were negotiating with the militants for the border guards’ release, without disclosing the terms of such agreement. Now that Jaish ul-Adl has announced the execution of one of the guards, it is not clear if they would still pursue negotiations, as opposed to engaging in military operations, including sending in the IRGC’s Special Forces, that they had hinted last month, to free the rest of hostages.

Pakistan is terror central and is the operating and facilitating base for the Wahhabi cannibal terrorists that are attacking Iran on a regular basis now. This is the reason that the Saudi and Bahraini petro-pimps are funding this dirt poor failed state to the tune of $2 billion this month alone. Iran needs to do more than merely close the Chaman-Taftan border for the Norooz holidays. Iran needs to toughen up its resolve and actions. All trade and passage of Pakistanis through Iran must be stopped completely and the border sealed with fortifications and other surveillance equipment. Unless the cost to the failed Pakistani state is increased they will continue sponsoring anti-Iran terrorism. Enough is enough.

I agree. I don't understand why Iran cannot deal with these animals. If US feels justified to send drones thousand of miles away to kill these cockroaches why Iran cannot do the same? Forget about Pakistan. That is not even a country and they would not do anything even if Iran bombed Islamabad. Just throw few missiles into their camps. For once learn lessons from America. There is no point in appeasing terrorists.

Pakistan is the worst neigfhbor of all. not even Afghan Border is so unsecur as Pakistan
The best should to mine and block the border totaly.
Stop any Trade and Person Traffic.
The coffe cocholate are at the payroll of CIA and Saudis. They are lair and Iran will get nothing good fromn this animals

The main issue facing Iranian policy maker on this issue is not Pakistan. It's Iran's own Baluchistan. The region is still one of the least developed regions in the country. Lack of proper attention by Tehran not only works against economic development in the region, but reinforces the perception on part of the majority Sunni population that the Shia-dominated central government does not care much about their province, their culture, and their well being. The most effective and rational way to defeat terrorism here in the long run is through a concerted campaign by the government to bring economic and social revitalization to Baluchistan. IRGC Special Forces and other law enforcement agencies could only offer short-term solutions, which might be needed here, but not as a final answer in resolving problems facing the Baluch.

IRGC benefits much from transshipment of goods, legal or otherwise, from Baluch areas of Afghanistan and Pakistan into and through Iran. Are you counting them as members of your animal kingdom as well?

have you cared to look closely the governments economic ,and trade development plan for this province in the current financial year?. many goodies there from the central Government !-otherwise rare good appreciated advise from your part!.

Tarzan, Lord of the Apes said...

God bless you my man B.M.A.