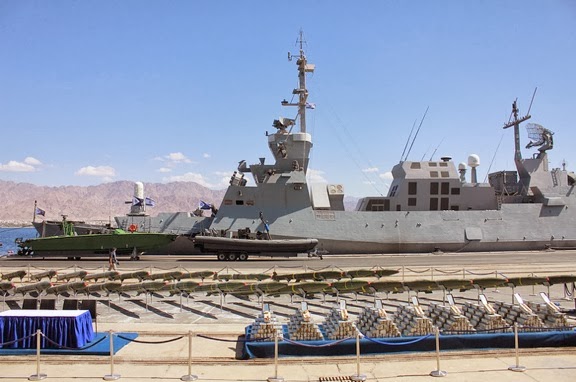 
Last week the Israeli navy captured a ship in the Red Sea carrying arms that the military said included forty M-302 surface-to-surface rockets manufactured in Syria and capable of striking most of Israel from the Gaza Strip.

Along with the missiles, some 180 mortar shells and 400,000 rifle rounds were laid out in neat piles on a pier in the southern port of Eilat. A navy missile boat that took part in the raid was docked behind the display.

At the IDF presentation, Prime Minister Netanyahu took the podium to exhort that Iran is "fooling the world" with its nuclear negotiations. However, that Iran is pro-Palestine is no secret.

Some Middle East observers speculate that if the military balance between the Israelis and Palestinians were not so overwhelmingly lopsided in Israel's favor, the Israelis might well negotiate peace in a more honest and forthright manner. Netanyahu's display of the mighty INS Eilat as a backdrop to what can be described in tactical terms as a quite limited logistical supply of cheaply produced 302 mm unguided artillery rockets, 120 mm mortar bombs and 7x62 mm small arms ammunition, well illustrates this enormous disparity.

However, the M-302 rockets do possess a modicum of potential deterrence last seen during Israels's Operation Pillar of Defense, where Palestine's surprise employment of Fajr-5 type rocket artillery may have indirectly contributed towards the IDF not launching a ground force incursion similar to that of Operation Cast Lead.

Photo: IDF on Flickr
Posted by Mark Pyruz at 2:35 AM

I have always marvelled at Israelis mastery at PR, but in this occasion they are making a fool of themselves by overdoing it.

They are not fooling anybody. 302mm is manufactured in Turkey, China or Thailand according to http://en.wikipedia.org/wiki/List_of_rocket_artillery Haven’t they been accusing Iran all along arming Syria? Now they are accusing Iran taking arms away from Syria (which is currently at war) fly it all the way to Iran. Was Iran running out of artillery missiles or was such a shortage they had to import it from Syria they are in the middle of the war they don’t need it. Why not Iran just gives them 333mmm that it manufactures. That would save Iran the transportation and inherent risk of explosion while transporting. How likely Iranians then put some cement around it with very identifying mark as Iranian cements. This is Israelis advertising we are smarter than everybody we discovered it caught them red handed. Tto give the fiction little twist to make it more like clandestine act. The ship goes to Iraq. Keep in mind Iraq buys its cements from Iran. Once in Iraq the ship loads up cement. Yes I can see that making sense. What a coincidence AGAIN as discovered last time weapon shipment at the same time Bibi is in Washington yelling at AIPAC the big bad Iran is coming to get us. He is gonna come and get you too. We are all going to fall victim to Iran. Give us a few more billion dollars of your hard earned tax payer’s money. Don’t we have special relation? If you don’t do it president Obama look how we destroyed President Carter by our well controlled media when he criticized us.

Zionist Israel continue to behave like a school yard bully only good at harassing defenceless Palestinians. It is no secret that if the Palestinians had the same level of armaments like the Israelis then palestine-israeli conflict would have long been settled and lasting peace attained. In fact this failed lie of the zionist regime only made it obvious that the easiest way out of their predicament is for the palestinians to be moderately armed and the zionists would never dare attack them again without a second thought.

As for Iran there is nothing to hide or be ashamed of, they can only be proud that they are defending the defenceless against cruelty and injustices, have made no secret of this and are still standing tall. Damn the consequences. Many nations of the world are envious and proud of Iran's palestine policy even if they cannot openly admit it. In spite of all this demonisation Iran still got elected the leader of the largest international organisation (NAM) after the UN.

GENEVA: Iranian President Hassan Rouhani has failed to fulfil campaign promises to allow greater freedom of expression and there has been a sharp rise in executions since his election, U.N. Secretary-General Ban Ki-moon said on Tuesday.

Rouhani, who won a landslide in June, led Iran to an initial nuclear deal with world powers. But, perhaps wary of further antagonising powerful hardliners, he has not made significant reforms at home that moderate voters had hoped for.

In a report to the U.N. Human Rights Council, Ban highlighted the prevalent use of capital punishment in Iran and called for the release of activists, lawyers and journalists as well as political prisoners that he said were in custody for exercising their rights to free speech and assembly.

"The new administration has not made any significant improvement in the promotion and protection of freedom of expression and opinion, despite pledges made by the president during his campaign and after his swearing in," Ban said.

"Both offline and online (news) outlets continue to face restrictions including closure," he said.

that was quite funny. thank you

The way ban and amano as been acting in their positions goes to reveal the state of the political socialisation process in their society and political weight of their respective nations in the world. Both their nation has America military base in them and are semi sovereign so over time they have been producing politicians with semi independent views. As the saying goes in my country "you cannot plant onion and expect to harvest okro."

AnonymousMarch 11, 2014 at 5:19 PM
Would you rather iran just turned a blind eye,or blamed it all on the palestinians or perhaps went along with chanting the wests favorite "israel has the right to exist" mantra,tho I notice that the west has never once said that palestine has the right to exist,funny that eh?