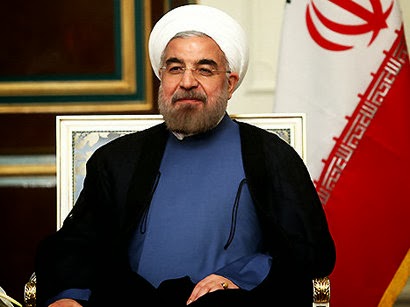 In a letter to Vice President Esshaq Jahangiri, Iranian President Hassan Rouhani has ordered an immediate investigation by government agencies for identifying and punishing sanctions profiteers.

“To take the country’s economy out of recession and create an economic boom, it is vital to ensure transparent and secure environment for economic activities. It is necessary to take immediate measures to identify and punish those who by taking advantage of special (anti-sanctions) concessions and privileges that have been granted them to enrich themselves through corruption and illegitimate income,” wrote Rouhani in his letter. (Mehr News Agency, 28 December)

“Cases of abuse, especially regarding the sanctions, should be prioritized, and a report should be presented within a month,” Rouhani added in his letter.

To defy sanctions, the Iranian government had devised schemes to receive payments for its oil and gas exports. It allowed “private” companies, usually fronts for IRGC and the Quds Force, to sell as much as 20% of oil exports in black market. The experience, however, created “sanctions brokers,” like the notorious Babak Zanjani, to misuse their government-backed access to illicit money transfers to amass personal fortunes in shortest time. Zanjani, who entered the oil “business” in 2012, after the sanctions were imposed, boasted to reporters that he was now worth $10 billion.

Another case was the now-infamous “gas-for-gold” scheme, where Iran sent gas and oil to Turkey in return for gold bullions. The Iranian sanctions broker involved in that scheme, Reza Zarrab, was arrested in Istanbul last week and claimed that Babak Zanjani was his ‘boss” and contact in Tehran. The case has now directly involved Iran in the growing government corruption scandal in Turkey.

UPDATE: For a Central Bank of Iran report on Zanjani, please click here.

An investigation of corruption in the U.S. is real, and leads to arrests. An "investigation" in Iran is just bullshit by which a third world country run by crooked and dishonest thieves pretends like it's civilized.

Rouhani was very sincere and serious about the situation. Some arrests could be imminent.

The whole regime is crooked and dishonest.Rouhani has been part of the same regime for over 34 years.Now as "president" it is his turn to thieve from the country.

OK who is goingh to be arrested? The IRGC and Guds force members responsible with some influential MPs plus Khameini and Rafsanjani's sons. Frankly Rouhani will have more chance of winning a given lottery than arresting these crooks. Interesting is that most of these crooks have set up dual nationality already. Just recall the head of Bank Melli (if I am correct), resigned after than few billion dollars theft, sais sorry to the supreme leader, got a flight to Germany (unhindered) and went to the land that gives assylumn to every crook these days, namely Canada. Don't hold your breath for any break-through!

Nader, perhaps you could provide a rationale for the Rouhani administration scrapping the bar coded "shabnam" labels that were intended to reduce smuggling.

When will Rouhani address the subsidy issue, with actions of his own?

Hey the crook Zanjani is worth $13 billion and can buy himself an independent island if he wished. He also has a Danish passport. The likelehood is that he would escape to Denmark,UK or Canada and will ask for political asylumn because he will plead that his life is in grave danger. THen someone would stand up and claim that neither Iran or Turkey are shining examples of human rights so he should stay and of course bring his money in.

You're a naive person mr. Uskowi if you think the truly responsible and profiteering people will be arrested.

How many times had this disgusting regime of thieves thrown one of their own under the bus for something they all did?

This is what will happen to Khamenei and his thugs one fine day...

Gaddafi was found in a hole, just like Saddam >>> http://www.youtube.com/watch?v=hVmSa0hRC8Y

Mark, both are important questions. Let me answer subsidies, which I have followed closely.

Rouhani needs to present his own subsidy reform program, and soon. The fault with Ahmadinejad’s was not the idea of scrapping most of the government subsidies, but the monthly cash payments that helped create the current inflation rate. And at the end, he did not scrap all subsidies, but kept handing out the cash; worst of the situations. If handled properly, this could have been Ahmadinejad’s legacy, something that no prime minister or president could have accomplished, although they tried, since Hoveyda.

Rouhani needs to announce his commitment to subsidy reforms, including subsidy to large government projects, something Ahmadinejad could not do. He also needs to replace the very costly monthly cash handouts, but at the same time come with a plan to help the poor after all subsidies are lifted. Hard task now, especially when people are used to receive their monthly allowances, but a necessary step to save the economy.

Zanjani was arrested today. I had expected imminent arrests in this case (my comments above, 28 DEC at 11:03 AM). Please also read our post today.

well that does not mean much. The administration had to do something to prove that they are serious. What is the chance of them going and arresting one of the big shots sons like Khamenei and Rassanjani? The answer is none and this is just a sacrificing a lamb because Zanjani is in Iran (credit that he was not on his way to Dubasi or Canada) and he is prepared to face the music which in this case will be a summary ehdam!