Obama Says He Can Envision Nuclear Deal With Iran 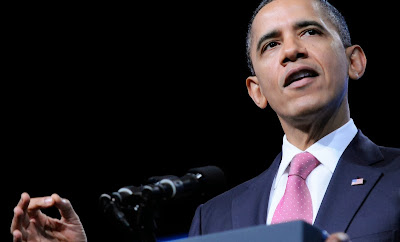 “President Obama said Saturday that he could envision a final diplomatic agreement with Iran that would let the country’s government enrich nuclear material for power production with enough restrictions to assure Israel and the rest of the world that it could not produce a nuclear weapon,” The New York Times reported today

“I wouldn’t say that it’s more than 50-50,” Obama told a conference at Brookings Institution’s Saban Center for Middle East Policy. “But we have to try.” (NYT, 7 December)


Obama repeatedly acknowledged that Iran’s leaders should not be trusted and said that the United States and Israel were united in their intentions to keep Iran from acquiring nuclear weapons.

What ever the secret deal was,it's been done already behind the scenes.Hence the "envision" nonsense.

Forced to drink the 'poison ' in the end!!,the empire can not move any further economically with IRAN out of its calculations!.

he said, the Iran should dismantle Fordo and Arak.
That is of course not acceptable. So I believe there will no permanent Deal with American.
some prelimenary Deals is good too, once the Sanctions are party lifted, they will not be easily again imposed.

Iran manufactures nothing of any great value ..... and the only important export that it has to offer is crude oil, which is available elsewhere and Iran's oil isn't used by the US.

The long-term objective of the U.S. and its allies is to convince Iran to dismantle its nuclear program entirely, as per John Kerry's official statement. The Iranian nuclear program will be rolled back bit by bit and in return Iran get some sanctions removed for each successive step. The whole idea is to make the Iranian regime understand that abstaining from nuclear technology altogether would be more beneficial to the country and its people. Any gains that could have been generated from the development of their nuclear program so far have in turn been severely negated by more sanctions. As it is now, Iran cannot cope with the sanctions that have been imposed on it. The choice is up to the decision-makers in Tehran in saving the economy and determine the future of the country.

BMA is just like the Mullahs in Iran." Por royi" and never admitting defeat and misrepresenting facts is a part of their being. Like when IRI had to sign the Ceasefire treaty with Iraq after all the barking by the Mullahs that they were going to defeat Iraq and go all the way to Israel.

Keeping America's pivot to Asia in mind and their eagerness to get out of the middle east, they certainly need Iran to play a key role in the security structure in the region.

There has to be a deadline for lifting all western sanctions, unless it will give Russia free hand to lift its all sanctions with Iran and there some deal could be possible...

what is rthe benefit if iran dismanzle every thing and leave the nuke energie.

Iran is allowed to sell creude oil and take paper $.
f.ck such benefits.
nothing will be dismkantled, nthing will be stopped.

"Iran manufactures nothing of any great value ..... and the only important export that it has to offer is crude oil, which is available elsewhere and Iran's oil isn't used by the US.

You're the one with the ignorant attitude, as a man that hates the Accomplishments of his own people you are the biggest loser on this Blog, The U.S. was defeated in Iraq, and has lost the respect of the free world as we know it, Central and South America, all of Asia, and Eastern European Countries all want to do business with Iran. Iran has a burgeoning Car Industry that will eventually break ground in Europe, a state of the art, booming construction Industry, competitive technology, which is far more economically cost effective, than it's European counterpart. Iran doesn't need the USA, in any stretch of the imagination! But America needs Iran to relieve her of the duties of her crumbling former Empire, and to negotiate her world debt with Asia and Russia, only Iran can restore her Integrity and convince the world that their is some decency in the Great Satan.

Your immaturity and juvenile like behavior will have no effect on the future of the Iranian people! your undying state of denial and unwillingness to accept reality, which America herself has now realized that she needs Iran! the Poles of Goodwill, Human decency and ingenuity have shifted from the West to the East! if you choose to accept this fact ? you will be better off.

the US does not NEED Iran. the US would like to avoid having to resort to direct military conflict with Iran because that's neither a good thing nor really a necessary thing.

the people of the US like nothing about the nations of the Gulf other than the oil. they actually like the and respect the Saudis and other Gulf Arab states less than they like Iran.

the Americans din't understand Khomeini's hatred of the US and the idiot president Reagan thought that by offering friendship to the new Iranian regime, the regime would be won over and normal diplomatic relations would be restored.

that was foolish and the Americans slowly came to understand that Iran was governed by people who WANTED conflict with the US.